Huw hopes to kick on: “I was pleased to get over the line, but it was a frustrating day” 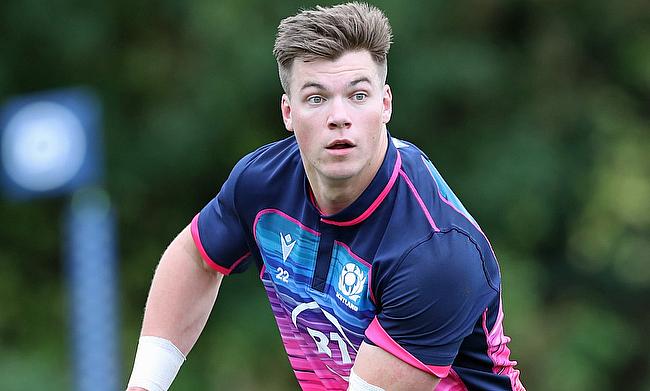 Match Centre: Scotland 24-27 Ireland
“Dave is tough and has a great attitude”: Cherry puts in hard yards to get to the top
Scotland recall Sam Skinner to Six Nations squad ahead of Ireland game
“Richie is a real grafter”: Hard work pays off for Gray as he prepares to head back to France

When Huw Jones scored 10 tries in his first 14 Test matches for Scotland between June 2016 and February 2018, it was clear that there was a special attacking player in our midst.

Indeed, when he bagged two tries against England in a 25-13 Calcutta Cup win at BT Murrayfield, the sky really was the limit for the then 24-year-old.

His silky running skills, great angles and excellent passing saw him make the 13 jersey for the Scots his own, but there were concerns in some quarters about his defence while, since joining the club in 2017, he seemed to have gone into his shell at Glasgow.

The way that he wanted to play the game and the style of then Warriors Head Coach Dave Rennie seemed contrasting and you could see the confident swagger disappearing from Jones’ demeanour with every game that he played for club and country.

He then missed out on the Rugby World Cup in Japan and by the time this current season rolled around, people were wondering where his career was heading.

However, under new Warriors Head Coach Danny Wilson he has begun to look a bit more like his old self playing mainly at full-back rather than centre.

With Chris Harris of Gloucester the first choice 13 for Scotland, Jones has had to bide his time at the top level and heading into the Ireland match on Sunday, he had not scored a try in 14 Test appearances.

When he joined the fray off the bench at Murrayfield against Andy Farrell’s men at the weekend, Scotland were 24-10 down and were chasing the game.

There were 23 minutes to play and Jones, in his 29th cap, wasted no time in making his mark. After 60 minutes, the 27-year-old, on at 13, took a pass from his skipper Stuart Hogg and ghosted past Irish defenders James Lowe, Hugo Keenan, Jamison Gibson-Park and Garry Ringrose to score from some 22 metres out.

In the end, that try and another converted effort from back-row Hamish Watson were not enough as a late Irish penalty gave them the 27-24 triumph, but for Jones, his first Scotland try in over three years felt good.

“It was quite a relief to get back on the scoresheet again as it’s been a while,” Jones said to TRU after his 11th Test try.

“I was pleased to get over the line and score a try, but it was a frustrating day on the whole for the team. It is quite clear that my biggest strength is my attacking play and if I am scoring tries, then that can only be a good thing.

“For me to be playing at my best, I need to be attacking really well and either creating or scoring tries. It is tough [to win back the starting number 13 jersey]. I have been working hard in training and I have played a lot at 15 of late before starting for Glasgow at 13 a few weeks ago.

“I am just trying to do the best I can with the opportunities I get and fulfilling my role as best I can within the Scotland squad and if that is coming off the bench and making an impact, then that is what I have to do.

“Chris [Harris] has been playing at 13 and doing well and playing really good rugby, so I have to keep up my form when I get the chance to play.”

“The main thing is to try and keep my form levels as high as possible.”

Despite being born in Scotland and schooled mainly at Millfield in England, it was a gap year in South Africa in 2012, which sparked Jones’ rugby career.

He played for the University of Cape Town and the Western Province age-grade sides before turning out for the Stormers and catching the eye of then Scotland Head Coach Vern Cotter five years ago.

11 - Huw Jones has scored 11 tries for @Scotlandteam since making his debut in 2016, only Sean Maitland (12) has more in that period (Hogg also 11); Jones had failed to score in his last 14 Tests before today. Relief. pic.twitter.com/BJoWRHGsu3

As mentioned, he made a flying start to life in dark blue, but over the last three years, he did wonder if he would ever find his 2016 to 2018 form again.

“Yes, certainly [I thought I might not get back to try-scoring form],” he states.

“I have had times in the past where I thought I might not get back into the Scotland matchday squad, but I am grateful and thankful for the opportunity to play when I do.

“I would love to stay in the picture with Scotland [when, if expected, he moves to Bayonne in France this summer] and continue to play Test rugby.

“As far as I know, any move won’t affect that. The main thing is to try and keep my form levels as high as possible so that when it comes round to Scotland selection, I am in the picture.”

“We’re going to have to stick together and pick ourselves back up.”

Meanwhile, Scotland Captain Stuart Hogg does not want to be chasing the game at any point against Italy on Saturday at Murrayfield.

The Scots have done that at times against Wales and, more so, Ireland in their last two outings - and with both ending in defeat, the away triumph over England on February 6 now seems a long time ago.

“Against Ireland, I thought we just lacked that clinical edge at times and the big thing we talked about in the changing rooms after the game was about chasing the game. We believe we’re a lot better than that and unfortunately, we’ve had to chase 24 points which isn’t ideal.

“But look, what’s happened has happened. We can’t change it. We’re going to have to stick together and pick ourselves back up because it’s a six-day turnaround and another chance to represent Scotland.”

Scotland take on Italy in the Six Nations at BT Murrayfield at 2.15pm on Saturday live on the BBC.