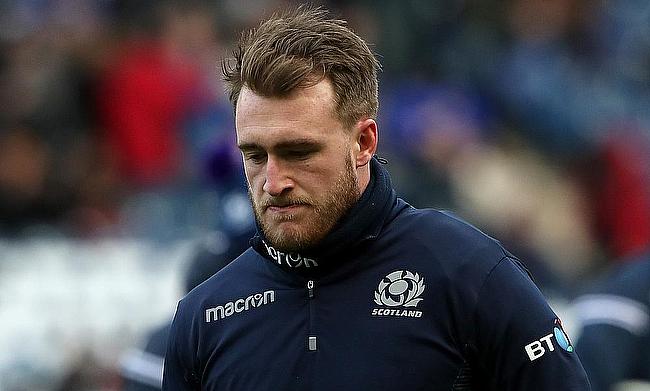 Jack Cosgrove Column: 'England are an excellent side, but there will be a quiet confidence in the Scotland squad'
Cameron Redpath to make his Scotland debut in Six Nations game against England
“It’ll be a good battle” - Hamish Watson looking forward to breakdown contest
“Emotionally we were put through the wringer”: Twickenham 2019 from a Scottish perspective

When debutantes Cameron Redpath and Dave Cherry were given the opportunity to lift the Calcutta Cup on Saturday evening at Twickenham, it was far more significant a moment than just a good photo opportunity.

It showed that Scotland captain Stuart Hogg is slowly but surely building a strong culture within the squad, almost a ‘family away from family’ in bubble life with a group of guys who are playing for each other.

Individual brilliance can sometimes win games, but you are far more likely to win consistently if you play as a collective. That is what Hogg’s men did at the weekend to end their 38 year Twickenham hoodoo on the 150th anniversary of the famous fixture.

One 11-6 victory does not make a team world beaters by any stretch of the imagination of course, but it was the manner of the triumph that pleased every supporter north of the border so much.

There was a cohesion among the 22 players used which perhaps has not always been seen in the last 18 months. Hogg has impressed on his men to think about who they are playing for when they take to the field, their family members who cannot be in stadiums just now and who have helped them get where they are.

Bath centre Cameron Redpath was cool as a cucumber despite being only 21 and playing in his first Test, but even he must have felt a little misty-eyed when he was able to speak to dad Bryan and mum Gill via Zoom from the changing rooms afterwards.

Yes sir, we can boogie too ??#AsOne pic.twitter.com/kIuWPliBgS

Other family members, including his grandad Dave Hall, were on his mind too and he told TRU: “It was really nice to be able to see my parents on a call soon after the game, dad [who won 60 caps for Scotland] was buzzing!

“The whole experience was very exciting, all the lads are buzzing, I am buzzing, and it’s unreal to be a part of it.

“It couldn’t have been a better first cap. I wanted to get involved in the game as much as I could. I wasn’t nervous at all which is the best feeling for your first cap.

“I felt like this was the right time to come into international rugby [England were also keen on the former under-20 cap’s services] and Stuart Hogg was in touch quite a bit saying he felt that I could play a massive part for Scotland.

“For me, it was the right time personally, but he also had a massive part to play in my decision and it was good that he presented me my cap on Saturday after the match.

“The way we play as a squad is enjoyable for fans and enjoyable for us as players and that was a massive appeal for me. This all came at the right time.”

“I knew they were watching. They are an inspiration to me.”

Replacement hooker Cherry - the 30-year-old Edinburgh Rugby man who has put in the hard yards to reach the Test match arena – was also able to see some of his family members on the Zoom call after the match.

And for fellow hooker George Turner, who put in a near-flawless 68 minutes or so in his first Six Nations start, thoughts immediately drifted to his family after full-time.

Daughter Elizabeth - known as Lilly - was born just a few weeks ago and his wife Madeleine, son William and stepson Campbell were all watching from home.

“I knew they were watching. They give me a great incentive to do well and are an inspiration to me,” Turner said. "It hasn’t quite sunk in that we have won, but for us to triumph at Twickenham, it is such a good feeling.

“We felt really confident going into the game, but I was nervous, more nervous than I had ever been, this was the biggest match of my life and I couldn’t watch the last 10 or so minutes after I had to come off, it was really tough.

“It was the biggest game of my career, England away at Twickenham in the Six Nations and it was huge, but during the anthems and after kick-off, I just tried to see it as another game of rugby.

“I got a good tackle in early doors and in a couple of early scrums and lineouts, I felt comfortable and I just wanted to keep playing.

“We felt comfortable out there. I am so happy it is hard to put into words. It was such a massive occasion.

Although Scotland only won by five points in the end - their scores coming through a try by winger Duhan van der Merwe, with Turner involved in the build-up, and two penalties by stand-off Finn Russell - the victory was more comfortable than the scoreline suggests.

“We felt in control out there,” Turner states. “We spoke about it at half-time and even with a yellow card at that point [Russell was in the sin bin] we felt good and we felt like we had left points out there at that stage. We could have had more [they were 8-6 to the good then].

“That is testament to the work rate and the strategies put in place and we were ‘on’ it for the whole 80 minutes.

“We have just been thinking how amazing this win was, but we know there is more to come from us in this campaign and we can’t wait to keep it going against Wales this coming Saturday [February 13 at BT Murrayfield].”