Exclusive: Bryan Byrne - We don’t have time to worry about others 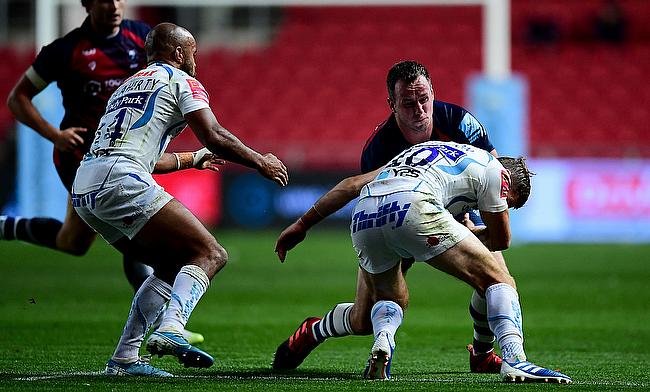 Having joined Bristol on loan towards the end of last year, Bryan Byrne permanently moved to the Bears in June after the hooker had spent the best part of six seasons in Dublin playing for Leinster.

In that time, Byrne was part of a squad that won the Champions Cup once and the Pro14 twice. Having represented Ireland U20s on various occasions too, the 26-year-old came to Ashton Gate with an impressive CV and in the search of regular playing time having been behind three senior Irish internationals for his province.

Now three games into Premiership Rugby’s resumption, Byrne has started in two of Bristol’s fixtures, contributing to their win over Saracens and playing in midweek against Exeter Chiefs. Despite their 25-22 loss against the league leaders, the forward says that he and his teammates have taken huge learnings from Tuesday night.

“The clarity is there and people know their roles inside out and we've taken learnings from Exeter because there definitely was learnings there of how to close out a game better when we go into the lead," Byrne said. “What we would have done differently, making sure that everyone has got a clear plan, that's what we are learning.”

Having led until the final quarter against Rob Baxter’s side, Bristol were still impressive regardless of their loss. Prior to Tuesday’s fixture, Pat Lam spoke to TRU and other members of the press about the culture that he is trying to introduce to the side.

For Byrne, it is much of the same with the ‘know your role’ mantra being something that he has experienced his entire professional career. At Leinster, it was very much the same message making it a simple transition for Byrne going from an established centre of excellence to a new one.

“Even detail wise, the clubs are similar,” Byrne said. “They have high detail around moves and everyone has to know their roles inside out, so it was a pretty easy transition. Once I got to grips with the different moves that Pat would have, it was an easy transition because I was used to learning stuff and being driven by that higher standard and high detail.

“I have really enjoyed it. There is a really good buzz around the place and a seriously good group of lads. It makes you want to train each day. We really celebrate the wins and Pat, and everyone, makes sure that you are enjoying yourself as well even just the small things, but it means there is a really good atmosphere and culture about the place.”

Having played in the midweek game against Exeter, Byrne has been rested for Saturday’s trip to Manchester. Starting in his stead is Will Capon whilst current academy man George Kloska is filling out the 16 jersey.

Since his arrival in Bristol, Byrne has swapped places regularly with Harry Thacker which has seen a huge increase in playing time for the former Leinsterman. It was, of course, his desire to get more minutes that led to his move to the West Country and he is already reaping the rewards.

Playing for a side aiming to become England’s most dominant club, it already seems as though Byrne and all of Pat Lam's players are well on their way to achieving just that. Saturday’s game is a clash of second versus third after Sale’s win over Wasps earlier this week saw the Sharks move to within three points of their visitors.

“Every game is obviously very important and they’re around that top four spot, so it is a game that we put a lot of emphasis on,” Byrne said. “They have big ball carriers, a few South Africans in the pack and in the backline, so it is about fronting up and that has been the message driven that they’re a momentum team. They try and play on top of you, strong mauls, a strong set piece, so the message is fronting up and the people who are picked are there to do a job.”

Sale were impressive in midweek at Wasps as a seemingly second string squad came away from Coventry with a 20-11 victory. Many of their star names, like Tom Curry and Manu Tuilagi, did not line-up at the Ricoh, but Steve Diamond has thrown them straight back in against Bristol.

“At this stage, when the games are coming so thick and fast, we don’t really worry too much about who is playing in the week (for Sale) so we will be more worried about the game at the weekend,” Byrne said. “We are kind of taking it each game at a time. I know that is a cliché, but we don’t really have time to worry about opposition, who people are picking on a Tuesday or Wednesday night, because we are playing them on Saturday.

If Bristol do come away from the AJ Bell with a win on Saturday, the Bears will stay on their journey to becoming England’s top side and Byrne is certainly committed to that cause, even if it is one game at a time.

“We definitely have goals to win it, but that is the end goal. In terms of week to week, we are focusing on each game as it comes.