Capon is flourishing at high-flying Bristol 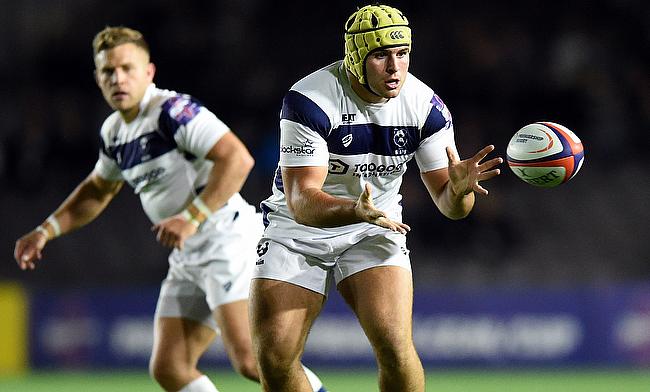 TRU Podcast - The Life and Times of an Academy Player
After Cokanasiga masterclass, Anderson is focused on stopping Fiji in World U20s
From sitting school exams one week to facing the haka the next: Rory’s remarkable rise
Discipline stopped us against Ireland - Dingwall

Will Capon dislocated his shoulder 12 months ago, but a year on, the Bristol Bears hooker is relishing his time with one of the most exciting and ambitious teams in Europe.

Will Capon begins our chat by discussing the rain which descended on the West Country on Thursday, but right now, it seems like nothing can dampen his spirits or the atmosphere surrounding Bristol Bears.

Capon’s development as a player has followed the same upward trajectory displayed by Pat Lam’s side but having made his Gallagher Premiership debut in November, as well as earning his first senior start for Bristol in the Challenge Cup, the last 12 months has not always been smooth for the 20-year-old.

He reflects on dislocating his shoulder last December and the ‘road bump’ he encountered ruled him out of the U20 Six Nations Championships at the start of this year.

“A lot of the goals that I set were suddenly shattered,” says Capon. “I had to kind of go back to the start and rebuild with my rehab and prepare for a return to playing.”

However, he didn’t let his injury weigh him down. Instead, he worked hard to regain his fitness and his dedication to recovery was rewarded with a place in England’s U20 squad for this year’s World Cup in Argentina before Capon seized his opportunities when returning to club duty.

No-one can argue he isn’t in the right environment to fulfil his potential. The Bears are fiercely ambitious and they are not a club for wasting time. Capon clinched the Championship title with Bristol in 2018 and since then, there have been no backwards steps at Ashton Gate.

What a night to end a surreal season and an honour to be involved in the send off of club legends I remember watching growing up - massive thanks to @WinscombeRugby @BGSRugby @brfc_academy and my family for supporting me this far???? #champions pic.twitter.com/C38tqY5GiS

“You could tell when we won promotion there was no thought of surviving the Premiership,” adds Capon. “We were going up there and we wanted to thrive and we wanted to push to compete with the best sides in the league.

“I think we surprised a lot of people coming up last year. With our brand of rugby, a lot of people were sceptical that we would not be able to maintain that level of pace and that level of tempo when we came up against big Premiership sides. We’ve proved once again, with a group of boys sticking together, playing for each other and playing to our philosophies, that we can muck in with the best of them.”

It is clear there is a strong appetite for everyone involved at Bristol to also embrace the culture within the club. Capon reveals simply saying things such as ‘Good Morning’ to everyone is all part of creating an environment and a ‘buzz’ which allows players to flourish and freely express themselves.

For Capon, he is always hungry to learn. Even last year when he was on loan at National Two South outfit Dings Crusaders before his shoulder injury, he knew the value of playing at that level and didn’t take the experience lightly.

“Playing National Two, I definitely think I needed that exposure to men’s rugby,” he says. “There are a lot of things, when transitioning from Under-18s to seniors, that the Nat Two lads helped me out with. I am in debt to Dings Crusaders for giving me that opportunity.

“I think Nat Two rugby is a really important part of an academy players’ development and there are many other stars of the Premiership who have experienced the same.

“I feel this year I have been able to use my experiences which has helped with opportunities so I have just continued to work hard in training and listen to the feedback. I have pulled on the senior players at the club like Tom Lindsey and Harry Thacker with regards to game related work-ons and I think I have been able to step up when needed.”

When Capon has been called upon this season, he has certainly delivered. Against Exeter Chiefs, the hooker announced himself on the Premiership stage.

Bristol trailed 17-0 at half-time, but they produced a spectacular comeback to defeat Rob Baxter’s side and Capon’s pinpoint throw to the back of the line-out set the platform for their match-winning try.

Impressive showings in the Challenge Cup against Zebre and Brive are also moments which Capon savours and whilst he is able to rub shoulders with the likes of Nathan Hughes, Charles Piutau and the incoming Semi Radradra, the faith which Lam has shown in youth development is the overriding feeling which the 20-year-old is keen to stress.

“That Exeter game, even with some elevated goals with what I wanted to do this year, to come on and be in that scenario, execute my job at Sandy Park and to win the game like that is an experience I will never forget,” Capon says.

“I think being thrown in right at the deep end there, has meant I have learnt a lot. I had my first start in the Challenge Cup and I felt confident to go out there knowing that I can do a job at this level. I was working hard, getting on the ball and doing what I believe was the performance aspects of my game which got me into the Bristol academy in the first place.

“Pat is really good about giving players opportunities. Since he first came to the club, it has been one of his philosophies. One of his key mantras is that he wants players to be better than when they first came into the environment both as people and as athletes.

“The way he has been giving the likes of Ioan [Lloyd], Toby Fricker and Charlie Powell, amongst others in the club, the opportunity to go out there and work on their game is brilliant and then the level of detail and feedback you see on that Monday review day is incredibly valuable. I feel as though, as an academy, we have all come on a great deal since Pat has come in and given us opportunities.”

Another chance to shine has presented itself to Capon this weekend as Lam has named the hooker in his starting XV when Bristol face Stade Français on Saturday evening in the Challenge Cup.

The Bears lead Pool Four having secured maximum points thus far and they’ll be keen to build on the 37-11 victory they achieved over the Parisian side on matchday three.

Bristol have made no secret about their targets in the Challenge Cup this season and whilst the West Country outfit also sit second in the Gallagher Premiership as things stand, Capon isn’t shying away from his personal ambitions as well as the aspirations of the club.

“Obviously our overall goal is that we want Champions Cup rugby so top six is our bottom-line standard for the season,” says Capon.

“When looking towards the weekend, sides across the Top 14 and the Premiership, they are all capable of beating each other. We have done our analysis, and we have what we believe is a good plan to go into the weekend and win. We just take it game by game. We keep our processes the same and hopefully we celebrate the work we have done on the Saturday.

“I think personally, I want to continue working on my game this season. I think it is quite easy when you are given opportunities to get ahead of yourself so it is good to have players around me who I can talk to and keep me grounded to make sure I am not looking too far ahead. Hopefully then, any further opportunities at the club will flow from there.”