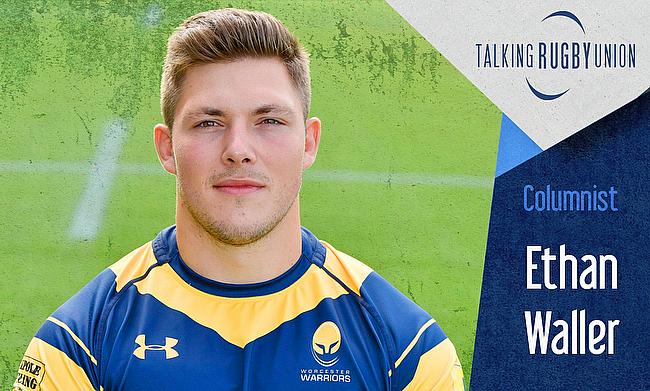 Josh Beaumont Column: It was a special day and one I will remember for a long time
Simon Hammersley Column: After the high of last year, this season has been incredibly frustrating
Johnny Leota Column: My National One experience and life after rugby
Sebastian Negri Column: We believe in the journey we are on

TRU are delighted to announce our new columnist for the 2019/20 season; Ethan Waller. The Worcester Warriors man will be offering his expert insight when it comes to the Gallagher Premiership as well as the Rugby World Cup.

Keep your eyes peeled for Ethan’s columns, but for starters, here is a little introduction from TRU’s latest signing….

I always battle with starting an article or blog. It’s by far the most demanding portion of the entire process, as I’ve got to do something that will hopefully capture YOU, the reader, into staying interested just long enough to read the rest of my bollocks. (Ooo he said bollocks! He’s edgy. He’s different. What other borderline curse words could this literature include? Let’s all read on and find out. It’s enthralling…).

With that out of the way, I’ll let you know as to why I’ve suddenly popped up on your timeline or news feed.

Predominantly, I decided to get involved with TRU, as professional rugby comes with a surprising amount of downtime. Whilst a large percentage of this is used sleeping and eating, there’s also a window of opportunity for those who are willing to take it. After a number of years melting my brain in front of an Xbox (other consoles are available), I thought it was best to focus on getting some sort of safety blanket in place just in case this whole gig doesn’t got the way I planned!

So I’ve been busy setting up a small business with my brother, which is our own little pizza trailer named Slice Slice Baby. This is up and running now, coming off the back of an extremely busy summer with an exciting number of events planned for the future.

I put our fairly quick start down to a number of things, but I’m fairly sure the main catalyst was that I was writing a blog alongside our journey. It was updated every few weeks on our website, and it lit a bit of a fire in terms of writing. It’s also the digital equivalent to hearing my own voice (narcissistic box ticked). With that being said, I saw that TRU tweeted about helping young, ambitious writers that wanted to get involved with the media, which led me to slide in those DM’s and now here we are!

I suppose I may have jumped the gun slightly with the whole pizza business story, as I haven’t given any context as to where the idea actually came from. The seed was actually planted a few years back. Long story short, my old man and I have been in a band together for the last 10 years. We regularly do wedding gigs, one of which was held at this little farm.

Dough ready for a few hungry party goers tomorrow afternoon! We never knead (??) to buy it in, you can always count on our dough to be made with love (and a bit of graft) and rested for 24 hours to give it some unbelievable flavour. ???????? #SliceSliceBaby #MobileCatering #PizzaTrailer

Glorious views, the occasional farmyard animal roaming around the place, the slight whiff of manure, a truly magical setting.

The pièce de résistance, however, was without a doubt the spread. The quiche, vol-au-vents, & chicken legs had all made a swift exit and were replaced by mountains of sweets, fudge, cured meats and cheese. In addition to that, out back was a man in a van, dishing out pizzas like you’ve never seen. The man was busier than a one-armed trombone player but he was creating some glorious eats.

As the band, we got the food included as part of the price. Despite my aggressively sloppy rig, I’m never one to turn down food, so I wasted no time in taking advantage of that offer. To be fair to the old boy, it was exceptionally good. With no offence intended, you wouldn’t look at this fella and say “Oh god yeah. This guy for sure is a pizza chef”. He had the aesthetics of any man you’d find in your local country pub, nothing Italian about him as far as I could tell.

The man could cook. He just had a small menu that was done well. Four pizzas - Margherita, pepperoni, Hawaiian and a spicy veggie. Obviously some decent ingredients, and some time dedicated to mastering his craft. Everyone at this wedding must have had a pizza at some point and, with the exception of us, paid £7 for the privilege. With a fairly large wedding, I don’t need to do the maths for you to internally say….

Now I wouldn’t say I was inherently lazy, but I’m certainly a procrastinator. I’ve got an embarrassing attention span which is probably why this idea took nearly three years to get any sort of return on. Nonetheless, we’re cooking on wood now and starting to churn out some unbelievably tasty discs of deliciousness.

As for this current moment in time, I can’t wait to get stuck into working with TRU on a more regular basis. So keep an eye out and join me on my attempt at this joyous journey of mediocre writing. If you managed to read to the end, thanks! Drop me a tweet - @beef324 - if you have any thoughts/opinions for my next instalments, and if you enjoyed this you should check out my other blogs on SliceSliceBabyUK.com/Blog.