Bath’s Tom Dunn: ‘My advice would be to grab university rugby by both hands and run with it’ 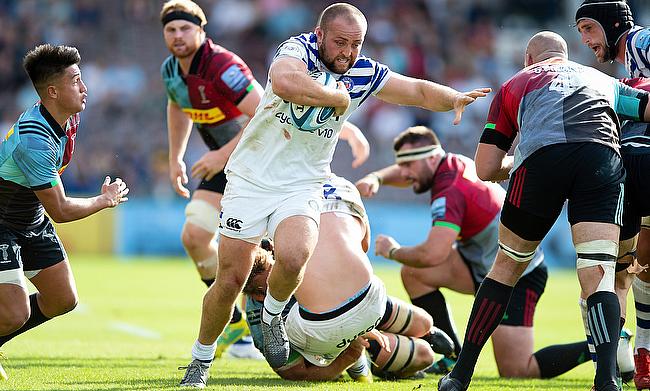 University of Bath topple Exeter to send title race to the wire
Leitch: 'I have been given loads of support and that has given me the opportunity to play for my country'
Josh Beaumont heaps praise on university rugby
Greenwood: “You won’t find a bigger fan of University Rugby than me”

Remember back to the inaugural BUCS Super Rugby season. The top tier of university rugby had been revamped and in the first ever final in 2017, Hartpury prevailed against the University of Exeter.

On that day, the Gloucestershire institution were captained by Sebastian Negri with teammate Harry Randall lighting up Twickenham as Hartpury snatched victory. On the opposite side, players such as Tom Lawday and Jack Owlett battled hard for Exeter at England HQ and since BUCS Super Rugby was introduced over three years ago, the league has continued to develop.

The division has expanded from eight to 10 teams over that period, but one of the key successes for BUCS Super Rugby has been the pathway it provides players.

Just google the aforementioned names of Negri, Lawday et al and you will see why, but it isn’t just Hartpury and Exeter who are producing top athletes. Current Harlequins starlet Alex Dombrandt graduated from Cardiff Met University last summer while England 7s player Will Muir studied at Northumbria University before taking the next step onto the World Series circuit.

Indeed, all 10 of the current BUCS Super Rugby sides are offering players a route into the game and none more so than the University of Bath. Last Friday night, Aaron James’ side travelled to Northumbria University and eight Bath Rugby academy players were included in his matchday squad.

Team News | Eight Bath Rugby Academy players will feature for @UOBathRugby this evening as they travel to Kingston Park to face @NorthumbriaUni, kick-off 19:00.

The likes of Will Partington, Arthur Cordwell and Jack Davies were involved in their 44-36 victory at Kingston Park, but the pathway between Bath Rugby and the university isn’t a new concept.

The Bath hooker recently made his 100th senior appearance for the club he joined as a 15-year-old and over the last couple of seasons, he has also been in and around the England set-up.

Dunn made his debut for Bath in 2012 against Calvisano in the Amlin Challenge Cup [European Challenge Cup] whilst he was still studying and the forward admits his time spent at the university played a major part in his personal journey in the game.

“It was awesome and it was a great opportunity to play,” Dunn tells TRU. “To be in the front-row when I was younger, I didn’t get a lot of game time at Bath Rugby level if that makes sense, but at university, I got some game time to show what I was about.

“I got to develop my on-field and off-field game. I have now got that foundation degree in my pocket to fall back on whenever I need, but I also learnt a lot of life skills whilst at university.

“The University of Bath were awesome at working around my schedule so I had private tuition and one-to-ones with my lecturers around my training. You can’t move the team’s training around your lectures so my advice would be to grab university rugby by both hands and run with it as fast as you can!”

Two recent trailblazers for Bath’s link between their academy and the university are Will Britton and Tom Doughty. Both players have captained their club in BUCS Super Rugby over the last couple of years and Dunn was keen to credit the two forwards, who have had to work hard to gain their opportunities.

“Will is very similar to myself,” reflects Dunn, who represented England Students during his time at university.

“He was in the academy until he was 18. He grafted and wasn’t given that full-time contract, but he grafted for the university which kept his foot in the door and that led to him playing A League and earning himself a contract.

The #PremRugby7s gets underway today and we spoke to @bathrugby's Tom Doughty who is relishing the opportunity of featuring at Franklin's Gardens. #unirugby pic.twitter.com/Q3Ga9AvLE2

“I really do have a lot of respect for those boys and I know how difficult it can be. It can feel a little bit more special when you put in that hard work and the link is getting stronger. Once you get that opportunity to get in that professional environment, you have got to grab it with both hands.”

The relationship with Bath Rugby and the university is continuing to grow as each year passes. Students are getting to experience the professional and impressive environment of Farleigh House during different stages of the season and that can only be a positive.

The current crop of University of Bath players are embroiled in a fascinating BUCS Super Rugby title race following a recent spell of good form and Bath Rugby are also experiencing a purple patch.

Todd Blackadder’s men may have fallen to a narrow defeat against Northampton Saints last weekend, but in all competitions, Bath have won five of their last seven games.

On the domestic front, the club occupy seventh place in the Premiership table as things stand, but they are only seven points off the top four.

Bath have successive fixtures at the Rec over the next two weeks against an in-form Harlequins and champions Saracens, but Dunn is targeting a positive outcome. “We have taken six points from our last two games. We want at least another six points to put us up around that top four mark because the teams we are playing are around that mark as well.

“Losing last weekend was a real tough pill to swallow because of the way we lost. It is tough to get back up from that because we were all very disappointed, but we have still got the belief as a club and confidence as a team, that we can go and do a job. That is instilled in us and that is not going to wavier.

“These two games are massive and we are focused on this weekend and trying to work out how we are going to beat Quins.”

Bath Rugby will take on Bristol Bears in The Clash at Twickenham on Saturday 6th April. Tickets available from just £15 for adults and £5 for children by visiting bathrugby.com or calling the Ticket Office on 0844 448 1865.