Sebastian Negri Column: The word I would use is surreal. I am living a dream 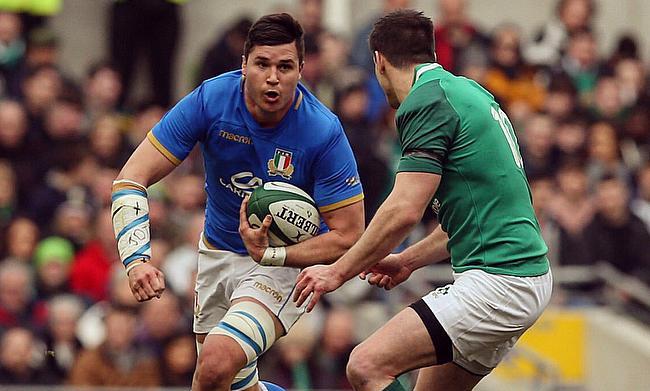 In his first Taking Rugby Union column, Italy’s Sebastian Negri says it has been a surreal year for him as he prepares for his second Six Nations campaign with the Azzurri.

The last year has been surreal. Even going as far back as 18 months ago, I was just finishing Uni and now I am living a dream, but it is important to keep your feet on the ground because I want to keep getting better. I have looked back and I am very proud of what I have achieved. It has been almost like a whirlwind, but also, there is still a lot of hard work ahead and hopefully this is just the beginning.

I am in a really good place [with Benetton] at the moment. I am working under a great coach in Kieran Crowley as well as all the staff here like Marco Bortolami etc. These are guys that have all played numerous times for their country and obviously with Conor and the national team, I am learning a hell of a lot too. When you play under coaches like that, you are in happy place because they believe in you. That is really important to me, hence why I have extended my stay with Benetton.

Anytime you get called up for your country, I think it’s a special moment. Sometimes you have to take a step back and pinch yourself and realise these things don’t come around too often! I am delighted to be called up again for Italy and hopefully, I can take my form into the Six Nations and hopefully get a few opportunities to help the team.

Anytime you put your country’s jersey on, it’s a massive honour. I am extremely grateful every time I get an opportunity to do that. Last year’s Six Nations was a dream for me, but you have to look forward and believe in yourself that you can play at that level again. Playing international rugby is a massive jump from playing with your club so it wasn’t all easy, but it was an incredible campaign and I just want to build on that and do the best I can.

Old friends will unfortunately not be reunited…

Me and Jake [Polledri] are very close friends and we have been playing well together, but it is a massive blow for the team. I don’t think I need to tell anyone how useful he is as a player and a ball carrier! I know him and I know his character so he will come back better, strong and fighting fit.

At the same time, it does give other guys opportunities to put their hands up and we have got some good backrowers in Italy and I am sure all of us will be chomping at the bit to take our opportunities.

University link continues to be fruitful

You look at university rugby now and BUCS Super Rugby, it is a massive stepping stone into the professional game. I look at someone like Alex [Dombrandt] who I have played against twice this year with him at Harlequins and he is having a great season. It is really good to see guys stepping up from university to play at the highest level. It was good to actually have a word with him after the game because you carry those relationships from university into your clubs.

When I played against Alex when he was at Cardiff Met, he stood out so it doesn’t come as a surprise to see him doing well. He is playing with a lot of confidence and it is great to see that. I am sure this is just the beginning for him and for many of the other guys coming through.

Progress at club level is positive for national side

It [Benetton] is a good journey and path to be on at the moment. There is a great unity within our group and I am learning from everyone around me every day.

It has been an awesome season so far. We talked about it at the start of the season and the aim was to continue to improve on last year’s campaign. It is a step in the right direction.

We are now fighting for qualification into the knockout stages of the Pro14 and the same with the Challenge Cup. That comes down to the wire this weekend when we play Grenoble away. We need to make sure we win that and if some results go our way, we could easily find ourselves in the quarter-final which people would say would be unheard of! However, there is a lot of belief within the group.

I think for Italian rugby, to see clubs like Benetton doing so well is great. The numbers in the Italy squad speak for themselves. 18 players in the squad isn’t actually a surprise because we are playing really well. If we can take those combinations that we have at club level into international level, I think that will make Conor’s life easier!

Hopefully we can use that familiarity and take it into the Six Nations to showcase how we are developing.