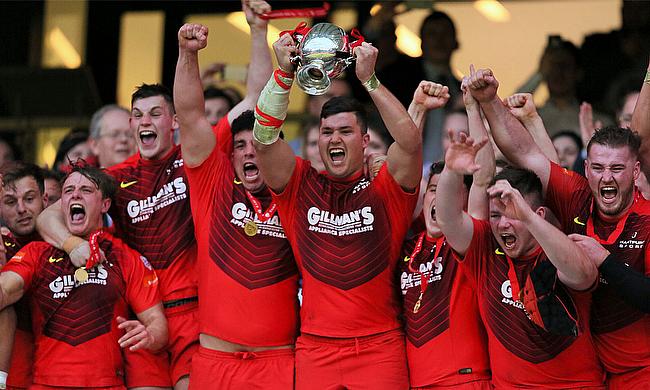 Two quick-fire scores from Harry Randall proved to be the difference as Hartpury College beat the University of Exeter 27-24 in a pulsating BUCS Championship final.

Tries from Aaron Bagwell and Tom Eliet helped last year’s BUCS Championship winners into a 14-3 lead but a score on the of stroke half-time by Hartpury’s Maliq Holden reduced the deficit.

Ted Landray stretched Exeter’s advantage to seven points with a penalty after the interval, but Jonas Mikalcius’ converted touchdown brought the game level.

Randall then produced two moments of quality inside a four minute period which proved decisive and despite a late score from Exeter’s Callum Roberts, Hartpury held on to seal the league and cup double.

This battling triumph continued an excellent season for Hartpury College with them having already secured the National One championship as well as the inaugural BUCS Super Rugby title under the guidance of John Barnes and Sean Lynn.

Hartpury were led out by skipper Seb Negri with the squad containing a few of their National One regulars including Mikalcius, Randall and winger Harry Cochrane.

Exeter Director of Rugby Keith Fleming said before the match that the side that had lifted the trophy 12 months ago had lost a lot of its personnel, but this current crop of Exeter players looked more than comfortable at Twickenham as they dominated large periods of the opening 40 minutes.

The reigning champions enjoyed sustained spells of pressure as they bossed territory and possession with accurate slick passing and their edge up front was giving them a platform to work off.

It took Fleming’s side just eight minutes to open the scoring and it was no less than they deserved. Bagwell crashed over for the first try of the final after a fine pass from Charlie Wicks allowed the scum-half to cross.

Despite a decent response from the restart by Hartpury with Sam Leeming slotting over a penalty, Exeter continued to have the upper hand and it didn’t take them long to double their advantage.

Their second try of the afternoon seemed all too easy. A poor kick from Hartpury went out on the full and Exeter took full advantage of College’s mistake. From the resulting line-out, the Green and Whites set the foundations for Eliet who ducked his way through a disjointed Hartpury defence to score beside the uprights.

Once again, Hartpury looked to make immediate inroads from kick-off and having been second best for the majority of the first period, College were able to bring themselves right back into this final.

With the last play of the half, Negri shrugged off two Exeter tackles before Randall flicked a pass to Holden who touched down in the corner to reduce his sides’ arrears to four points at the break.

Hartpury looked as though they had grown in confidence towards the end of the first period, but any optimism they may have had was dented immediately as Exeter increased their lead just six minutes into the second-half.

The Green and Whites flew out of the blocks and after early pressure, Holden was sent to the sin-bin for hands in the ruck. Landray’s resulting penalty was successful taking his points total to 185 for the season.

Even though Hartpury were now a man light, they began showing resurgence and renewed intensity which saw them respond instantly to Landray’s penalty.

Mikalcius collected a superbly weighted cross-field field kick before finding Jamie Forrester who returned the favour as College’s winger dived over in the corner. Leeming added the extras and with just 20 minutes left, the scores were level.

Negri was stretched off with an injury shortly after Mikalcius’ score but Hartpury once again showed their character which had been on display in both their quarter-final and semi-final matches against Leeds Beckett and Bath.

It was a blow for Hartpury to lose their captain, but momentum was clearly with them and it was the individual brilliance of Randall which put College in front for the first time in this final.

The scum-half, who two weeks ago won a Six Nations Grand Slam with England U20s, used his intelligence to take a quick tap penalty before skipping past three Exeter defenders to score in the corner.

And Hartpury’s first BUCS Championship title since 2014 was ultimately sealed minutes later as Randall used his nous to snipe his way over from close range to give Hartpury a 27-17 lead.

But this fiercely contested final still had one final twist. With 76 minutes on the clock, Roberts dived over for a converted score to reduce the deficit to just three points.

However despite the late drama, Hartpury were able to hold on to add another piece of silverware to their growing trophy cabinet.

We'd like to thank @BamLifeDrink for sponsoring our coverage of the #BUCSRugbyChamp Finals at Twickenham. #unirugby

Also, stay tuned next week for our exclusive video highlights and interviews from finals day in partnership with BUCS. Take a look out our video of the 2016 Final: https://www.youtube.com/watch?v=jQhciqL0lQg