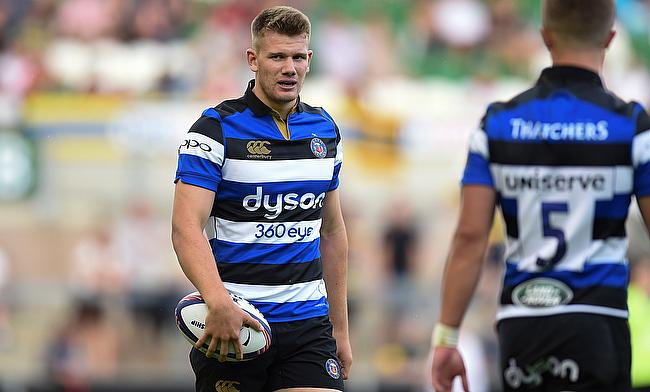 'We have not talked about winning the league' - Keith Fleming
University of Bath profit as title contenders stumble
How St Mary's University and Old Elthamians are paving the way for the future
Leitch: 'I have been given loads of support and that has given me the opportunity to play for my country'

Aaron James’ side scored five tries at Topsham to ensure the victory and it means Bath are only four points off the top heading into the final round of fixtures next week.

Third-placed Hartpury are also still in the hunt as their win over Cardiff Met University means they are seven points behind Exeter, but Sean Lynn’s side have two games left to play.

Below is a full round-up from another fascinating week of BUCS Super Rugby action plus, we review the last 16 of the BUCS Vase as well as some of the other top divisions in the country.

Ed Rimmer and Will Partington both crossed the line for Bath as the visitors scored five tries in total during an impressive display.

Full-time | Exeter 21-34 @UOBathRugby - A massive result against top of the table. Safe trip back to Bath.

Next up, a home tie against Loughborough on Wednesday 6th March.

Exeter’s only score in the first period came through Olly White, with Rory McMeikan and Matt Johnson adding further tries for Keith Fleming’s side in the second-half.

After back to back defeats for the table toppers, they are now only four points clear of second-placed Bath ahead of next week’s final round of fixtures when Exeter host Cardiff University and Bath entertain Loughborough University.

Hartpury University still have a chance of clinching the BUCS Super Rugby league title after a narrow victory over Cardiff Met.

A penalty and a score from Hartpury put the away side 10-5 up at the break, with Harvey Scott replying for Met.

Luke Northmore levelled the game, but three unanswered tries and another penalty put Hartpury 30-10 ahead with a quarter of the match remaining.

Harry Johnston converted his own try to reduce the deficit and Danny Milton’s side were able to salvage two bonus-points when Jack Wright crossed late on.

Hartpury’s victory means they sit seven points behind Exeter, but they do have a game in hand over the league leaders while Met’s top four place is still not confirmed.

Leeds Beckett University extended their unbeaten run to seven matches to stay in the conversation for a top four finish as they secured a victory over Durham University.

A try and two penalties gave the visitors a 13-0 lead at the interval in the North-East.

Big 13-7 win for the lads as we extend our undefeated run to seven games!

The hosts scored their only points after the break through a Luke Chadwick try, but in a very physical contest, Durham couldn’t add to their tally as Beckett’s excellent form continued.

Nottingham Trent University overcame Northumbria University to keep their hopes of moving out of the relegation zone alive.

They led through a Will Sutton try and a penalty, but Northumbria were able to cut their advantage to 8-5 with a score of their own.

However, touchdowns for Harry Clempson, Sutton, Cecil MacCarthy and Alex Goble gave Trent a 36-10 lead at the break, with the away side also adding to their total.

Both teams exchanged tries after the interval, with Harry Graham crossing for Trent, but Northumbria then mounted a fightback.

Darren Fearn’s men scored four tries to cut the lead to two points, but the home side clung on valiantly to seal a dramatic win.

Trent are now seven points behind ninth-placed Loughborough, with two games remaining in their season.

Cardiff University held off a spirited fightback as they beat Loughborough University to take a huge step towards the BUCS Super Rugby play-offs.

The visitors led at the break thanks to tries from Huw Roberts, James Jennings and George Thomas (2) as they took advantage of Loughborough’s indiscipline.

Austin Wallis scored Loughborough’s only points in the first period, but hosts clicked into gear in the second 40.

Sam Garvey, Max Hill and Jamie Cox all crossed to set-up a grandstand finish in the Midlands, but Cardiff held on for a crucial victory.

The Welsh side are now four points clear of Loughborough so if Cardiff pick up one point or more from their final fixture against Exeter next week, they will be competing in the play-offs in their debut BUCS Super Rugby season.

FULL TIME | It's a win on the road for Cardiff! They now find themselves in poll position to finish in the top 8 of #BUCSSuperRugby and book a place in the Championship rounds ??

Loughborough now find themselves in a tussle with Nottingham Trent for 9th and 10th place! ?? pic.twitter.com/fcxFBtEgwL

Cardiff University Head Coach Alun Wyn Davies: “It was massive. In this league, it is very difficult to go on the road and win so the guys deserved that tonight. We’ve had a few close shaves like the Northumbria game so I am chuffed for them.

“I’ll be shot for saying this, but we’re massively underfunded in comparison to other universities, but what we have got as a group has been fantastic. Our clear aim was to come up and stay up, but as a result of how we have played, we are looking like we are in eighth which is fantastic.”

“We always say we want to row our own boat and control our own destiny. By winning, we have done that.”

Man of the Match George Thomas: “I’m happy with the two finishes in the first-half, but it was a hell of a performance from the boys. We were clinical when we needed to be.

“It is a great spirit. First half of the season, we probably wouldn’t have been able to hold this game out because we lacked experience in the [BUCS] Super League, but as the season has gone on we have gelled, we’ve come into it and I think today showed how far we have come.”

Newly crowed Premier North champions Durham University finished the domestic season with a perfect record as they clinched their 10th straight victory by beating the University of Edinburgh 17-7. The only other fixture in the division saw Loughborough University defeat Northumbria University 27-14.

The University of Exeter have won the Premier South title after thumping Swansea University 76-0. Jo Yapp’s side are nine points clear of second-placed Hartpury with one game to go and despite the Gloucestershire outfit beating the University of Bristol 28-22, the league crown is going to Devon.

With both North A and South A concluding last week, the BUCS Vase competition began on Wednesday.

North A champions and BUCS Super Rugby play-off contenders Newcastle University continued their fine form as they beat UWE 71-7 to progress to next week’s quarter-finals. The University of Nottingham also advanced with a 37-12 win over Cardiff Met 2nds while the University of Edinburgh beat Bath 2nds 35-15.

The 1s are through to the next round of the cup while the 2s and 4s finish their season with two narrow losses. The 5s secured a walk over and have one game left as well as the 3s #40Geordies pic.twitter.com/zihaMUI3en

From South A, Swansea University are through after defeating Loughborough 2nds 47-21 while champions Hartpury 2nds won 32-22 against Bishop Burton College.

Exeter 3rds inflicted a first defeat of the season on St Mary’s University to keep their hopes of snatching the South B title alive. The Green and Whites won 35-34 in a thriller and now they are two points clear at the summit.

However, Exeter have completed all of their matches this term while St Mary’s have two games in hand so the second-placed side are still favourites to win the league. Meanwhile in South B, Cardiff 2nds beat Hartpury 3rds 19-14 and Cardiff Met 3rds took a huge step towards safety following a 28-23 victory away at the University of Portsmouth.

The University of Liverpool remain at the summit of Northern 1A after a crucial 21-10 win over title rivals Newcastle 2nds. Their lead at the top is three points as Manchester Met moved into second place after thrashing the University of Hull 69-0. Rob Jones’ side also have a game in hand over Liverpool and they have to play the Merseysiders before the end of the campaign.

Keele University remain on course for the Northern 2A title after beating Manchester 2nds 41-12 on Wednesday, but Sheffield Hallam University are still in pursuit as they secured a 21-15 victory over Lancaster University. Meanwhile, Liverpool 2nds defeated already relegated UCLAN 47-17.

A big win for the 1st XV who were unfortunate not to get all 5 points, winning 21-15 away at Lancaster.
2’s recorded a massive 41-5 victory against Leeds Uni!
And another big win for the Development XV beating Keele 47-7!! ???? #FullHouse #CoachShinlock@TeamHallam @HallamSports

In Northern 2B, champions Northumbria 2nds finished their season with a second defeat on the spin as they lost 18-13 away at the University of York.  Elsewhere, Sheffield 2nds beat Leeds Beckett 4ths 35-19.

Liverpool John Moores University have won Northern 3A with a 100 per cent record after beating Bangor University 48-7. LJM won all 10 of their domestic matches on route to sealing the title.

In Northern 3B, York St John University were able to clinch the league title as they beat rivals the University of Huddersfield in their final league match of the season. Leeds 3rds will finish in the top three despite losing 41-5 to Sheffield Hallam 2nds while York 2nds won 17-15 against Newcastle 4ths.

In Midlands 1A, the title was decided this week as the University of Leicester cliched top spot for the second season running after hammering Oxford Brookes University 50-20.

The other reason why they have been crowned champions is because rivals the University of Warwick had to settle for a 27-27 draw with Loughborough 3rds. Elsewhere, Harper Adams University completed their campaign with a 33-16 win over Nottingham Trent 2nds.

Midlands 2A champions the University of East Anglia beat Nottingham 3rds 38-24 to finish the season with a 100 per cent record and Nottingham Trent 3rds won 28-24 against Coventry University.