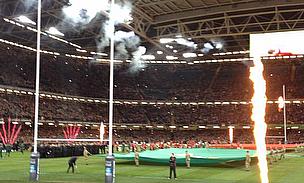 After another enthralling weekend of international rugby, with all of the world’s best teams in action, Talking Rugby Union wanted to bring you all of the scores, analysis and reaction.

After an important first win of the autumn for England over Australia last weekend, England continued their winning ways again this week, with a disjointed win over Argentina.

The game was a real match of two halves, as the home side raced ahead in the first stanza with three tries from Joe Launchbury, Billy Twelvetrees and Chris Ashton. However, in the second, England were disappointing throughout, with poor ball retention, hands and kicking, it was Argentina that were in the ascendency.

A late try from replacement back-row Ben Morgan sealed the unconvincing win for the home side, as they prepare and look to vastly improve ahead of the All Blacks visit to Twickenham next weekend.

The win left England unbeaten so far this season at home, with just one more game to come. However, Argentina slumped to their seventh successive defeat after a winless Rugby Championship earlier this year.

Away from Headquarters and over to France and the Stade de France, now, where the French welcomed the World Champions, New Zealand, in a repeat of the 2011 World Cup final.

The repeat victory left Steve Hanson’s side undefeated so far this season, with 12 wins from 12 attempts ahead of the clash with England next weekend.

However, New Zealand were made to work very hard in Paris, as the sides were locked nine-all at the break. In fact, the home side could have easily been ahead, if it hadn’t been for two penalty misses from Morgan Parra.

New Zealand raised the tempo in the second-half and made scoring two excellent tries - via Charlie Piutau and Kieran Read - look easy.

France replied through a top-quality score of their own from full-back Brice Dulin and finished the game camped on the New Zealand line.

In the end, the surface at the Stade de France let the home team down as it disintegrated, preventing the dominant French scrum from pushing on for a draw-saving try that certainly looked on.

“The All Blacks victory over France was closer than expected with France making up for a poor 2013 so far with an inspired performance – including some great offloads and some big Pacific Island players off the bench (something the All Blacks usually have) and some great scrumaging, although the scrums weren't helped by ground conditions.

“Charles Piutau provided some brilliance to get the All Blacks home, but now with Julian Savea set to return and an impressive return from Cory Jane against France, the All Blacks are left with too many options.

“It is a real testament to New Zealand’s development that they unleashed Ben Smith on the world this year and now they have done the exact same with Piutau.

“Smith is now a lot quieter in the Number 13 jersey. Another talking point from the game was why teams substitute their players no matter what: Dan Carter was playing well before being subbed off for Aaron Cruden.

“It seems that despite their age, both Dan Carter and Richie McCaw still have some life in them at test match rugby level.”

Adding to this, Scotty questioned whether: “is it my imagination or do the All Blacks not play well when they are not wearing black?

“Also, is Ben Smith really the best centre the All Blacks have got? Although given the plethora of other outside backs then he may just have to battle on and continue to play centre.”

South Africa began their northern hemisphere in impressive fashion as they recorded a 24-15 victory over Wales at the Millennium Stadium in Cardiff on Saturday.

A Welsh side, filled to the brim with Lions players from the tour of Australia earlier this year, were unable to replicate their summer heroics, as, this time, they could not out-muscle the southern hemisphere side.
The Springboks used their big men and rolling maul to devastating effect, outscoring the Six Nations Champions by three tries to none.

In a fantastic first half of test-match rugby the visitors raced to an early 17-6 lead, with tries from experienced centre Jean de Villiers and hooker Bismarck du Plessis. However, Wales fought their way back into contention, with two penalties from Leigh Halfpenny taking the sides into the break at 17-12.

Wales fought back once again as the teams re-joined the field, bringing the gap down to two points after another Halfpenny kick.

But a third try from Fourie Du Preez with 15 minutes left ended Welsh hopes of only a second ever win over South Africa.

The Welsh will look to recover from the early set-back quickly as they face Argentina in Cardiff next Saturday.

Head Coach Warren Gatland told the BBC that the South African players benefitted from a stronger grounding of rugby, after their second-place performance in the Rugby Championship, rather than the PRO 12 season for the Welsh players:

You could feel they [South Africa] were pretty organised," said Gatland after seeing his side lose in Cardiff.

"That's the big difference and the advantage that southern hemisphere teams have over us.

"Coming out of club rugby or regional rugby, talking to our players, and it's chalk and cheese, the difference."

Gatland added: "The opportunity that South Africa and southern hemisphere teams get to play at that level all the time, whether in the Championship or Super rugby, we get maybe four or five times a year.

"It's not the fitness or physicality, it's that tempo and speed of thought and it sometimes takes a bit of time to get used to it.

"The southern hemisphere sides have been together for a few months.

"That's why every autumn we want to play the best teams in the world because that's what prepares us.

"Ironically, it's almost like pre-season getting ready for the Six Nations but we don't want it to be like that because we want to hit the ground running and beat these teams.

"The players are disappointed, but win next week [against Argentina] and get three wins out of four and we'll be reasonably satisfied.

"It's just the fine margins."

New Ireland boss Joe Schmidt got his tenure off to a winning start with a dominant 40-9 victory over Samoa in Dublin on Saturday.

After an abundance of errors in a disjointed first half, Ireland began to find their feet and expose gaps in the visitors’ depleted defence; scoring three tries, including two for debutant Dave Kearney.

However, Samoa were slightly disappointing on the day, as the Islanders did not live up to their title as the seventh best side in the world.

Nonetheless, with sterner tests on the horizon in the shape of Australia and New Zealand, this was an adequate start to an new era and in the process, laid a solid foundation for what is to come.

Elsewhere, in the remainder of the weekend’s fixtures, Australia returned to winning ways with a comprehensive 50-20 victory over Italy in Rome; and in Edinburgh Scotland beat Japan by 42-17.