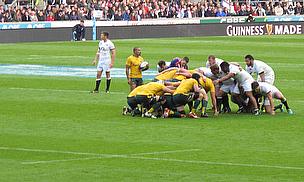 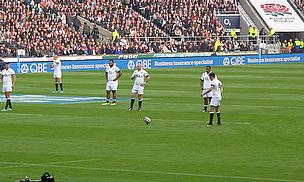 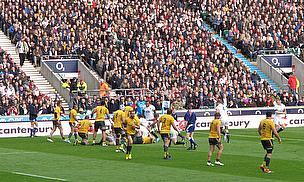 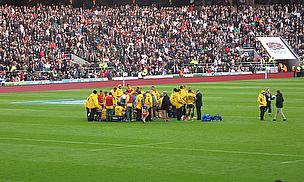 Australia remained on the field at half time
©Talking Rugby Union

A remarkable second-half turn around by England, saw two opportunistic tries from Captain Chris Robshaw and Owen Farrell turn a seven point half time deficit into a seven point win.

The game finished with England winning by 20 points to 13, and sealed the home nation’s first win of the QBE Autumn International series.

Furthermore, the win means England remain third in the IRB world rankings, with Australia staying one place behind in fourth.

The England side was filled with new blood and debutants, as Joel Tomkins won his first cap and winger Marland Yarde and number 8 Billy Vunipola made their home debuts in an England shirt.

The authoritative second half performance and important win for England, a decade on from that fateful Wilkinson drop-kick against Australia to seal the World Cup in 2003, will help Stuart Lancaster’s men as they build towards the home world Cup in less than two years’ time.

After the thundering roar of both national anthems echoed around Twickenham Stadium, England got off to the perfect start, with Owen Farrell kicking his side ahead with an early penalty.

Quade Cooper levelled the scores in an exciting opening period, as Dan Cole gave away a penalty for being offside.

Though, after such a confident opening attempt, Farrell went on to miss his next three penalties from a similar range.

It proved to be fourth time lucky, however, as England dominated possession and territory, and Billy Vunipola won his side a penalty that Farrell sent between the posts with a certain amount of relief.

A fine pass from Cooper sent Israel Folau through along the side-line, as he slipped past Chris Ashton. After a number of pick and goes, Australia, somewhat tamely, broke through the defence, as centre Toomua rolled England’s Billy Twelvetrees in a poorly attempted tackle.

Cooper added the extras, shortly followed by another penalty, to quickly extend to a seven point lead over the home side, as the teams left the field for the break.

In the interval the 2003 England World Cup winners paraded around the home of rugby, ten years on from that victory, hoping to spark a second half fight back into the current team.

After a shaky first few minutes, England managed to inject some pace and belief into their game, as Harlequins’ full-back Mike Brown – in slightly contentious circumstances, as his foot looked to be in touch when he caught the ball – brought the side up field after a piercing run.

After a number of other phases, young winger, Marland Yarde, showed his own incredible pace, as he steamed down the left wing, only halted by a brilliantly experienced covering tackle from Australia’s Adam Ashley-Cooper.

From the subsequent lineout, first, the ball was only just recovered by former Captain James Horwill, before, secondly, Will Genia’s clearance kick was charged down by Mako Vunipola, before the ball spurted across the front of the try line, with Chris Robshaw the quickest to react, as he burrowed over the line for England’s first try.

Farrell’s conversion levelled the scores at 13-13, with an enticing half an hour still left to play.

A number of important changes to the England side, which saw Ben Youngs, Dylan Hartley and Joe Marler, walk onto the field, seemed to make the difference for England.

Quick ball was once again spread into the hands of Brown, as he brought his side into an attacking position. Owen Farrell got his hands on the ball, and again somewhat opportunistically, saw a gap in the Australian defence, which he subsequently slid through to jog under the posts and touch the ball down for the score.

Australia were furious, as screams of obstruction rang round the visiting fans to Twickenham stadium. However, television match official Marshall Kilgore, was happy to let it pass.

Farrell once again added the extras, and extended England’s lead to seven points.

Cooper had the chance to bring his side to within four points, but sent a difficult touchline penalty well wide of the posts.

The England pack managed to stay strong, and show their superior muscle, as the home side managed to hold on for an important win.

The Australian loss was another disappointing result for the Wallabies, as they have still only won three tests so far this year.

Talking Rugby Union’s Southern hemisphere correspondent, Scotty Donaldson, brought us the reaction from down under:

“England beat the Wallabies and retained their position as one of the toughest teams in the world to beat at home.

“The cauldron or fortress of Twickenham is developing a reputation for being a graveyard for visiting teams.
“The Wallabies will be disappointed with this result after the controversial try to Owen Farrell should have been disallowed and the Mike Brown’s foot in touch before England's first try.

“It does defy logic that any Australian would lack confidence, but given the Wallabies have lost eight test matches this season, then it’s hardly surprising.”

Moving away from the game’s missed infringements, it is confidence that seems to be lacking for the Australian side; although, after suffering defeats to both the British and Irish Lions and their Rugby Championship rivals, it’s hardly surprising.

Australia will have to step up a gear if they are to maintain their position of fourth in the IRB rankings and have a successful autumn tour. The Wallabies travel to Rome next weekend to face the Azzuri at the Stadio Olimpico.

On the other hand, England, with plenty of wind in their sails, welcome Argentina to Twickenham on Saturday, before the World Champion All Blacks return to HQ the following weekend.

Look at our photo galleries for much more images from Saturday's game...