Altrincham Kersal: The rugby club which is helping to feed the community 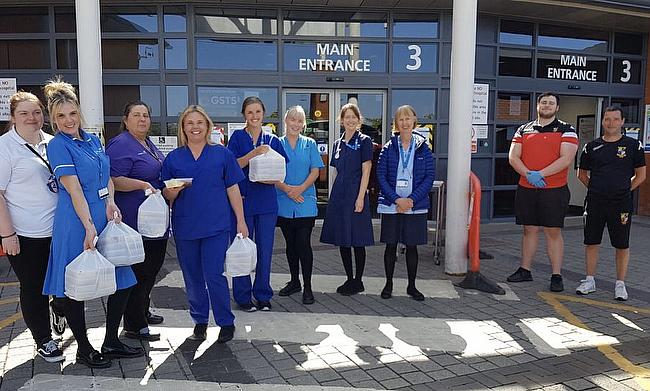 Barnes RFC's 'Big Lift' takes centre stage
“I put my hand up straight away to volunteer” – Henley prop Primett on helping to fight Covid-19
Watch: Will Hooley and Sam Leeming on the NHS Crossbar Challenge
Rory Hutchinson: We must give all the credit to the NHS

Altrincham Kersal has its local community at the heart of its rugby club. The shared passion for the sport brings people together from across the town and this year, the Stelfox Avenue faithful saw their side mount a late promotion push before the season was curtailed due to the coronavirus pandemic.

A six-match unbeaten run had left AK on the tails of Burnage, Birkenhead Park and Northwich in North One West, but following the early conclusion to the campaign, Kersal had to settle for a third-placed finish.

Whilst their industry on the pitch led to a very strong end to the term, their tireless work has very much continued off the field after the club launched the AK Community Kitchen.

This initiative was the brainchild of club chef Paul Taylor and since rugby was halted in this country, AK have spent the past two months cooking and delivering meals for members in their community.

With a body of volunteers including bar manager Neil Hitchen, U15’s coach Mark Povey and first team player Jack Gallimore, AK Community Kitchen was quick to spring into action to support those in need and currently, the club are producing around 500 meals a week.

nearly 600 meals produced for local self isolators & elderly in our community plus NHS. https://t.co/Ctv4Y5NPKq

“When we initially did it, we weren’t in the lockdown situation but rugby had come to an end and self-isolation was implemented,” says Taylor. “I had a couple of conversations with Tim [Marston] (club chairman), Neil and then with Mark about what we might do for the elderly members. We see them week to week on a Thursday evening, but we did think ‘Are they going to struggle?’ We wanted to try and do something to help members to start with and it has grown across the community since then.”

“It started out with just myself and Paul and we didn’t realise how much it was going to kick on to be honest!” adds Povey. “Initially, Paul was dealing with food orders and trying to get everything cooked and then he would stay at the club to deal with the pick-ups on a Tuesday and I was heading out and dealing with deliveries.”

Today, it is very much a well-oiled machine. In the kitchen, Taylor and Povey - social distancing of course - are focusing on food prep, with Hitchen co-ordinating the orders whilst Gallimore provides tremendous help wherever he is needed. Added to their work across the Altrincham area, the club have also been delivering hot meals to NHS front line workers at Wythenshawe Hospital for the last six weeks.

“At the time, staff weren’t able to have time to go to the canteen and buy something or they wouldn’t have a break at all, but now they can have something hot on-the-go,” says Taylor. “It makes us feel pretty special to be a part of.”

Every Friday, the club distribute 100 meals to Wythenshawe Hospital and initiatives within AK - such as the U10s taking up their own 2.6 challenge - allows Taylor and his team to continue delivering meals to NHS staff as well as vulnerable members in the community. Generous contributions have seen the club upgrade their cooker whilst Kersal also received two brand new fridges from local businesses to help deal with the amount of food they are producing.

All of this has allowed the AK Community Kitchen to provide ‘high quality, local, fresh and hearty food’ and whilst nourishment is obviously key to their work, there is also a conscious effort to make that connection with people.

“From our point of view, one of the key things for us is that you have got people who are self-isolating and haven’t spoken to individuals in days,” says Hitchen. “That interaction is vitally important. You’re spending a few minutes having that general chit-chat and from a club point of view, it’s about getting our name out there and showing that we’re a caring organisation. We’re a rugby club at the end of the day, but we do care about everyone in our community.”

The ‘humbling’ support which the club has received on social media highlights the positive work of the AK Community Kitchen. With media manager Kerry Cardy instrumental in spreading the message, various organisations across Manchester, including Sale Sharks, have been quick to praise the club from Timperley.

But Kersal’s initiative has also gone way beyond the North-West. Concerned family members from Scotland down to Southampton have also contacted the club to place orders for their loved ones who live in the Altrincham area. “You start out doing something because you think it is a good thing to be cracking on with and it organically grows into what it is now,” adds Povey. “It has been an amazing response.”

Whilst lockdown restrictions have eased this week in England, there is no let-up for the AK Community Kitchen. The club will, as always, release their menu across their social media channels on a Friday afternoon and people have until Sunday evening to contact Paul if they would like to place an order.

Here’s a reminder of this weeks menu, get your orders in by 6pm ???? pic.twitter.com/f1Bar3uo9w

From a financial point of view, the Covid-19 pandemic has hit rugby hard and teams at all levels will be affected by the large decrease in revenue which the sport provides, but despite the difficult times which clubs are enduring, Altrincham Kersal are showing anything is possible when community is at the top of the agenda.

“It is an absolutely amazing thing the guys have done,” says Marston. “It just goes to show the strength of AK. It is a proper community rugby club and an old school club. The efforts from the guys have just been brilliant. It has just shown, for us, what a community club AK is.”

Grassroots rugby in Scotland one year on: “We just can’t wait to be back on the pitch again”

Charlie Beckett Column: Be kind, look out for each other, and let’s get through this together