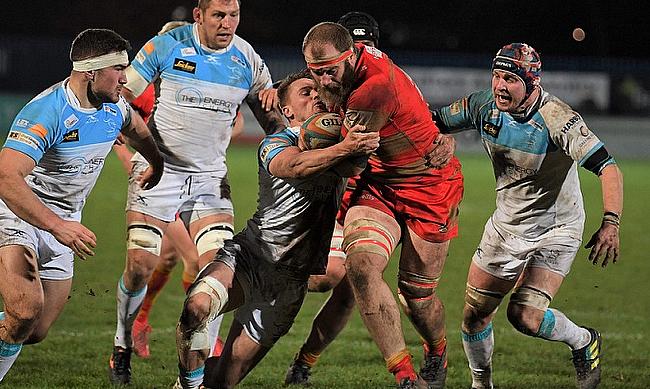 George Oram helped to re-establish Coventry as a Championship side. Joining in the midst of their run to the National One title, the second-row moved to the Butts Park Arena from fellow third division outfit Birmingham Moseley.

Starting his senior career with Blackheath, Oram’s talents were recognised quickly by Rotherham where he got his first taste of the Championship. Dropping down to National One for a season, the lock then played a major part in Coventry’s title-winning campaign before going on to help the side maintain their tier two status.

Now, Oram finds himself without a club as the financial burdens of Covid-19 meant Coventry felt like they had little option but to cut the second row from their plans. A club extremely dependent on a strong matchday gate, Oram says that he has no hard feelings towards the side, having enjoyed the best part of three seasons there.

“It is by far the worst time (to be out of contract),” Oram said. “There is a lot of players like myself. I had another year left on my deal with Coventry and that obviously got terminated and, you know, I am completely understanding of it. The season got cancelled, there was no way of postponing it. Those seven, eight games that were left, that revenue was just lost and overnight, clubs have had to go into a survival phase.

“So, there is no real ill will towards Coventry there, because I understand that they are just trying to survive at the moment on their bones without actually knowing when they are going to get going again. As an out of contract player, you struggle because it is very difficult to know when you are going to get going because teams are so uncertain about what their budget is going to be.

Obviously, this isn’t the way I would have wanted my time at Coventry to end. Although these are somewhat strange circumstances, I’m so thankful for my three seasons at the club. I’m incredibly proud to have achieved promotion in my first season and Supporters Player of the Season in my second. The fans, coaches and everyone involved in the club have been fantastic throughout and I’ve had the pleasure of playing with some unbelievable blokes. Some of the most fun I’ve had playing rugby has been in a Cov shirt and I’ve enjoyed every minute.

“I think, ultimately, you have just got to do your best, to keep training and focus on yourself and hopefully something comes up at some point. The dam will break at some point and we get some information and clarity as things start to turn around.”

For the Championship, there is so much uncertainty. Not only have several clubs in the division become semi-professional due to funding cuts, there are no clear guidelines, at the point of writing, as to when the Championship will restart.

With Saracens completing their Premiership commitments, the other 11 Championship sides and promoted Newcastle Falcons are left in limbo. Whilst being classed as an elite level of competition, the second tier simply doesn't have the backing to be able to afford Covid-19 testing that Premiership sides are having every week.

It is noticeable that the sides who are remaining professional in the Championship are the ones that generally have the best matchday attendances. Coventry, Doncaster, Bedford, Jersey, Ealing and Cornish Pirates are the teams who will be maintaining their professional status, with Oram believing that the competition needs investment in order to make for a stronger product.

“In terms of sustainability, it needs more support really and I think the double blow of the funding cuts and then the Covid hit is just massive,” Oram said. “Teams are going to have to survive and tread water for this season and maybe even the next couple of seasons out of the back of it. This talk about sustainability, ultimately, I think it needs investment.

“If you start making a better product because of investment, if you have 12 teams that are fully professional in the second tier of rugby, then you would hope that interest grows and rugby fans come back to their local club instead of their local Premiership club. The better the product, you can grow sustainability out of the back of that.”

More recently, Northampton have announced a partnership with the Bedford Blues, meaning that Saints youngsters will be playing regular rugby in the competition. It is also one of the primary reasons that Bedford are able to remain as a professional side.

Hartpury, Nottingham, Ampthill, Richmond and London Scottish will all be calling themselves semi-professional next year and for many, this is in some ways restrictive and will not be beneficial long-term for English rugby, with this severely reducing the professional player pool.

“I do sometimes question that if we are the biggest rugby playing country on earth, I do not think it is inconceivable that we have 24 professional teams,” Oram said. “The top half of that second tier, maybe it is propped up by some Premiership youngsters. Financially, it would have to be propped up for some time, but how we can make that attractive to people with investment and get people through the doors.

“I just feel like the Championship is a great competition and contrary to what the RFU says, a lot of Premiership and international players have come through the league. To see it potentially die over the next three, four years in terms of professionalism, that is going to be sad.”