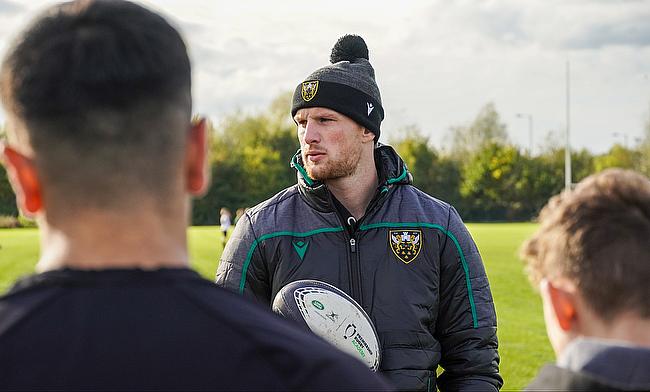 Rory Hutchinson, who has as auntie in the NHS, was full of praise for the health service during the coronavirus pandemic
©Northampton Saints

Alongside chatting to his teammates on the phone and playing numerous hours of PlayStation, Rory Hutchinson took to social media on Friday morning to show his appreciation for the NHS.

“I tweeted my support because you have got to give all the wonderful NHS workers and all the volunteers all the credit because of the job they are doing,” says the Scotland international. “We will support them all the way and hopefully we can all get through this together.”

At the time of writing, the latest figures from the public health authorities show over 19,500 confirmed cases of coronavirus in the UK with a senior Government adviser warning ‘a normal way of living’ could be six months away.

For now, and seemingly for the near future, the NHS frontline will continue their outstanding work to slow the spread of the pandemic. “I know someone who works within the NHS so you realise how big of a job it is,” says Hutchinson. “My Auntie works for them and she has been working so hard and is doing a brilliant job.”

The impact of Covid-19 is increasing in seriousness, but just over a month ago, the current scale of the virus seemed unthinkable in Europe - something which Hutchinson echoes.

At the end of February, the centre was in Italy earning his fifth Scotland cap as Gregor Townsend’s men defeated the Azzurri in the Six Nations, but that moment in Rome now seems like a million miles away.

“I can’t really believe what has happened since then, to be honest,” says Hutchinson. “I think no-one expected to be where we are today.

“Three or four weeks ago, we were out in the sun playing Italy away so it just shows how scary this virus is. It’s turned quickly so hopefully we can stop this as soon as possible if everyone stays at home and stays safe.”

Following the guidelines from the Government and the club, Hutchinson is doing all he can to keep himself healthy. The 24-year-old admits he hasn’t picked up a rugby ball for just over two weeks, with his last game for the Saints being a 16-10 win over Worcester Warriors at the beginning of the month.

“I’ve been trying to keep fit,” Hutchinson says. “I live with Alex Moon so we borrowed some of the gym kit from the club which we have set up in the garage and we have been working out every other day. We have been doing a few runs and gone out on the bike so we are just trying to keep fit because we don’t know when the season is going to come back.

“I don’t think you can sit back and relax because it will be hard to get back out there when everything is back to normal! We are eating well and, in a way, it has actually been good for myself as I have learnt to meal prep! I normally just go to the shop every day and grab whatever is on the shelves! It has been a learning curve for buying food in the week. We’re doing OK up to this point!”

And whilst Hutchinson and Moon are stocking their fridge with “shepherd’s pies and prawn curries”, they are also making the conscious effort to stay in regular contact with their teammates.

Mental health awareness is increasingly being highlighted in the media, with rugby falling under that umbrella, and Hutchinson realises the importance of chatting to his fellow Saints during this unprecedented time.

“I have been on the phone with the likes of Piers Francis, Cobus [Reinach], [George] Furbank, Alex Mitchell to see how they are all getting on and playing Call of Duty to just pass the days, but importantly, we are all keeping in touch,” Hutchinson adds.

“We have taken a three-week break from the club. It is about staying a home, but mentally, it is important to also go outside and do some exercise if you can. You just have to be sensible about it. When you see people having barbeques in parks, it isn’t a holiday. Everyone is being vigilant for a reason!

“For us, we have been sent programmes and running sessions to try and keep us ticking over so we are trying to do that to the best of our ability.

“Apart from that, as a team, we haven’t really been able to see each other, but we have been keeping in touch and we’ve played a lot of online gaming. The PlayStation has taken quite a beating! We are keeping in conversations and we keep communicating so it is all good. It is important we all still work as a team on the PlayStation so it has been good fun!”

Hutchinson and his teammates are also playing the waiting game in terms of when the current Gallagher Premiership campaign might resume after the RFU confirmed the end of the 2019/20 season at all levels other than the top flight of English rugby.

The RFU has confirmed the end of the 2019/20 season for all league, cup and county rugby in England with the exception of the Gallagher Premiership, which the RFU is in active discussions with.

Please read the full statement below.

But whilst Hutchinson could still have the chance of achieving success on the field with Northampton this year, he understands the worries and the disappointment expressed by some of the clubs further down the pyramid having experienced the lower levels of rugby himself with Moseley, Rotherham Titans, Coventry and most notably, Bedford Blues.

“First off, the news wasn’t great to see really because if you speak to the young boys or lads, past and present, a lot of them have played in the Championship,” Hutchinson says.

“I was at Bedford for quite a while and at Coventry for a bit as well so it will be a real shame if things start to change there because it is a great league. I really enjoyed my time at Bedford because they are a great club and I would hate to see financial reasons stop them from being a great club. Hopefully things get sorted because the league played quite a big factor in my rugby career.”

Hutchinson admits he’d love to see the Premiership season return at some stage with Northampton in the top four and a European quarter-final against Exeter Chiefs still in the schedule, but he was keen to lower the importance of rugby at this moment of time.

“It is never nice for the season to be put on pause when we’re doing quite well,” he adds.

“It’s tough because you put all that hard work in at the beginning of the season to then not really know the outcome. Hopefully things get back on track because we all want to play, but health comes first. Rugby is just a game and looking after ourselves is the number one priority.”