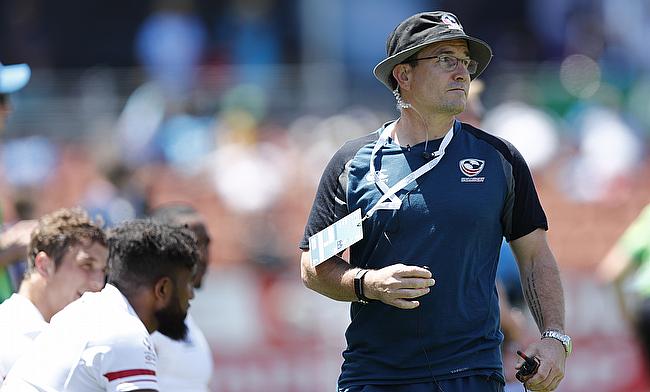 TRU Quarantine-Cast 5: USA Rugby Special
Blaine Scully: We have a lot of things we need to work on
USA Rugby files for bankruptcy due to financial constraints

Seven weekends ago we were in the midst of the Vancouver Sevens. Now, seven weekends later, the events in British Columbia seem a distant memory, now with only questionable livestreams of Belarussian second division football to pass the time, it felt like a good time to look at the biggest show that rugby has to offer.

Speaking on the latest Talking Rugby Union Podcast, Mike Friday spoke about how he is managing the USA Sevens side from afar, USA Rugby’s recent bankruptcy and how he thinks this period could be used to redevelop the sevens series in order to make it more sustainable for the future.

It was at the tail end of March when USA Rugby announced that they were filing Chapter 11 of US bankruptcy law. After several years of financial mismanagement, the governing body had overspent once more and the lack of income during the global pandemic simply meant that they had to start again.

“There is a lot of uncertainty, it has been unnerving,” Friday said, “We have managed to protect and ringfence the players on the residency squad through the process, less so the rest of us. It is what it is and it is unfortunate as an NGB (National Governing Body) that we are having to go through this process, but look, some of our issues are well documented.

Chapter 11 means that the bankruptcy court will allow USA Rugby to restructure their debts and obligations. It is the same process that major US companies General Motors and United Airlines went through and now continue to operate successfully.

We’re kicking off a week with plenty of @USARugby content with a podcast.

“The reality is that we as an organisation, we were already prior to this, working on a restructuring around how we operate as an NGB to then allow the high performance teams to maximise their performances, but also create a proper strategy to allow the community game and the grassroots game to grow.” Friday said.

“Rugby still has a fantastic opportunity to grow in America if it sits alongside and compliments the existing super-sports. But we have got to be fit for purpose and that requires change at all levels. At board level, at congress level, the community level, right down to the mums and dads and the kids when they first pick up the ball.”

Taking up the role as the man at the helm of the USA’s Men’s Sevens team in 2014, Friday jokes that his time spent back home in Bromley for the duration of the global lockdown we are experiencing is the longest he has been home for the last five or six years.

Regularly in contact with his players and coaching staff, Friday was one of many to breathe a sigh of relief when it was announced that the Olympic Games would be postponed until next year. With so much in sevens geared to reaching the pinnacle event that sport has to offer, Friday says that he can now start planning for next season, with some serious conversations to be had.

“There were a number of players who were finishing in 2020 who have now got to make decisions,” Friday explained, “There was probably a number of coaches that would have maybe looked at other things or were maybe looking into other things post-2020. I think there is a reassessment of goals for everybody, a refocus, a reset which will probably mean we are able to hit things, whenever preseason starts for us; fresh, energised, focussed and understanding about how we are going to work to Tokyo 2021.”

It is still even up for grabs which team will take the final place in Tokyo. After regional tournaments that have taken place since last summer, the likes of Jamaica, Hong Kong, Samoa, France and Ireland looked set to be fighting it out for the last remaining rooms in the Olympic Village.

Now, Ireland, Samoa and France are facing a 14 leg World Series starting this Autumn, then a repechage tournament before a hotly contested Olympic Games in the Japanese capital. As a result, Hong Kong, who have much lighter calendars in comparison, would be licking their lips at the prospect of taking on permanent World Series teams.

“Has COVID-19 presented an opportunity for us to look at the Sevens World Series with a fresh set of eyes?” Friday said, “A blank bit of paper and look at, actually what we want the World Series to look like over the next four to ten years.

“This is the melting pot that all the stakeholders, be it the broadcasters, be it World Rugby, be it the coaches or the players, be it the commercial partners, be it player welfare, need to consider. We have seen some experimental formats on the World Series which clearly haven’t worked. We have seen the collaboration of the men’s and women combined, whether or not that has worked from a broadcast perspective, how has the in-tournament experience been for everybody?”

Describing the removal of the quarterfinal stages as having “effected the DNA of the competition”, Friday believes that one option that could be explored by the Series is the commercialisation of each side like Team Sky or even Formula 1 teams in order to allow for private investment to come into each team and drive standards more independently from their unions.

With the recent addition of the Challenger Series, it is even feasible that there could be a second division, allowing teams to develop against one another before potentially having a crack at the established World Series sides and tier 1 nations.

“The one thing that the World Series does create is: it does give every country in the world the opportunity to compete at the highest level and work and aspire to be the best team in the world,” Friday said, “I think we can’t lose that essence, that DNA. We need to create the highs and lows that sevens competition allows, as well as the best possible product for the inhouse attendees.

“We have to ensure that the players and the people delivering the product are fully engaged and feel that the authenticity of competition and the game is being upheld. There is lots to consider, but there is lots of opportunity there. If we can get the right people and the different stakeholders in a room to try and drive what is a fantastic product.”

You can listen to this interview in full on the Talking Rugby Union Podcast.