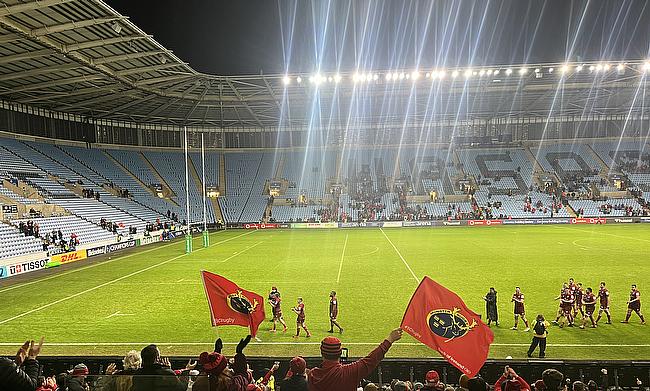 For both Munster and Wasps, the leadup to their Champions Cup opener was far from ordinary.

Each had Covid to blame for much of this, the majority of Munster’s squad that returned from South Africa still isolating, whilst Wasps were forced to make a number of changes on the morning of the game as a result of positive results and numerous close contacts.

This meant that Lee Blackett’s side lost fly-half Jacob Umaga and the starting lock combination of Elliott Stooke and Sebastian de Chaves.

This late shift saw Jimmy Gopperth move into the fly-half jersey, Michael le Bourgois to inside centre, Josh Bassett to outside centre and the introduction of Luke Mehson to the backline. In the pack, Brad Shields moved to lock alongside Tim Cardall, Nizaam Carr getting a starting slot and Alfie Barbeary moving to No. 8.

Michael van Vuuren was drafted onto the bench, Oghre shifted to cover the back-row, whilst Kieran Curran, Tommy Mathews and Cameron Anderson were added to the matchday squad.

Munster took the early lead, Wasps straying offside in the game’s early stages, allowing Joey Carbery an early opportunity to get the kicking tee out.

Things would go from bad to worse for the home team soon after, with Brad Shields controversially shown a red card by Romain Poite for a high tackle.

Carbery failed to kick the penalty that resulted from Shields’ dismissal, but made no mistake with the next opportunity that presnted itself.

As the half wore on, each side showed a little more in open play, with Munster stalwarts Peter O’Mahony, Keith Earls and Tadhg Beirne involved in a move that came to nothing.

That same move provided the spark for Alfie Barbeary’s score beneath the sticks, the newly converted No. 8 stretching his legs to give his team a brief lead.

It was brief only because of further penalties given away by John Mitchell’s defence, a hopeful nudge through from Conor Murray landing at the feet of Keith Earls, who duly dotted down.

Going into the second half, Wasps would be down to 13 men with Dan Frost send to the sinbin for an infringement at the ruck. It was that period which proved to be conducive to Munster’s win, Patrick Campbell and Andrew Conway both crossing the whitewash.

Even when up to 14, Wasps were unable to prevent Scott Buckley scoring from poor set-piece ball, the game in little doubt as the 55th minute came about.

Already losing, the home side’s fortunes continued to get worse, with both Nizaam Carr and Gabriel Oghre forced to leave the field with injury either side of Michael le Bourgois’ try.

Carbery kicked another penalty for his side before having to leave the turf with a dislocated shoulder. No more drama would come in Coventry, with the coaches left with the unenviable challenge of unpacking the game, as well as its leadup in their post-match interviews.

Lee Blackett was stood on the touchline, the echoes of Munster song filling the West Midlands air.

“It has been a difficult 48 hours I would say,” he said. “I must admit, this time yesterday I couldn’t see this game going ahead.

“You find yourselves with eight positives, what I find is eight go to four, to two and you finally weed it out. To come back with guys that get positive and then they get negative tests coming back – it was one of them.

“I am pleased it doesn’t look as serious at the moment in the squad, but it was definitely challenging.”

Having had such a significant amount of positive test results coming back, Blackett went on to say that it was only in the late hours of last night that he and his team were given the go-ahead for the fixture to take place.

“When you start getting everyone through and you are starting to come through as negative, it was positive news,” he said.

“Late last night, you would imagine boys going through the afternoon probably not thinking the game is not on either. We were having Zooms yesterday, we didn’t train. The team that actually took to the field today, didn’t train yesterday.

“You have got a second-row partnership that have never been together in a game (Shields and Tim Cardall), Brad Shields having to learn to call a lineout, potentially for the first time if anything happened to Timmy.”

Munster’s Covid-19 challenge brewed a lot longer than Wasps had. Coming back from South Africa following the Omicron outbreak, numerous members of the squad are still isolating or are recovering from the virus.

Ian Costello, the province’s Academy Manager, was the man charged with plotting the downfall of his former employers. Using numerous members of his Academy team to buoy a side missing key performers, Costello was more than pleased with how his team fared.

“The last two weeks were special,” he said. “We put ourselves in such a good position with our preparation. We made an early decision to use our pathway. It was extraordinary. It was as special as I can remember.”

Your Heineken Star of the Match - Scott Buckley ??

On his first European start, the academy hooker stepped up to the challenge to help @Munsterrugby beat @WaspsRugby!

It was a majority-Munster crowd that had made its way to the edge of Coventry, thousands donning red shirts, hats and scarves. The next generation of Munster regulars certainly left an impression, with hooker Scott Buckley awarded the Player of the Match award, whilst Eoin O’Connor and Patrick Campbell also impressed.

“Looking at the supporters here, the emotional attachment with this team is incredible,” Munster legend and BT Sport commentator, Donncha O’Callaghan, said after the game.

“They’re never found wanting. I think they saw something special within this new breed of young fellas and the lovely mix of the internationals looking after them.

“Guys like Peter O’Mahony have been immense, but it’s the younger players coming through that people are excited about. Of course, this game will be remembered for the red card, and I do think that really did affect it, but Munster should be so proud of their performance. This is up there with one of the greatest Munster days. It really is.”