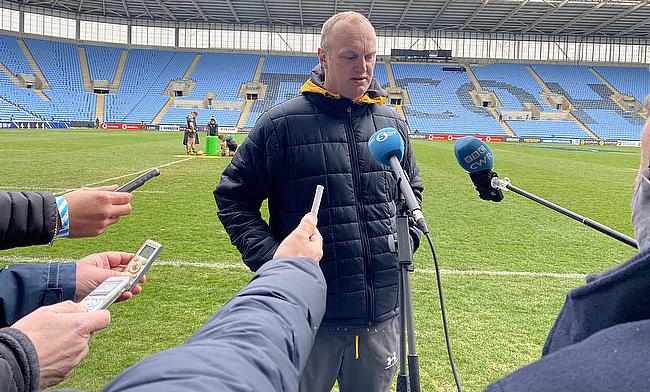 Lee Blackett takes his side to Sandy Park on Saturday
©TRU

Lingering in seventh place and scratching around for form, Wasps are looking to kickstart an emotional late-season revival away at champions Exeter Chiefs this weekend.

Lee Blackett’s side have been stuck in a self-confessed rut and have struggled to turn recent fixtures in their favour having lost six of their last seven in all competitions.

Top four aspirations may now be a stretch too far for Wasps, who are currently 14 points adrift of the play-off positions with seven rounds to go, but Blackett is keeping an open mind for the end of season push and is certainly not ruling out a spectacular finish to the campaign.

“People said we wouldn’t make top four sat 10th in the league last year,” Blackett said. "You talk about a game and start talking about a result. For us, we don’t talk about that. We talk about what is going to get us the win.

?? We can confirm that Defence Coach @IanCostello1 will be leaving the club at the end of the current season, to re-join @Munsterrugby...

?? A massive thank you for all your effort Cos. Good luck with the next chapter... #OnceAWasp

Despite a hunger to succeed between now and the end of the season, Blackett has placed a special focus on the emotional element of the current campaign, particularly for the Wasps players and staff.

With outgoings including hooker Tommy Taylor, lock Will Rowlands and defence coach Ian Costello - who will be returning to Munster ahead of the 2021/22 Pro14 season - Blackett believes it’s time to turn the unfortunate form around and give his departing players and staff an exciting send-off.

“It’s about making memories in these last seven games and giving it everything so we send people off on a high. Our emotion is we have got seven games left - three to four training sessions a week - to give absolutely everything in every session and game. Let’s make sure that those people that are leaving the club that we care a lot about, we send them off on a high.”

The past two weeks may have been a challenge in itself for Wasps as they came after a deeply disappointing Champions Cup defeat against Clermont Auvergne.

Failing to get over the line in tight games has been a theme for Blackett’s side of late, but the Wasps Head Coach has highlighted the positives in his team’s performances despite the negative results.

He said: “The result against Clermont I wasn’t happy with obviously, but I think with the performance I was.

“You spend a load of time looking at tiny little things you can fix and, before that Clermont game, we spoke about going back to basics and doing what we know works well. For us, we’ve been disappointed with our set-piece.

"I feel like recently we have just fallen off a little bit and we’ve fallen below our standards in terms of our set-piece. We chose a team against Clermont to give us that, and they came up trumps and put us in a position to win it.

“Our unstructured attack was getting to what we know it can be. I think those are the two areas when we’re looking at strengths that got us to a final and put us in positive positions and when we’re playing at our best, those two areas are going really well for us. I feel we’ve slightly fallen off it and we’re definitely putting our focus on that at the moment.

“For me, there were more positive signs. It was a gutting way to lose, but I can go away feeling better knowing that we put in a better performance. The things we spoke about during the week and the things we wanted to focus on were massive and there were improvements in that.”

Saturday’s opponents, Exeter, tasted European disappointment of their own in their Champions Cup quarter-final last the weekend, which saw the current holders knocked out by Leinster.

Despite the Chiefs coming unstuck in Europe, Blackett is under no illusions as to the strength of Rob Baxter’s squad and he knows all too well the importance of a win for both teams at this stage.

He said: “For years now, it’s always been one of those games that you look out for. There have been some great games over the years and they’re tough. Exeter have found a way to get over the line without being at their best, but I've started to see over the last couple of weeks that there have been massive improvements in them.

“Obviously, they’ll be looking for a massive push to the end of the season and they’ll use this game to try and get them back on track from last weekend.”

England scrum-half Dan Robson has been a massive boost for Wasps after returning from the Six Nations last month. The England international will be one to watch against Exeter, and Blackett believes the running number nine could be the difference.

He said: “You can see how effective he is for us when he’s not here. He’s brilliant around the place and he’s a really good leader and a ball of energy. When you talk about running 9s and you want to get your 9s out running, that’s the way the game is going. You need 9s that are out and running. He’s right up there with the very best in the Premiership and he’s proven it.

Gutted today. Boys gave everything, so proud of the effort. We will learn and be better for it. Thanks for all your support ?? pic.twitter.com/D47ZpHKi4k

“It’s really good to see him on the international stage. I'd love to see him start a few more games internationally. I think he deserves it. For us, it’s about getting his x-factor into our game and getting him running as much as we possibly can as a nine because the more he runs, the more successful we’ll be.”

Although fully focused on the remainder of the season, Robson has one eye on international success and will be hoping to earn a place in England’s plans for this summer.

According to Robson, the isolated experience of living in bubbles during the Six Nations has not dampened his appetite to compete internationally, and he believes that a strong finish to the season for his club side could put him in good stead to be considered for a call-up.

“For me, it’s just about getting chances. Personally, I'd love to get a start or a couple of starts to show what I can do from the beginning of a game. It’s always in the back of your mind a little bit, but at the minute my full focus is with Wasps and to try and get us into a decent position come the end of the season. I’ve always said it, but if you’re playing well for your club, it brings things off the back of that."