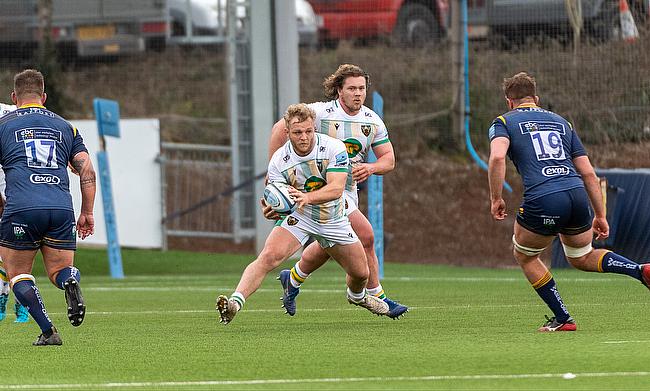 Mike Haywood has played over 200 games in the colours of Northampton Saints
©Claire Jones / redhatphoto.com

If Mike Haywood thought reaching finals and collecting silverware was all part and parcel of representing Northampton Saints, no one would have questioned him.

After just three seasons as a senior professional at Franklin's Gardens, the hooker lifted both the Premiership title and the Challenge Cup as the Midlands outfit began to create waves domestically and on the continent.

It has been seven years since Alex Waller’s dramatic extra-time try won the Saints their first-ever Premiership crown, and their historic victory over Saracens at Twickenham came a week after they had clinched the first part of their league and European cup double against Bath.

“When I first started in the first team, we used to win quite regularly,” Haywood reflects. “We’d be in the top four all the time and you’d never bat an eyelid about Saints not getting there. You then have a couple of tough seasons where we went something like three years without getting past fifth place so it just goes to show all the work you have to put in to keep you in that top four.”

Since 2013/14, the success has dried up for the Saints. Just one top four finish in the last five seasons - as well as a Premiership Rugby Cup triumph - have been added to the history books, but Northampton’s form since Boxing Day has put them in a position to challenge for the big prize again this term.

Memories of that epic encounter? pic.twitter.com/mTgAapARD3

One of the factors which has enabled the club to turn their fortunes around is the exuberant youth that Chris Boyd has unleashed during this campaign. Ollie Sleightholme and Tommy Freeman have been electric in recent weeks - scoring 10 tries between them this season - and their ‘edge of your seat displays’ have been backed up by fellow Academy graduates like Alex Mitchell, George Furbank and Ehren Painter.

“I do think the promotion of youth is really positive for us,” Haywood tells TRU. “Instead of having to bring people in, the club look to the players who they want to grow in the Academy. All those lads that actually come through the system do put in so much hard work. There is a lot of dedication and sometimes they can fall at the final hurdle if a club brings in someone from overseas so it is awesome to see that and Northampton really pride themselves on bringing players through the Academy.

“The young guys have all had the opportunity to play this season and they continue to take it. They have put in some great performances and it is always nice as a front-rower to see the wingers running in and scoring tries off our scrums!

“I came through the ranks myself and it is strange looking back at it now in terms of what I have actually done throughout my career. These guys are at the start of their journeys and it is awesome to be a part of that and hopefully we can get back to winning things at Saints just to put those winners medals in their cupboards as well.”

Following a far from ideal start to this season which saw the Saints lose their first five games - to add to the seven defeats they suffered during the conclusion of the 2019/20 campaign - Northampton still have the wind in their sails despite being knocked out of the Challenge Cup by Ulster last week.

Europe aside, Boyd's men have collected six victories from their last nine matches and as well as continuing to implement their free-flowing, high tempo style of play, the Saints have found different ways to win during this good run of form.

“You look back before Christmas, and I think we’d gone 13 games without winning a single one [including their forfeited match against Gloucester due to Covid related reasons] so it just shows it can change overnight. All it takes is one win for you to get back on the horse and get momentum going again. That is pretty much what has happened for us. We are up to fifth, but it is just making sure that when we are playing at our best, we are also reacting to teams whether that is in defence or attack to get the win.”

That approach of adapting to different scenarios might well be applicable on Friday night when the Saints host London Irish.

Like Northampton, the Exiles exited the Challenge Cup last weekend at the quarter-final stage and the visitors will now arrive in the Midlands with a similar goal in mind of finishing in the top four.

Declan Kidney’s men are just one point behind the Saints, and Irish have caught the eye this season with their expansive style of play.

The deadly trio of Tom Parton, Ollie Hassell-Collins and Ben Loader will all start at Franklin’s Garden and whilst Haywood recognises their immense talents, the 29-year-old realises Northampton cannot afford to focus solely on the Exiles’ flyers.

“One thing for us is that they have got a quick back three who are dangerous,” Haywood says. “For us, we have got to make sure that we get good kick pressure, we put them in the right spots and as we are defending, we make sure we are chasing and connected.

“I think they have got a lot of great players all over the pitch and they can do something out of the blue so for us, we just have to make sure we are switched on in ‘D’ and when we get the ball, we take our opportunities and we don’t force anything because I think they like an open style game.

“It is going to be a tough game. They are a great side at the moment and can play in different ways. We have got a lot of big games coming up and we can’t really afford to lose any if we want to make top four. I think that is the motivation we’ve got is that we have to think like every game is our last game. If we end up losing this one, it is not our season done, but it is going to make things tougher to get into the top four with the games we have got coming up.”

Northampton, of course, would move into the play-off positions with a victory on Friday as they kick off Round 16 in the Gallagher Premiership and for Haywood, he hopes the campaign can end in success for an exciting Saints side - just like he experienced seven years ago.

“I think every season we go into it aiming for silverware,” says Haywood, who will make his 231st appearance for the club this weekend. “For me, the biggest thing is I want the younger lads to experience that winning feeling at Northampton.

"Winning the Premiership Rugby Cup a couple of seasons ago, I think the likes of Hutch [Rory Hutchinson], Furbs [George Furbank] and all the boys that played in the Wandies [Northampton’s Academy side] got an opportunity to play and got the feeling of what it is like to win stuff.

“Now it is for us and them to move on to the bigger stuff and hopefully one day before I finish my playing career, we get to lift the big prizes again.”