Scotland bounce back with 32-26 win over France 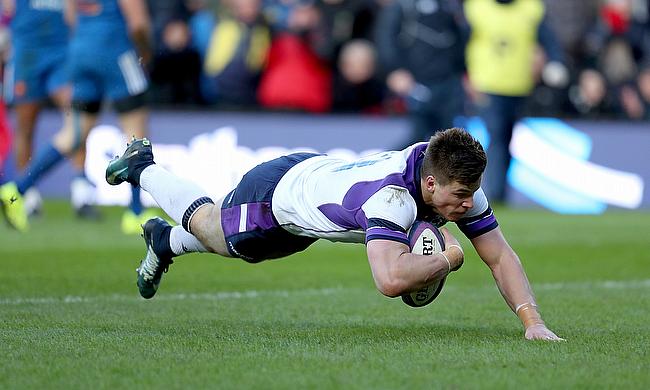 Greig Laidlaw kicked six second-half penalties including four in the final quarter as Scotland bounced back from defeat in the opening round with a 32-26 triumph over France in their Six Nations encounter at BT Murrayfield Stadium on Sunday.

The win has taken Scotland to the fourth position in the table while France are positioned fifth after losing both their games.

Teddy Thomas gave a promising start to France as he went past Finn Russell and Stuart Hogg to score a second minute try while Maxime Machenaud slotted a conversion and a penalty to put the visitors into a 10 point lead.

Hamish Watson and Jonny Gray led Scotland's response as they fed Sean Maitland as they crossed over in the 12th minute and Laidlaw's conversion brought the gap down to three points but brilliance from Thomas sprinted down the wing in the 26th minute try to restore the 10-point lead for the visitors.

Unwilling to relent, Scotland once again bounced back when Huw Jones crossed over in the 31st minute that was improved by Laidlaw but Machenaud's second three pointer at the stroke of half time meant the visitors headed into the break with a 14-20 lead.

Both teams suffered from discipline issues in the second half as Laidlaw and replacement Baptiste Serin exchanged penalties to kick-off the proceedings. The duo once again traded penalties as France maintained 20-26 lead at the end of the third quarter.

However, Jacques Brunel's men could not withdstand the pressure in the final quarter as they continued to make errors allowing Laidlaw to kick for more penalties to help Scotland comeback from behind to complete a six point victory.