Ruaridh McConnochie: 'I had a mate sending me the article and I was like 'Oh really?!' 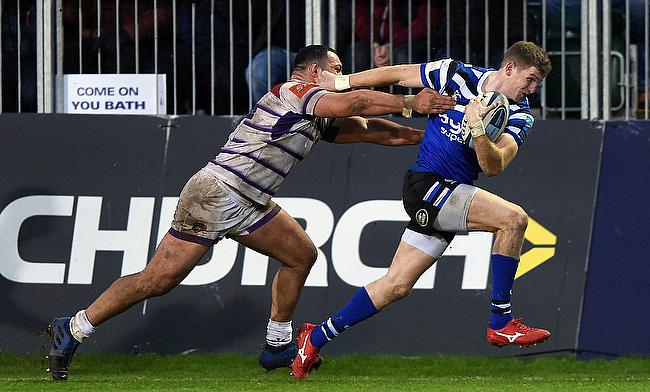 Following the respective squad announcements by England and the Barbarians earlier this week, there was a usual name which featured in the headlines.

The exclusion of Danny Cipriani, ahead of Sunday’s match at Twickenham, was one of the main talking points and rightly so, after the campaign the fly-half has had.

He has produced some dazzling performances and it has left supporters wondering whether there will be another shot for Cipriani on the international stage. The odds seem to be becoming slimmer for the Gloucester man, but the Premiership Player of the Year is not the only one in the West Country who has caused quite a stir this term.

Whilst Cipriani has been in the spotlight during his debut season at Kingsholm, Ruaridh McConnochie has also made an impressive impact at Bath. The rise of the former Great Britain and England Sevens star has accelerated since he made the transition to the XV-a-side game last summer and having not been selected for the Barbarians game, talk of an inclusion in Eddie Jones’ provisional Word Cup party is heightening.

Reports this week have suggested McConnochie - who has featured at full-back and on the wing for Bath this season - will be part of Jones’ plans as the build up to Japan continues, but when the Olympic silver-medallist was sent a news article regarding his selection for England, it did take him by surprise.

“I had a mate sending me the article and I was like ‘Oh really?!!,’” McConnochie told TRU. “It was a school mate and he was like congrats and I was like for what?! You’d think we’d get told before the media!

“It is obviously nice and quite humbling to be mentioned in that stuff and you just have to wait and see, but I know it is just from a media point of view. There's not been any contact with him [Eddie] yet! It would be a bonus considering I was only thinking about playing a few games for Bath this year!”

In total, McConnochie racked up 15 appearances for Bath and the 27-year-old has moulded himself into a versatile player at the Rec in his first year at this level.

As the weeks passed by during the 2018-19 season, he continued to make his move into the Premiership look seamless. Last October, McConnochie was handed his first start in English rugby’s top division against Harlequins and having grasped the opportunity following injuries to the likes of Aled Brew, Anthony Watson and Joe Cokanasiga, he has maintained his progression to such an extent a place on the plane to Japan is not beyond the realms of possibility.

“I have absolutely loved my first year. It has definitely exceeded my expectations and it has definitely been tough! I guess I was a bit naïve in terms of the level of information and detail which goes into it with things like running lines and high-ball catching.

“It was all about coming in to try and learn the game as much as possible and any game time would sort of be a bonus for me.

“I always said to myself, if I did get the chance, I wanted to make the most of it and have no regrets. It was important for me that in every Premiership Shield or Cup game that I was involved in in the early months, that I really tried to learn as much as I could. When I finally got my Premiership start, I was over the moon, but also excited to try and make my mark to try and make the team better.”

First season with @bathrugby and loved every minute of it! Thanks to everyone who’s made it such a special first year ?????? pic.twitter.com/8eYemt93Hu

“It was alright!” laughs McConnochie when asked about the awards. “Again, they were something I was not expecting at all. I always thought to myself it was going to be tough. Not many people have made a really big transition from the Sevens and been mainstays. If it didn’t work out, I would have been happy that I tried, but if I didn’t try, I would have had regrets in a few years’ time.

“The coaches and the players are the ones you are doing it for and you’re with them day in, day out. That’s the main thing and they have been really helpful all the way through this year.”

If it hasn’t been teammates, coaches or pundits in the XV-a-side game applauding McConnochie’s achievements this season, praise has also come from where he made his name; Rugby Sevens.

In an interview with TRU last week, England Sevens’ Phil Burgess was full of admiration for his former colleague - who played for three years on the HSBC World Sevens Series circuit - and McConnochie is appreciative of the support he receives.

“It’s awesome and I still keep in touch with a lot of them,” he says. “I actually caught up with Burg last week as well! That’s one thing I’d say I miss the most about the Sevens and that is the group of lads. Although, I say I miss them and miss watching them play, I don’t really miss how knackered they seem at half-time!

“Seriously, they were always really good with me when I said at the beginning of last season that my goal was to get a Premiership contract and they were like ‘why not, you have got to make the most of everything.’ They were so supportive and have been through this year as well. I always get nice messages off them after or before games.”

Sevens will always be close to McConnochie’s heart. This was evident in an interview the Commonwealth Games medallist did with The Telegraph last month where he was baffled by proposed RFU cuts to the sport, citing how beneficial the Sevens pathway is for players.

https://t.co/NfcjMEl7js @ruaridhmcc is hoping for a final swansong in San Francisco as England aim for glory in the Golden City. #RWC7S pic.twitter.com/IFSVXtO9vK

In our interview, he also spoke incredibly highly of James Rodwell, who will retire from playing at the end of this Sevens cycle, describing him as a ‘role model’ who had a massive influence on McConnochie’s rugby journey.

McConnochie played alongside side Rodwell at the Olympic Games in Rio in 2016 and also at the Rugby World Cup Sevens in San Francisco last year, but now his main focus is fully on the XV-a-side game as Bath look to kick on.

The club managed to clinch Champions Cup qualification on the final day of the Gallagher Premiership season following a dramatic win over Leicester Tigers and with Stuart Hooper stepping up as Director of Rugby to replace Blackadder, who will be coaching in Japan, McConnochie is excited to crack on with his second campaign at the Rec.

“The game against Leicester, we felt we could have been much better in it but it was great we could graft it out at a place like Welford Road”, he says. “To get that Championship Cup spot, that is where we want to be playing.

“It is obviously sad to see Toddy and that group of coaches go, but obviously at the same time, it is super exciting having Hoops come in. He will have his vision on where he wants the club to go and I think he is a massively passionate guy about the club.

“For me, I still feel like I can get better and there is so much more for me to learn. I still think I’m pretty raw in the XVs game. I am just looking forward to learning more off the likes of Joe [Cokanasiga], Anthony [Watson], Roko [Semesa Rokoduguni] who have all been in that England set-up and Aled Brew who has been part of Wales squads so there is so much experience and knowledge in the back three department.

“It is exciting for us and when we are all fit, I think it is just going to make us better as a team. I am looking forward to next season to see how it goes!”

Things have gone very well for Ruardih McConnochie this season and if England isn’t to be the next step in his impressive journey, don’t be surprised to see him continue on his upward trajectory in the XVs game.