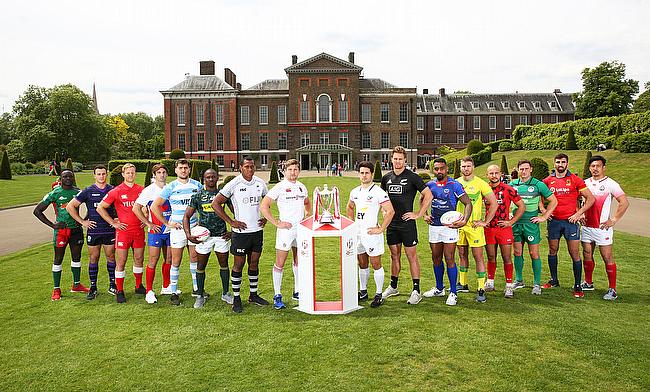 Phil Burgess admits this season has been a learning curve for England ahead of this weekend’s London 7s at Twickenham.

Simon Amor’s side secured bronze medals in all three of those aforementioned tournaments and with the penultimate leg of the series taking place on home turf, Burgess is keen for England to show what they are capable of.

“Our season has been up and down this year and we haven’t been potentially as successful as we wanted to be,” Burgess told TRU during the captains’ media day at Kensington Palace.

“We have had a few injuries and bits and pieces here and there, but that’s just sport. It has been a learning curve which has been good because, like anything, you develop through the year and we are going to hit the end of the season as hard as we can.

Looking forward to it? pic.twitter.com/dziyQ6ePoh

“It is massive for us to go out and put in a good performance. We want to go out at Twickenham and make the fans proud and make ourselves proud.”

One player in England’s squad who will be looking to put in a positive display this weekend will be James Rodwell.

At the beginning of the month, Rodwell announced he will retire from the game at the end of this season after 11 years representing England and Burgess, who will compete in his 50th tournament this weekend, was full of praise for his teammate.

“For the English game, he [Rodwell] has been massive,” Burgess said. “He has been playing for a long time and has played 91 tournaments, I think! He has been a stalwart and that is the best way to describe him.

“The level of detail he shows on and off the field is amazing. Also, the way he has looked after his body to be able to play that many tournaments is incredible. I think anyone watching the game and wants to know how to do it, they need to speak to him!

“The main thing really for us is to try and squeeze him dry of all that information and knowledge he has picked up. It will only leave the programme in a better place. If he goes into a coaching role fully, I think it would be massively beneficial for our programme because he has got so much to give.”

England Sevens record holder @James_Rodwell announces his retirement at the end of the season ????

Whilst Rodwell is coming to the conclusion of his marvellous Sevens career, the likes of Jamie Barden, Tom Emery, Ben Harris and Charlton Kerr are set to make their London debuts this weekend.

The next cycle of players available to England seems to be encouraging and university rugby is also providing a talented pool of athletes for Amor and his coaching staff to select from.

Former Northumbria student Will Muir was awarded England Men’s Sevens Player of the Year for this season and with Burgess having graduated from Loughborough University before making his first steps into the game, he is more than aware of how important university rugby is

He added: “I was very fortunate to go to university and be offered a professional contract when I finished. My main reason for going to university was to play some high-quality rugby as well as getting my degree.

“I was very fortunate that we had a very good side and there are now a lot of top universities competing. I think it is testament to some of the players who I wouldn’t say get forgotten about, but some who mature and develop their skills later. I think university is a great pathway for people to go through and I think Sevens is showing that.”

Burgess was also quick to highlight the development of one of his former teammates on the circuit, Ruardih McConnochie, who moved into the XV-a-side game at the start of this season.

????|| WOW! What do we say when previous @NorthumbriaMRU & @NUstudents alumni @Willmuir5 is scooping @EnglandRugby #RPAAwards19 Men’s Sevens Player of the Year 1?? year after graduating!

“He [Ruardih] has excelled since going to Bath,” Burgess said. “I think he is a prime example of someone who wasn’t ‘rated’ when he was younger.

“He went to New Zealand, came back and went to the University of Gloucestershire. From there, he came into the programme and showed what he was about. He grew in our programme, not as a player because he developed massively, but as a person. He is now tearing it up at Bath and I am incredibly proud.”

Burgess will captain England’s current crop of players at Twickenham this weekend as the home nation look to build on their success from Singapore last time out.

England have been drawn in a pool alongside Ireland, Scotland and New Zealand and as things stand, they are 14 points behind fourth-placed South Africa.

Burgess is hoping his side can continue battling for a top four finish as they aim to secure automatic qualification for the 2020 Olympic Games in Tokyo.

“Building through the season, we have been one minute or one try away from winning a lot of games so it was nice to get to a podium again in Singapore.” he said.

“Coming into this weekend, England in England is awesome. Putting on an England jersey at Twickenham as a rugby player, I don’t think you can really beat that so we are just going to leave everything out there and see what happens.”