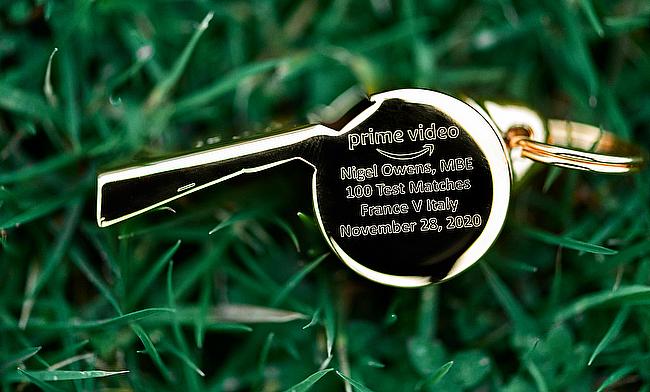 To celebrate legendary referee, Nigel Owens MBE, becoming the first in his field to reach 100 International Rugby Union Test matches, Amazon Prime Video has gifted Prime membership free for one year to all households in his hometown of Mynyddcerrig, located in Carmathenshire, so they can watch his landmark achievement this weekend.

Owens is set to reach his 100th International cap when he officiates France v Italy in the Autumn Nations Cup at 8:10pm on Saturday 28th November, broadcast exclusively on Prime Video.

On track to make history, Owens is regarded as one of the finest referees in rugby and has had a distinguished career from his start as an international referee back in 2005, to officiating in four World Cup tournaments, including the 2015 World Cup Final between New Zealand and Australia.

He is well known for his firm but fair approach, with his pithy in-game quotes such as, “Don’t swear, now, you’re on telly” and, “You don’t like to scrummage? Well if you don’t, you’re in the wrong position,” delighting fans around the world.

As well as ensuring that all 117 households in Nigel’s birthplace are able to watch the big game on Saturday, Amazon Prime Video also presented Owens with a bespoke golden whistle to commemorate his historic achievement.

Referee @Nigelrefowens is one of the most famous faces in world rugby.

But after excelling in one field, he's been chatting to @hannahthomasitv about his plans to take up the challenges of another ?? ??

The keepsake is inscribed with the date, match details and the ‘100 Test Matches’ accolade, and was received by the referee in his secure Autumn Nations Cup bubble as he prepares for the big match.

“Nigel Owens is a true living legend in Mynyddcerrig. He was a local lad with big dreams and worked extremely hard to reach the pinnacle of his profession, including refereeing the final of the Rugby World Cup,” said Ann Davies, County Councillor, Llanddarog Ward for Mynyddcerrig.

“We are proud of everything he has achieved and the whole village will be tuned in to Prime Video to watch his next milestone on Saturday. I wouldn’t be surprised if the whole of Wales was watching too!”

Coverage of France v Italy starts at 7.30pm, Saturday 28th November (KO 8:10pm) on Amazon Prime Video. This match follows a huge clash between Wales v England at the Parc y Scarlets stadium in the Autumn Nations Cup, which kicks off at 4pm. Prime members in the UK will be able to watch all remaining Autumn Nation Cup fixtures free with their Prime membership; new members can sign up for just £7.99 a month.

For a list of all compatible devices visit amazon.co.uk/watchanywhere.