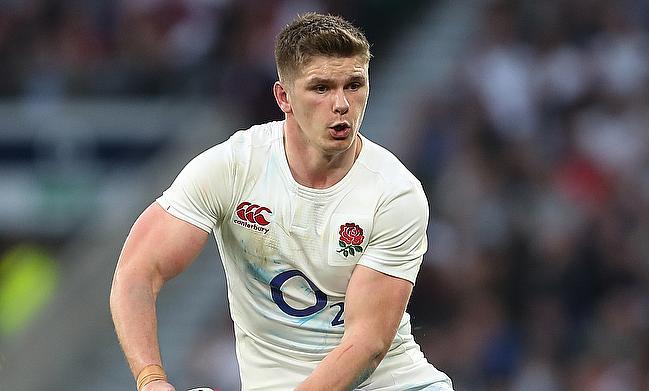 For the past two weekends, Owen Farrell has presided over two dominant Saracens victories.

Beating Bath 17-71 in Somerset and then Wasps 56-15 at the StoneX Stadium, the 30-year-old will now turn his attentions back to international rugby.

Not playing for his country since the Six Nations earlier this year, he instead spent his summer in South Africa with the British and Irish Lions, coming off the bench in two of the three Tests against the Springboks in a series loss.

Not joined by his Saracens teammates Mako and Billy Vunipola or long-time friend George Ford in the England squad, there is a strong feeling that this is the start of a new era.

Eddie Jones has emphasised the need to refresh his squad with five campaigns between now and the 2023 Rugby World Cup in France. This process began in the Summer where the Australian capped the likes of Marcus Smith, Harry Randall and Adam Radwan during the summer.

It is, of course, Marcus Smith that has created the most headlines out of those three, the 22-year-old fly-half guiding Harlequins to a Premiership title, then joining Warren Gatland’s Lions in the southern hemisphere after winning caps against the USA and Canada at Twickenham.

With George Ford dropped from the squad, Smith is seen as the successor to the Leicester Tigers man, with Farrell impressed by what he has seen from the youngster.

“He is obviously a massive talent and a very exciting player,” Farrell said. “We have worked together before, he has been into camp before when he was a bit younger, we shared a room together and things like that in the past and it was good to know him a bit better in the summer.

Eddie Jones’ team heading off to Jersey this morning for a training camp. pic.twitter.com/HhFkLKKtMC

Much like Farrell, Smith was thrust into the limelight at a young age and it feels as though the time is now for the Harlequins star. The pair are very much at the opposite ends of the spectrum, with Farrell approaching the 100-cap mark and Smith making his first steps into the Test match arena.

For Farrell it has been a year of immense difficulty, playing his domestic rugby in the Championship, with Eddie Jones cataloguing his captain’s struggles in September, citing the Saracens man having had Covid-19 before the Six Nations, playing in the Championship and a lack of high-quality rugby.

“I agree, I could have played better,” Farrell said when quizzed about his form this year. “There is parts of my game I want to get back to and do more of.

"But I came back this summer and couldn’t wait to get back playing for the club, couldn’t wait to enjoy being back out on the field again and that’s where I am at and I am excited not to see what is in front of us with this England team now.”

Since his last involvement with England, there have been plenty of changes. Naturally the players are constantly evolving, but it is the coaching group that has changed most. Richard Cockerill, Anthony Seibold and Martin Gleeson have joined Jones’ staff in West London, after Simon Amor, John Mitchell and Ed Robinson all moved on.

With that in mind, Farrell is hopeful that improvements can be made by England as this new group develops.

“Hopefully we’ll bring something a bit different,” Farrell said. “We have got new coaches, we have obviously got new coaches and we want to evolve. I don’t think the games turn out exactly the way that everybody wants them to, including ourselves, but what we will be doing is pushing to make sure that we get better.

It was 12 months ago that Farrell and his teammates picked up an Autumn Nations Cup title playing a kicking style of rugby that got plenty groaning. Playing a similar style in the Six Nations, England faltered in that tournament, whilst the rugby played in the Lions series was also less than perfect.

What was a saviour in this time was the no holds barred manner in which the Premiership was played. Epitomised by Harlequins’ Premiership win, since the competition has returned it has been much of the same. Just looking at the last two games that Saracens have played, it is clear that tries haven’t been hard to come by.

Despite that, Farrell isn’t quick to say that the Autumn Nations Series will follow the same path.

“We will see that what the weather is like first,” he said. “The Premiership normally starts off pretty fast and it normally ends up fast. You had that finish to the Premiership last year, which was high scoring as well, but the big thing for us as a team is; we want to make sure we evolve.

“We want to be aggressive in the way that we play, but we have got to make sure we play in any way which the game presents. Whether that be the weather, the interpretation of the laws or just how the game is going at particular times.”