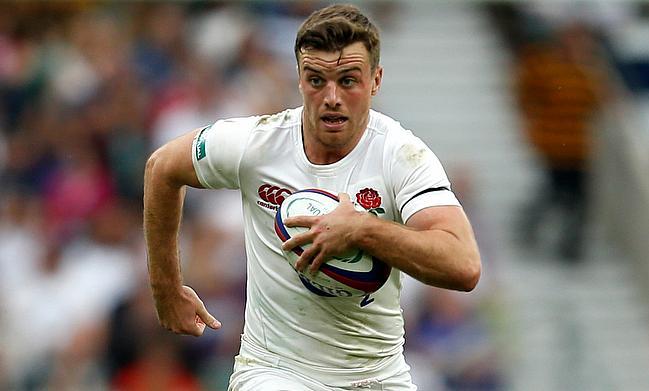 For England’s last two games, George Ford has had to watch from the stands.

A regular under Eddie Jones and most commonly seen in the 10 shirt, with captain Owen Farrell playing outside him, the Leicester man has missed the recent games against Italy and Georgia because of an Achilles injury,

However, the fly-half is back in contention to face Ireland this weekend and Ford has been heavily involved in the last three meetings between the two nations, games in which England have bettered their opponents. Beating the Irish in two consecutive Six Nations clashes and in a World Cup warm-up game, Ford started in two of those games and came off the bench in the other.

It was the win in the 2019 Six Nations that had lips smacking. An aggressive kicking game from England led to a 32-20 win in Dublin and that style of play has become notorious with Eddie Jones' side, as seen at the World Cup in Japan. It was used to smother the All Blacks in the semi-final and Ford was the architect of it all. His pinpoint accuracy placed his teammates in the optimal positions to score as they made their way to the final in Yokohama.

“It’s funny, the kicking game obviously gets spoken about quite a lot,” Ford said. “It is actually the intent to run first with ball in hand that opens kicking space up. For us, we need to get momentum, we need to get speed of ball, we need to have options across the field to get the ball to space at the right time, to manipulate the backfield and that is pretty much the order it goes really.

“It is not a case of; right, let’s go try and find space in the backfield from the very off. There is a bit of a process to actually doing it. We need to make sure that our detail in attack, plus our intent, that our breakdown is probably better than ever before, because obviously Ireland are very good at the breakdown as well.”

25 players are in camp to prepare for this weekend's match against Ireland at Twickenham.

Ireland come into the game at Twickenham having made four changes to the side that dispatched Wales with relative ease. Keith Earls starts on the wing, with Jacob Stockdale dropping onto the bench and Andrew Conway leaves the squad entirely.

Bundee Aki replaces the injured Robbie Henshaw in the midfield, James Ryan will captain the side due to Jonny Sexton's absence through injury and that means Ross Byrne will make just his second start for Ireland at fly-half.

The Leinster man's only other start came against England in the summer of 2019, a game Ireland would lose 57-15. Having performed admirably for his province all year, the young playmaker floundered in the cauldron that is Twickenham and was unceremoniously replaced by Connacht’s Jack Carty in the 54th minute.

Having come up against Sexton on numerous occasions, Ford believes that Andy Farrell’s Ireland won’t change their style of play too much with their young fly-half directing play.

“Obviously a lot of things go through the 10, but probably more so with someone like Johnny Sexton, who is obviously the player he is," Ford said. "Having watched Billy Burns and Ross Byrne it is pretty much the same things.

“It is not every time the ball is going to where the 10 is, but probably more often than not, that might be the case. I think Ireland have probably developed and mixed their variety up a bit more, attack wise, in terms of going down the short side's and playing a little bit more, trying to get to the edges and stuff like that. It is something we are going to have to be aware of defensively.”

Ford could be winning his 70th cap on Saturday, if named in the matchday 23 by Jones, but there is a plethora of young and emerging talent just taking their first steps into international rugby.

One such player is Bristol Bears loanee, Max Malins and it has been quite the 15 months for the Saracen. His season started with a broken bone in his foot before his club were then subjected to an enforced relegation for salary cap infringements. He broke his foot again in March before lockdown, but bounced back to win the Challenge Cup with Bristol.

It was his consistent performances with Pat Lam’s West Country outfit that would see the 23-year-old parachuted into the England squad. Able to play virtually anywhere in the backs, Malins is blessed with pace and creativity and his effort of overcoming every piece of adversity faced by him this past year was rewarded with his international debut against Georgia in West London.

“It has probably been one of my most challenging seasons actually,” Malins said on Wednesday. “Along with all that stuff going on with Sarries, I obviously had injuries as well. I fractured my fifth metatarsal in pre-season, which was gutting at the time because I felt that my opportunity to sort of stake my claim playing for Sarries early on while Owen [Farrell] was away on international duty was taken away.

“Then obviously I came back, played a few games, thought I played quite well and then obviously it struck again and was out for another three, four months so there has been things going on, on the field and off the field.

England play Ireland at Twickenham on Saturday, the game kicking off at 15:00 GMT.