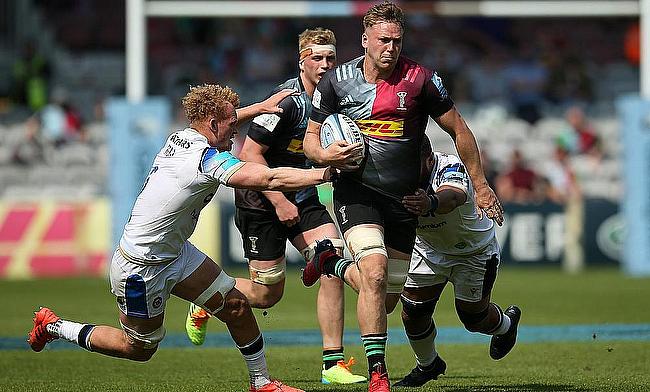 Alex Dombrandt and Sam Simmonds add a new flavour to the No.8 position after Billy Vunipola's omission
©Getty images for Harlequins. By Steve Bardens

In the 2019 World Cup cycle, as Japan started to come into view, Eddie Jones’ vision for England began to become more apparent.

The omissions of Dylan Hartley, Chris Robshaw, James Haskell, Danny Care, and Mike Brown were the first sign of Jones shaping a squad that went on to reach the final against South Africa.

The England boss is now mapping out his route to Paris as Jones looks to take his side one step further in France in two years time. After ‘drawing a line in the sand’ following the British and Irish Lions tour this summer, once again, there are a cluster of experienced players who have been left at shore.

For now, George Ford, Billy Vunipola, Mako Vunipola and Jamie George - who have a combined total of over 250 caps between them - are not in Jones’ immediate thoughts. They were all absent from last month’s short training camp, but the England head coach did not rule out a return for the quartet during the autumn as his side prepare to take on Tonga, Australia and South Africa.

Their elite mentality has been on display in the opening weeks of the Premiership season with Ford instrumental in Leicester Tigers’ resurgence whilst the Saracens trio could not have done much more in their recent 71-17 thumping of Bath to prove why they should be part of England's plans.

Mark McCall said that he would be “amazed” if Jamie George, Billy Vunipola and Mako Vunipola were not restored to the England squad after all three played a starring role in Saracens’ 71-17 demolition of Bath | @AlexMLowe https://t.co/Lu9P3JsEED

However, Jones did suggest some of the players he has used in the past may not have the capability to once again challenge for the biggest prize in the sport.

“It’s more about the timing,” Jones said. “The World Cup cycle is four years but for England, once you get past the Lions, you are basically two years away from the World Cup.

“You have five campaigns. From that time, you can start looking at your World Cup squad because you’ve got a pretty good picture of those players.

“We now have a number of players who’ve been through two World Cup campaigns. One of the things I’m looking at is those players who’ve already been to two World Cups, whether they’ve got the will to prepare to win. That’s the main thing in terms of getting our squad right for the World Cup, because we need a balance between experience and youth coming through.”

On the axing of Ford, the Vunipolas and George, Jones continued: “At the moment I feel they need to regenerate and rejuvenate. They need to add things to their game if they’re going to continue to the next World Cup.

“They understand that and we’ll see how they progress over the next period of time. The door is not closed to them, it’s always open. If they can tidy up their games in certain areas and come back with the right desire, the opportunities are going to be there for them.

“They have been great players, they have been loyal and done well for you. But the job of the head coach is to make judgement and the judgement is that we need to move onto a World Cup selection process now.”

From a Saracens point of view, having the Vunipola duo and George available to them could be a blessing in disguise as they look to challenge for the Premiership title whilst Ford can continue guiding Leicester in the right direction during the autumn.

Bringing it back to England, for a while, the wider view has been to add in different components in the form of youth and enthusiasm whilst transitioning away from the old guard who have served Jones so loyally. After a fifth-place finish in the Six Nations, the England head coach feels he can no longer afford to lean on all of his trusted lieutenants with the World Cup creeping up on us.

With many of his regulars away on Lions duty, the summer was always going to give Jones a chance to blood some youngsters, but frankly, so many of the next generation were becoming harder to ignore.

Marcus Smith was front and centre of that discussion and the fervour around the Harlequins fly-half continues to grow: “That’s the test of a young player coming through,” Jones said of Smith. “We wouldn’t have selected Marcus if we didn’t think he could handle that [international stage]. We think he can.

Comparing the number 10 position to that of a bus driver, Jones added: “He’s got to create a route for the team, a place for the team to go and then be able to get the team to play to that beat.”

Elsewhere, whilst Bristol Bears are going through a difficult spell, scrum-half Harry Randall has been a bright spark and fellow No.9 Raffi Quirke (Sale Sharks) seems to be in the same, exciting mould which Jones has opted to go for.

Adam Radwan (Newcastle) and Max Malins (Saracens) fall under the same bracket whilst the dynamism of Alex Dombrandt and Sam Simmonds will be a tasty battle as both fight for the No.8 shirt.

The impressive form of Premiership leaders Leicester hasn’t gone unnoticed when it comes to Freddie Steward, George Martin and the rise of Nic Dolly. The Tigers hooker, who has scored five tries this term, is one of four uncapped players in the squad alongside Quirke, Northampton’s Tommy Freeman and Mark Atkinson (Gloucester).

With all the disappointment from last week, you can see what this means to @SaleSharksRugby ??

Next week, England will head to Jersey for a five-day training camp to shake off any international rustiness ahead of their Autumn Nations Series opener with Tonga, but Jones will hope the exuberance of youth mixed in with the experienced players - such as captain Owen Farrell - will be the recipe for his side to hit the ground running.

They may need to be on the money from the word go - given the Wallabies and the Springboks have been together for a few months already - but after the predictable nature of Jones’ selections in recent times, it is all change at Twickenham. How will the new England fare?