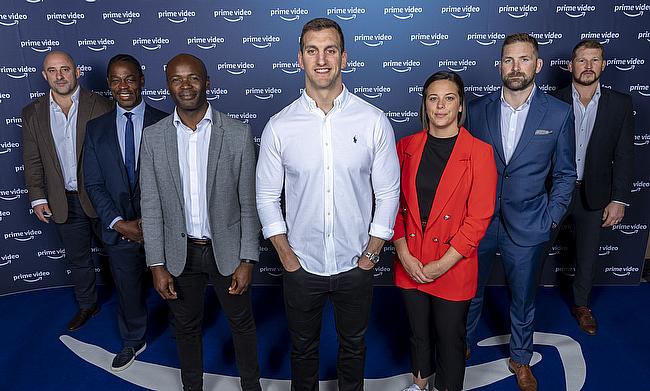 There’s never a dull day at the moment in rugby union. No matter the day, there’s a new drama and a new topic to debate about on social media.

Just a couple of weeks ago, a Club World Cup was brought to the fore again, with the outgoing chairman of the EPCR, Simon Halliday, confirming that talks were advancing surrounding the topic.

There has also been the suggestion of having another tournament, the World 12s, but in the midst of all of this, Talking Rugby Union and the media big wigs were invited to a glitzy event in central London to look ahead to a competition which is already in the rugby calendar; the Autumn Nations Series.

To start the day, I walked into an exhibition room in which Thierry Henry and Patrice Evra were talking to Gabby Logan on stage. Well, I’m in the wrong place. Apparently not, I’d just missed the rugby presentation laid on by Amazon Prime.

So, probably time to leave the room and get prepared for some interviews...oh there’s Wayne Rooney.

Anyway, a few hours later and we are crammed into this room with Alex Green, Managing Director of Amazon Prime Video Sport. This is the man charged with not only bringing us the Autumn Nations Series but the streaming platform's coverage of the Premier League, tennis and much more.

With all this talk of innovation, the topic doesn’t take long to come up. From the moment it was conceived, the Autumn Nations Series can be seen as nothing other than an innovation itself.

An evolution of the Autumn Nations Cup that was played out last year – which millions tuned in to watch according to Green – there does seem to be tremendous positives to having Amazon involved with Six Nations Rugby to deliver these fixtures.

Now, all of the matches played by the home nations, Ireland, France and Italy will be under a collective banner, with a blanket of competition across the board. Previously, these fixtures might not have pierced a consumer’s mindset and, maybe more importantly, Amazon investing heavily in order to broadcast these games.

“International rugby does breakthrough,” Green said. “Whether that is the Six Nations, the Autumns or the World Cup, I think that does breakthrough into the wider consciousness and that is part of the reason we love doing it.

“The rugby calendar has been evolving and will, I am sure, continue to evolve. I guess there is this window up to the next World Cup where everything is pretty locked and loaded, but I think creating a good international calendar that fits with the various club calendars makes sense.

“My personal view is that international rugby is a fabulous thing to offer, and I don’t so much think there is a lack of marketability, it is more structuring a year in a way that works for all. That is the next step really.”

For all parties, it does seem like a winning formula. Perhaps the only drawback is the greater rugby world, who continue to be dragged and kicked into the 21st century.

One criticism of the game is that matches in October and November essentially lack meaning, however this attempt at creating a story and even greater competition is set to challenge that belief.

Starting on Saturday 30th October when Scotland take on Tonga at Murrayfield, it is set to be an exciting four weeks of rugby.

As Green said, one of the biggest problems in rugby is arranging something that works for everyone. In the past few months alone, a World Cup every two years has been hypothesised - along with the Club World Cup - and already we have seen the United Rugby Championship come to fruition.

Undoubtedly there is a changing tide in the professional game and keen to build from the initial successes of the Autumn Nations Cup is Green. The Amazon Prime MD is also hopeful that a competitive structure could even be created across an entire year.

“Something that Andrew Cotter said, which I totally agree with; when it comes to England against South Africa in one of these Tests, everyone is focused on that match, and it can be an amazing match and we all know that,” Green said.

“I wouldn’t say that the matches are meaningless, they are very meaningful at the time. I personally think there could be more to be done in creating that more competitive structure and not just around that tournament, but generally in international rugby.

“We had the Autumn Nations Cup, which was very much a one-off because of the nation’s competing and created a structure around that. It did build and I like that concept of building, so I would love to see that competitive structure through the year in international rugby if all the powers that be can make that happen.”

Like it does on so many occasions, it is all down to everyone being aligned. With each competition having its own interests, it is unlikely to be an easy process by any stretch of the imagination and it seems as though there are more questions than ever to be answered by World Rugby.

This is before we even bring the topics of head injuries or artificial pitches into the conversation. Whatever the case, a debate will rage on until some clarity can be found when it comes to deciding what direction the game will go in next. Will Prime Video play a major part in that? Only time will tell.