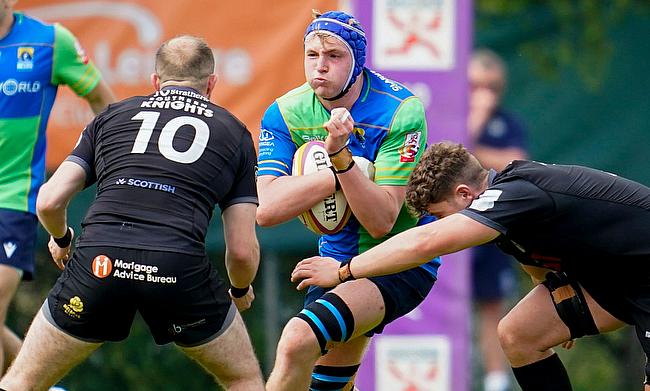 Thompson aims to seize 'great opportunity' on South American tour
New era for women and girls’ rugby in Scotland: 'People are enthused - now is the time to make this move'
Ben Muncaster has his feet firmly on the ground, but is ready to fly with Scotland
The inside story of how determined and diligent Darge made it to the big time

Last week, Liam McConnell should have been enjoying his final few days of school before graduating and heading out into the big, wide world.

Instead, he was missing his end of year prom at James Gillespie’s High School in Edinburgh as he was in Italy with his Scotland under-20 team mates.

And if your schooldays in general are a learning curve, then the last couple of weeks have certainly been that for McConnell on the rugby field, but the back-row player has handled things very well.

Having impressed many for his club side Boroughmuir at youth level, then the Scotland under-18s and then Boroughmuir Bears in the FOSROC Super6 Sprint Series during 2021/22, he was picked last month to travel to the summer event where the Scots are playing their Pool B matches in Treviso.

On June 25 - the day after his 18th birthday - he started at six and made his under-20 debut against Wales.

Scotland lost 45-15, but McConnell did not look out of place and he and fellow youngster Kerr Johnston, the Gala winger also on debut, were praised afterwards by head coach Kenny Murray for “being outstanding and showing passion that some of the older boys could learn from”.

He was then picked to start again in the Stadio Di Monigo versus Italy on June 30 - the day after the aforementioned school prom - and, again, although Scotland went down 34-14 he gained pass marks.

Not just at home in men's rugby, but thriving. Bashing senior players about, bossing collisions, the nuts and bolts of his game excellent.

On Wednesday, McConnell will start his third match on the spin against Georgia as Scotland aim to avoid finishing bottom of the pool.

“Around the Wales game it was a good couple of days" McConnell told TRU. "I didn’t really get to celebrate my birthday too much, but in the period leading up to the game I was just excited. We found out the team a good couple of days before so I knew going into it what was ahead.

"The toughest thing [stepping up to under-20 level] was just the size of some of the guys. There were a few boys in the Wales pack who were pretty big and it was quite a fast game as well. They played pretty quick when they got on top of us.

"I think playing in Super6 before this trip definitely helped. If I had gone from under-18s to this, I think I wouldn’t have been as well prepared.

“In Super6, I had two games off the bench and one start and I think those three games just gave me a chance to play against bigger and older guys and see how it is.

“I have been at Boroughmuir my whole rugby career so far. The school I went to have a kind of partnership with the club and if you wanted to play rugby and went to James Gillespie’s then you went to Boroughmuir – things just went from there.

“When I was younger I played second-row, but I think back-row is where I should be at this level and I just want to keep on learning.”

“Liam is a talented player”

Scotland under-20 head coach Kenny Murray has had plenty of issues on his plate of late, but certainly brining McConnell into the set-up in recent times has been one bright spark.

“Liam is a talented player. I watched a lot of club and Scotland under-18 games and he stood out and my mindset is get these younger guys in early and get them battle hardened to play under-20s rugby,” Murray said about McConnell who is set to join the Scottish Rugby Academy set-up soon, most likely via Edinburgh Rugby.

“If a player is good enough, they are old enoug. It doesn’t matter if they are 18, 19 or 20. I think Liam experiencing this level of rugby - the physicality, the intensity, the speed of the game - will benefit him. He now has potentially three years at this level so he is going to be an asset not just as a player, but as a leader over the next couple of years in the under-20s.

"He works hard and he and Kerr Johnston have both come up from the under-18s and they have set high standards for themselves. They put in the yards on the pitch and off it they are really diligent around their review process and they want to improve. They are great guys to have in the environment.”

Four changes for the big match

In the Georgia match, Scotland will be aiming to avoid an eighth defeat in a row at under-20 level in 2022 and a 13th on the spin in general.

Murray has brought in Christian Townsend at stand-off in place of Euan Cunningham while Keiran Clark is at full-back meaning Gabe Jones shifts to the wing and Ross McKnight misses out.

Your Scotland U20 team for tomorrow's game against Georgia has been confirmed.

Gregor Hiddleston rotates in for Patrick Harrison at hooker while Tim Brown replaces Ollie Leatherbarrow in a rejigged back-row with the Ayrshire Bulls man from Montrose wearing number seven.

“We have to put in a performance for the full 80 minutes,” Murray, whose charges have leaked 79 points in 160 minutes to date in the competition, said.

“For sure, we will have to be competitive from start to finish to get the win against Georgia. We as coaches hope that the squad can put in the performance that we know they are capable of.”

Scotland versus Georgia under-20 takes place in the Summer Series in Treviso, Italy, at 4pm UK time today and will be streamed live on the Scottish Rugby website.