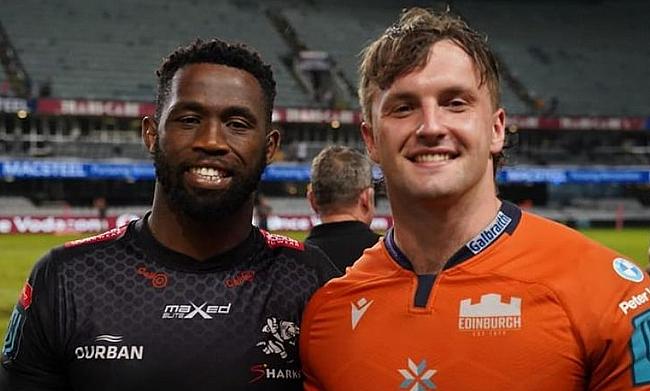 Grant Gilchrist to captain Scotland in summer tour of Chile and Argentina
“There was a recipe for success in September”: Scotland need to show patience to secure a repeat win over Ireland
Three good 40 minutes from Scotland so far - now they need an 80 minute performance to triumph in Italy
Muncaster back in Scotland and learning from the best

At the start of the 2017/18 season, Ben Muncaster was playing under-16s rugby at school but fast forward less than five years and he is getting ready to head off on Scotland’s South American tour.

It has been a rapid rise for the now 20-year-old back-row, but just like he took the step up from under-16 to under-18 rugby in his stride, those that know him well expect the uncapped Edinburgh Rugby man to continue with that same mindset.

Muncaster, originally from North Berwick in East Lothian, is a determined character and he will tackle the upcoming challenges head on as not much seems to faze him.

Scotland will play an ‘A’ game against the full Chile squad in Santiago on June 25 before three full-blooded Test matches against Argentina on July 2, July 9 and July 16 in various locations across the country.

And, given the way Muncaster has played when given his chance by Edinburgh this term, you would not put it past the youngest player in the 40-man touring party to be given a run out at some point against Los Pumas.

Certainly Mike Bayly, the Director of Rugby at Rugby School where Muncaster was educated after moving south from Scotland, would not be surprised if his protégé makes his mark over the summer.

“When I arrived at the school [at the start of the 2017/18 season], Ben was in his third last year of studies and was playing under-16s rugby and straight away he stood out to me at that level,” well-respected South African coach Bayly told TRU.

“We [Mike and other coaches at the school] thought it would be better for his development if he was moved up to the under-18 age group.

“In the five years I have been at the school, we have moved a handful of the most promising under-16 players up a level, but in general they have played in cup fixtures while, in that first year moving up, Ben played in most of the regular season fixtures.

“That year he held his own there and more as one of the younger ones in the first XV group and it was clear that we had a pretty special player on our hands.

“Ben just developed from there and grew as a rugby player, being part of that first XV - and a big part of it - until he left the school in 2020.

“As well as being a magnificent player, he is also a great guy. He is humble, he has his feet firmly on the ground and he is really thankful for a lot of things in his life.

“We knew that he was destined for big things and would go on and play for Scotland one day, but this chance has come a bit sooner than we would have expected.”

Anyone who has watched Muncaster in the United Rugby Championship or Europe with Edinburgh of late can only have been impressed by the maturity he has shown for someone born in October 2001.

He is also very calm and calculated and that has all been building since he and Bayly began working together in 2017.

“He has great leadership skills and in his last year at school [2019/20] he was captain of the first XV and we had a very successful year - he led the team very, very well,” Bayly recounts.

“His work ethic that year and in the previous two years was exemplary and he led from the front. He puts in the hard yards and expects all of his teammates to do the same.

“We always used to talk about ‘if you get it right off the field, then you will get it right on the field’ and we want the boys who play rugby here to be good humans and contribute to other parts of school life away from school and Ben certainly did that.

“Throughout the period in the school team, he was playing No.8 and he was a powerful player, something he has built on over the last couple of years with Edinburgh.

“Since he left the school and moved back to Scotland, we have kept in touch a lot and I have been up on some work trips to Edinburgh and we have been able to connect there.

“When he was playing with Edinburgh in South Africa, I unfortunately could not get back home to watch him, but a highlight for him was when he played against Siya Kolisi and got a photo with him. It was really nice when he sent me that picture.

“He is a great young man and I am so pleased for him.”

Muncaster’s success has also created a buzz amongst the current Rugby School pupils and, over the summer holidays, the first XV squad will be heading off on a pre-season training camp to Tignes in France which is run by Sir Clive Woodward.

Dulwich College, Clifton College, Millfield School and Rugby School will be there as coaches try to unearth the next Ben Muncaster.

Muncaster, as mentioned, grew up in North Berwick near Edinburgh and began his rugby journey at the local club in the town before spending time at Loretto School in nearby Musselburgh.

He was then awarded a half rugby/half cricket scholarship to Rugby School and was part of the Leicester Tigers Academy until 2020 and has played for - and captained - Scotland at under-20 level.

In 2020/21, he was on an Academy contract with Edinburgh Rugby and also earned some Super6 experience with Watsonians.

And this season has seen him really breakthrough in the professional ranks with Edinburgh, being named young player of the season.

“He won young player of the season at Edinburgh at their awards this week and to go into Edinburgh as a 20-year-old and get a spot in that back-row shows he must have been training really well.

“He had the consistency of good performance after that. He played really well in the games out in South Africa against the Sharks and the Lions.

“Speed is his biggest asset, with carrying ball as a No.8 or in terms of kick-chase. He’s physically matured, his body shape now looks like he’s able to play club and Test rugby. We’re excited about seeing him in our environment.”