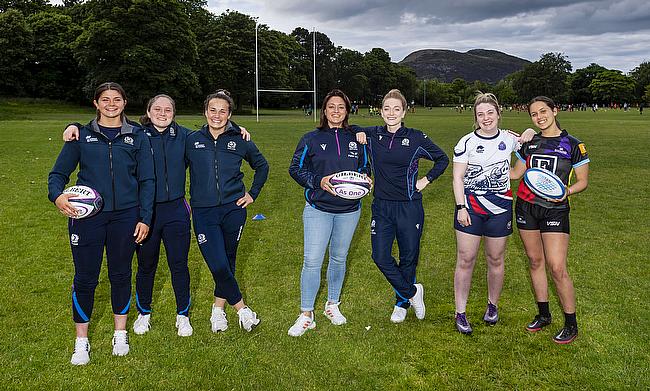 “There was a recipe for success in September”: Scotland need to show patience to secure a repeat win over Ireland
Three good 40 minutes from Scotland so far - now they need an 80 minute performance to triumph in Italy
Edinburgh University skipper Sarah Denholm and her squad out to emulate the 'Class of 2017'
The 24 hours which saw Scotland’s Women reach the Rugby World Cup

They say good things come to those who wait and there has been some waiting, but now a minimum of 30 female rugby players in Scotland are to be handed professional contracts following the Rugby World Cup later this year.

Scottish Rugby, the governing body, has committed a large sum of extra money to make it a reality and it should allow the national team to compete on a more even footing with other countries in big events such as the Six Nations and the WXV going forward.

On Thursday, Scottish Rugby’s head of women and girls’ strategy Gemma Fay - the former Scotland football goalkeeper - launched the ‘Women and Girls’ Strategy 2022-2026’ which aims to develop and grow the game at every level for females over the next four years.

The standout part of this investment will allow a minimum of 30 players to be contracted post-World Cup when it ends in November.

Delighted to be launching our 4 year strategy for Women& Girls’ Rugby! Exciting times ahead! #AsOne https://t.co/82YUYBRLma

Many of those who earn contracts will become full-time rugby players solely focused on sport and others will balance their rugby commitments alongside studies or work, but with more scope to rest and prepare for training and matches than they have ever had in the past.

On Tuesday, it was announced that currently 36 players are being supported with individual packages by Scottish Rugby to prepare for the World Cup in New Zealand which begins in October, but this latest news takes things up a level.

“This is an extremely exciting time to be involved in women and girls’ rugby and I feel privileged to have been able to work with a fantastic group of people, both within Scottish Rugby and within rugby in Scotland, who are equally excited by the opportunities we see in front of us,” Fay told TRU.

“We want to harness the current momentum we have seen post-pandemic in the women’s game and create long-lasting, transformational change, allowing women and girls’ rugby to define its own unique identity within the rugby landscape in Scotland.”

In terms of the amount of money the top Scottish players could earn post-World Cup, Fay said: “We’ve spoken to the players about this and we said to them within the next couple of months, before we go to the World Cup, we’ll discuss what that [the contracts and salaries] looks like.

“What we have done is a benchmarking exercise behind the scenes around about what other unions are looking to do or are doing and what UK Sport is doing in terms of what they pay [athletes]. I would say we’re competitive with that.”

So, what has been the situation up to now?

Well, Jade Konkel was Scotland’s first professional female player in 2016 and a small number of others followed.

In 2019, 10 players were listed as contracted via Scottish Rugby, but no other information was forthcoming until just before the Six Nations earlier this year when national XVs head coach Bryan Easson stated that circa 35 squad members “all have an individual package now that suits their lives”.

As stated, that support has been strengthened and is now being offered to 36 players - but the latest news about the contracts coming in will be a game changer.

Asked why now is the right time for Scottish Rugby to take its biggest ever leap in terms of professionalism in the women’s game, Fay explains: “Firstly, I think the English FA have done a lot for women’s sport in general. That has taken significant investment over a long period of time to get football to that point. When I was playing football, they had just launched central contracts for England [and things have built from there].

“Part of the hard work has been done by some sports who had the resources and the foresight. I think that has opened the door for more sports to do that [invest more money].

“Secondly, in an age of social media, movements can be started overnight, and the ones that really strike a chord with people in society stick and I think women’s sport, because of the quality of what we can see on TV, has stuck.

“The fact that governing bodies have opened up and said ‘there’s an entire 50 per cent of the population there that we know are good for our sport if they come in’.

“People are enthused about women’s sport and it’s different from the male game. We need to manage professionalisation carefully, but now is the time to make this move.”

As part of the new four-year strategy, the Scottish Rugby hierarchy are looking for the national team to earn a top four finish by the 2024 Six Nations, a top eight finish at the 2025 World Cup and want to see attendance at national team games increase to 7,000 by 2026.

Also, plans are in the offing to set-up two semi-professional women's sides.

The two clubs will compete in a semi-pro league with teams from other unions and various discussions are ongoing.

Of course, what is happening to the national squad and the potential semi-pro sides has grabbed the headlines, but the plans put in place by Fay and co should also have a far-reaching impact on all areas of the game in Scotland.

The focus of the strategy is around four Ps: Participation, Pathway, Pipeline and Performance. These key areas are underpinned by a holistic approach which is needed to develop the women and girls’ game across the board to create long-term growth and sustainability.

Scottish Rugby will invest in seven strategic priority areas – “our key building blocks” as Fay calls them - that will impact across the four Ps.

These are: ‘Empowering leadership’, ‘Positive introduction to rugby’, ‘Playing pathway for all’, ‘Building capacity in our clubs’, ‘Developing the future of performance rugby’, ‘A winning Scotland’ and ‘Let them see what they can be’.

On May 3 I wrote "the next 5 months + a week is a real chance for women’s rugby in Scotland to grow a bigger fan base than ever before"...

Welcome news has come a month + 13 days into that period - let's keep trying to build things up around @Scotlandteam pre-@rugbyworldcup ??

Scottish Rugby chief executive Mark Dodson said: “Scotland led the way in terms of women in leadership positions when Dee Bradbury became the first female president of a Tier One Nation in 2018.

“From the pioneers of Scotland’s first international game at Raeburn Place in 1993 and the Grand Slam win in 1998 to our current national team qualifying for the upcoming Rugby World Cup, Scotland women have, and continue to be, inspiring role models for the thousands of players in clubs across the country, promoting the positive opportunities the sport can provide for women and girls at all levels.

“We are fully committed to this important and comprehensive strategy. As a core pillar of our business strategy the breadth and depth of our ambition to grow the women and girls’ game is evident and I believe there are exciting times ahead for our sport in this area.”