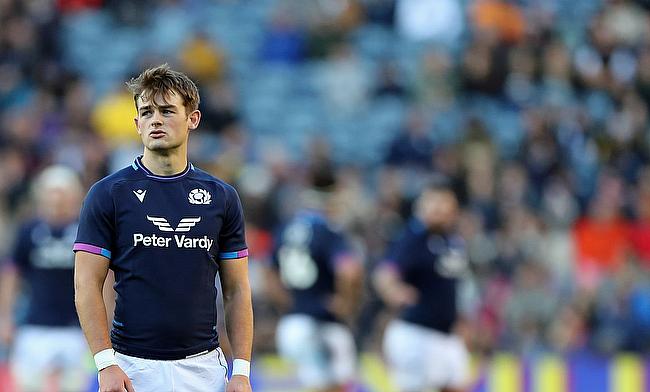 New era for women and girls’ rugby in Scotland: 'People are enthused - now is the time to make this move'
Ben Muncaster has his feet firmly on the ground, but is ready to fly with Scotland
Grant Gilchrist to captain Scotland in summer tour of Chile and Argentina
Scotland confirm fixtures for Autumn Nations Series

Ross Thompson may not have too much top-level rugby experience under his belt, but the 23-year-old knows that nothing can be taken for granted in any game and he and his teammates certainly will not be taking Chile lightly this coming weekend.

The match on Saturday in the Estadio Santa Laura Universidad SEK - home of the football club Union Espanola - in the Chilean capital Santiago, is not a full international.

Scotland will be sending out an ‘A’ team to take on the full Chile squad and given that the hosts have two big Rugby World Cup 2023 qualifiers to come versus the USA in July as well as the fact that the visitors will only be able to use players from Edinburgh and Glasgow Warriors in this one because it falls outside the international window, it certainly won't be just a ‘warm-up’ game.

After this weekend, Argentina awaits for three Test matches and opportunity knocks for one cap man Thompson and the seven uncapped players in the 39-man party, but only if they perform well in the first tour match.

“They have had a few games recently and are trying to qualify for the World Cup, so we do have some footage on Chile," Glasgow Warriors stand-off Thompson told TRU. "They are a good side so we will treat them with respect and have done some analysis on them.

“However, I think the focus is on ourselves and playing our own good rugby rather than putting too much focus on them. We want to start this tour with a good result heading into the three Argentina Tests. It is a great opportunity.

“We have a really good squad out here and everybody is excited to play some rugby as there hasn't been a summer tour for four years.

“It is a massive opportunity for a few of us on this trip. There are a lot of uncapped players and lots of players with just a few camps under their belts previously mixed in with those with a lot of experience.

“Any time you get a chance to play you want to prove you can stand up at this level and deal with the quality that comes in international rugby.

“I was lucky to be in the Autumn Test squad last year and earned my first cap against Tonga and then at the tail end of the Six Nations, I came into a few camps.

“Those experiences makes me want to play more - I want to try and play against Argentina.”

Thompson versus Kinghorn: the battle for number 10

You could forgive many professional rugby players if they were keen to reach for the sunbed rather than pull their boots back on this summer after a gruelling 2021/22 season.

Thompson, however, is pleased to be able to get right back on the horse after a frustrating end to the season with Glasgow, a URC quarter-final thumping by Leinster seeing head coach Danny Wilson lose his job.

During the last 12 months, the former Stewart’s Melville College pupil has managed to shake off Duncan Weir and Domingo Miotti to become the Warriors first choice 10.

Over the coming weeks - with Finn Russell and Adam Hastings not touring – he will be looking to beat Edinburgh Rugby’s Blair Kinghorn to the dark blue number 10 shirt.

“Blair is a great player and he has a really good natural ability to spot the gap and play into space,” Thompson said of his squadmate.

“His ability to beat defenders too is really good. I have had the chance to train beside a lot of the Glasgow boys for a while but coming into this environment it is nice to bounce off different players, players you haven't played as much.

Thanks to the Grange School in Santiago for hosting the team as preparations continue for Saturday's game ???? pic.twitter.com/By84RZ7KEY

“I have come into this trip off the back of an up and down season. Glasgow started the season quite well but didn't finish it as well as we would have liked to. It was the same for me personally. I didn't think I performed as well at the end of the season, so I am lucky to have the chance to make amends on this trip.

“Now I just have to train really well. With Adam and Finn not being here, it is more of an opportunity.

"All the coaches have been great with me. They come into Glasgow every so often and send me clips every three or four games and often I will try and sit down with a couple of the coaches and review some of the things that they think I could be doing better.

"Having that balance between the coaches at Glasgow and another set of opinions with Gregor and the other Scotland coaches is really good to help create more of an understanding around what everyone wants from me.”

The Scotland ‘A’ squad for the Chile clash is due to be named on Thursday.