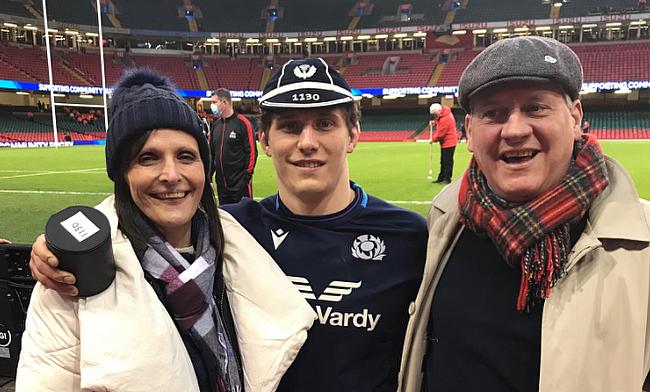 In January 2019, then just about to turn 19, up-and-coming Scottish Rugby prospect Rory Darge dislocated his knee.

Rory’s injury did not stop the then Scotland under-20 back-row rehab and get back to his best as quickly as possible and, since then, he has gone from strength-to-strength and has starred for Glasgow Warriors this season.

And although in some pain after a hospital visit, little brother Harris made it to BT Murrayfield just a few hours after his own injury.

That trip to the home of Scottish Rugby was to watch Rory making his first start for the full Scotland team against France in round three of the Six Nations.

Rory - and Harris - had both shown resilience in their own way to get there and middle brother Arron has also had to show resilience to break through in the football world with Heart of Midlothian.

They are a tough bunch the Darge family and Rory will need to be again this Saturday when he earns his third Scotland cap when he starts against Italy in Rome in the Six Nations.

A first try for Rory Darge on his first start ?? pic.twitter.com/0GF1QFSLNG

As she takes in the amazing atmosphere in the Stadio Olimpico with family and friends, Rory’s mum Nicola admits she will still be pinching herself that her “little boy” is starring in the showpiece tournament.

“From a very young age Rory was always determined and diligent in everything he did when it came to his rugby, but none of us could have imagined where he would get to quite so quickly,” Nicola told TRU.

“Growing up in Aberlady and attending the primary school in the village and then North Berwick High School, his love of the sport started at the North Berwick club and just went from there.

“As parents myself and his dad Kevin were just there to support him as much as we could, but Rory put in all the hard work himself and two things helped him when he was 17.

“One, he moved away from home to Galashiels to be part of Scottish Rugby’s Academy down there and attend Borders College and, two, he was into the Scotland under-20 set-up learning from older players around him.

“From there the hard work he put in seemed to intensify and, fast forward a few years, it really has been a whirlwind few weeks for him and the whole family.

“Rory was named in the wider squad for the Six Nations having missed out in the Autumn due to injury and then he was named on the bench for the game in Cardiff [in round two on February 13].

“He said that he wasn’t too nervous in the lead up to the game, but I can tell you I was and I was very emotional during the anthems because it was such a big moment and the atmosphere in the Principality Stadium was so brilliant.

“When he came onto the pitch his dad and I looked at each other and could not quite believe it was happening, but he did well and it was great to see him afterwards and get photos with family who were there.”

“We are just really proud”

Ten days after that game on February 23 Rory turned 22 and then, that weekend, he took on France and started at number seven with Hamish Watson pulling out with Covid.

“On the morning of that game we had a bit of drama with Harris’ injury, but once he and Kevin made it to BT Murrayfield we could all take in what was about to happen and it was just a brilliant day.

“When Rory scored his try we were quite far away and weren’t sure who had scored it, but when we saw on the big screen that it was him we were all pretty speechless!

“It has been quite strange having so many people talking about Rory in the last few weeks, but also exciting. He deserves to be where he is for all the hard work he has put in and I know that he will just keep his head down and keep working hard, he never gets ahead of himself.

“The whole family - including his grandparents - are so chuffed for him and we are just really proud, we are looking forward to watching him in Italy now.”

It is not just his family that are excited to see Rory play in Italy because, having signed a new long-term Glasgow contract earlier this week, for the first time he will be in the same Scotland back-row as the aforementioned Hamish Watson.

Both are natural sevens, but they will be wearing six and seven on their backs respectively this weekend and the breakdown battle should be fun as the Scots look to get back to winning ways.

So, what impact has Rory’s rise had on rugby in the town where he learnt it North Berwick?

“As he is only just 22 and his brother still plays locally, Rory is known by a lot of the kids in the local area and what an inspiration that is.

“He is such a down to earth, easy to talk to guy and the clubhouse was going mad when he came on against Wales and then started against France.

“Rory is a brilliant role model and the club - and the whole of East Lothian - are very proud of what he is doing and in awe of his talent.”

“He is not the biggest guy, but boy is he tough to shift”

Muir mentions East Lothian there and although it is region to the east of Edinburgh perhaps more well-known for its golf courses, in recent years a number of male and female rugby players from the area have gone on to great things in rugby.

Rory is the latest and East Lothian rugby development officer Jason Riley said:  “I remember first seeing Rory when he was playing under-16 rugby for East Lothian and what struck me was that he was not the biggest guy, but boy he was tough to shift and he had great footwork.

“As he got a bit older more and more representative rugby came for him with East Lothian and the Borders and apart from his talent on the pitch what struck me was his diligence off it.

“He took things like nutrition seriously from a young age and always wanted to be as fit as he could and was always looking to get the edge over opponents.

Things you love to see ??

“His work ethic then - and now - is something that many could learn from and he is just so down to earth and always wants to improve.”

“He has a big future ahead of him hopefully”

It was mentioned by his mum that Rory moved to the Borders in his late teens and while he was there he played club rugby and a bit of FOSROC Super6 stuff with Melrose and then the Southern Knights before his first taste of the pro ranks at Edinburgh Rugby.

Craig Jackson, the Scotland Sevens cap, was in both the Melrose and Knights squads with him and recounts:  “It can be hard for young players coming into senior environments, but Rory just got his head down early doors and earned respect quickly from older players just through his attitude and the way that he trained.

“It was clear from the off that he had good skills and good athleticism, but what I remember most was just the way that he put 100 percent into everything he did whether it was training or in a match.

“He soon came out of shell and got to know the guys socially too and I’m sure I speak for all the guys who were in those squads by saying we are really pleased to see what he is doing now.

“And the great thing is he is still young and learning the game, he has a big future ahead of him hopefully.”

Italy v Scotland kicks-off at 2.15pm UK time on Saturday in the Six Nations and is live on ITV Sport