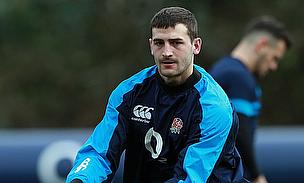 Gloucester winger Jonny May, who featured heavily throughout this year’s RBS Six Nations, has his eyes firmly set on a place in the 2015 World Cup squad.

May hopes that he can win the right to sit his World Cup entrance exams in New Zealand this summer, against the best side in the world.

After a full Six nations campaign on the wing, May does still know, however, that fit-again speedsters like London Irish’s (and soon to be Harlequins’) Marland Yarde will heap pressure on selection for the next month’s three-test tour.

The 24-year-old is refusing to take a summer touring berth for granted though, likening the mental challenge of international rugby to sitting landmark tests at school or university.

Admitting the chances to earn a place in England's World Cup 2015 squad are already thinning, May said: "There is a lot of pressure and there's great demand and stress, but it's about clearing your mind of all those things.

"I definitely learned a lot in the Six Nations.

"I think it highlighted how much the game at that level is a mental challenge.

"It's extremely demanding mentally, almost twice as much.

"It's a weird feeling before a game: it's basically as though you've got an exam, and you just hope you're fully prepared.

"The week is almost my revision in terms of preparation, in training, analysis, diet, stretching, everything.

"So that by the time the game comes you can just relax and everything then takes care of itself.

"That's where I want to be when the game comes.

"Nerves are healthy and you know you'll be under pressure, but you believe in yourself and trust in the preparation to go out and produce the goods.

"Stuart came in last week; he just wanted to catch up with Nigel and a few of the players at the same time.

"He just said keep going, and that coaches understand it's been relatively difficult here this season.

"But I don't like to make excuses, I would have liked to have done a little bit more since coming back from the Six Nations.

"I'm just going to keep working hard and give it another good go."

Hoping to pick up where he left off in the Six Nations in New Zealand, May admitted chances to impress Lancaster with a view to 2015 are already running out.

"With the fact the Premiership finalists won't be in that first Test, there will obviously be players missing from that match," said May, keen to keep expanding his game on the advice of the England coaches.

"People are going to get chances and so it's got to be seen as a great opportunity.

"Even though I try not to look too far ahead it's something you can't avoid because it's such a big draw, the World Cup.

"I feel the Six Nations went well and I put down a good marker, and hopefully I'll be able to do that in New Zealand, after finishing off with a good game this weekend.

"There aren't many more chances for new people coming in to get their foot in the door, so this may be a last chance for people who haven't been involved to put their hand up.

"Luckily I've already had an opportunity to get involved, so maybe I'm one step ahead of people who haven't had a chance yet.

"So I've just got to try to stay ahead and that's a big challenge.

"It's almost a transition where I'm trying new things and those won't all come straight at once but I hope that it will all come together soon.

"And I know I've got more to offer.

"You've got to keep adapting and incorporate new things, but also in the process understand it may take your performance down a notch in the short term, but hopefully in the long-term you gain and are better overall and can reach the next level."