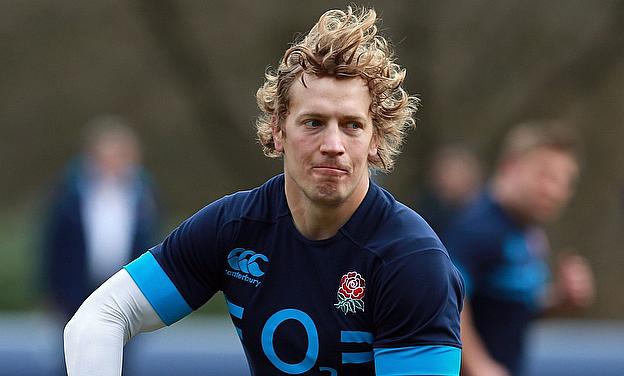 Gloucester boss Nigel Davies has said England centre Billy Twelvetrees is to be ruled out of action for “four to six weeks” and is therefore unlikely to be on the England plane to New Zealand this summer.

The Gloucester centre suffered an ankle injury in his club side’s 38-30 Aviva Premiership victory over London Irish on Saturday.

England had hoped to have the 24-year-old available for the first Test against the All Blacks in Auckland on June 7.

Gloucester boss Davies confirmed former Leicester centre Twelvetrees does not need surgery but may now not be fit in time for either England's first or second Tests next month.

"It looks like an injury that will be between four to six weeks before it's right, so not great for him, obviously, Billy having had such a good season overall," said Davies.

"It's not ligaments, it's a relatively minor injury in his ankle, but it will stop him from playing for between four to six weeks.

"It doesn't need an intervention at this stage.

"He's had a long period of rugby if you think about the tours as well with England and going with the Lions last summer.

"So it will give him a good chance to have a good pre-season and hit next season on top form."

England head coach Stuart Lancaster is already without the Aviva Premiership finalists for the first All Blacks Test, with just seven days between the two matches.

Should Leicester and Saracens reach the Premiership final on May 31, Lancaster would be without Manu Tuilagi and Brad Barritt for the first Test.

If Northampton Saints reach the final then England must do without Luther Burrell, who formed a potent partnership with Twelvetrees during the Six Nations.

Leicester hooker Tom Youngs is staying at home to look after his ill wife, while Dylan Hartley and Rob Webber are battling for fitness.

Lancaster has opted not to risk Alex Corbisiero and Tom Croft, despite the British and Irish Lions duo recovering from long-term knee trouble.

Former Wales and Scarlets coach Davies refused to rule Twelvetrees out of summer action with England, but conceded the playmaking centre has a battle on his hands to play a part in New Zealand.

"When we talk about injury recovery times we're talking ball-park in the main and you normally get variations within that.

"So if he recovers more quickly than expected, there's a chance."

England boss Lancaster installed Twelvetrees as his first-choice inside centre for the RBS 6 Nations, moving the Gloucester star ahead of Saracens' defensive fulcrum Barritt.

Davies backed Twelvetrees to retain strong regard in the international set-up, regardless of the Kingsholm midfielder's summer tour situation.

"Stuart Lancaster has shown a lot of faith in Billy and that's great," said Davies.

"So he's in the mix in the bigger picture of the World Cup.

"What's important for all the players with international ambitions next year, effectively, is next season.

"The most important thing is for players to get themselves in the right state of fitness and frame of mind for a big season next year.

"One of Billy's big strengths is that he's very robust as a rugby player and doesn't tend to pick up too many injuries.

"It's unfortunate for him because overall he's had a very good season.

"It's a double-edged sword, the more exposure to international rugby your players get, the better they become.

But Billy's had a long period of rugby, so to freshen up now and get on top of things for next season may not be a bad thing.

"There's always pressure on international players, because when you're up there and you've got the shirt you're there to be shot at.

"I think Billy offers something different so that's his point of difference, because he can get over the gain-line but manage games very well too as he can step up as first-receiver too and has a very good kicking game."