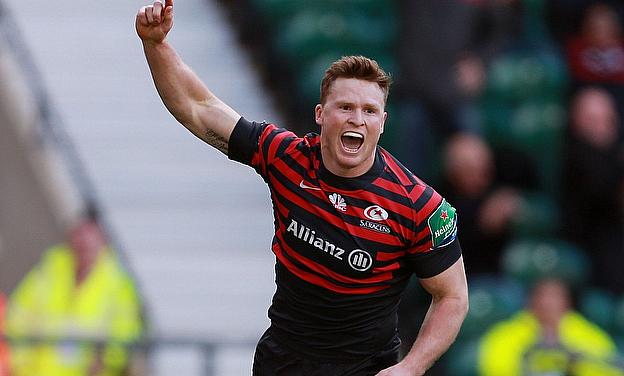 England scrum half Danny Care believes that Saracens flyer Chris Ashton has propelled himself back into England contention after plundering the tries that have placed the London side on the brink of a first Heineken Cup crown.

The Wigan-born rugby league convert has crossed the whitewash 11 times on the European stage this season following his double in Saturday’s emphatic 46-6 semi-final destruction of Clermont.

The 27-year-old, who scored one of England Rugby’s greatest tries against Australia at Twickenham in 2010, lost his England place during the recent RBS 6 Nations, but would have been relieved of Test duties sooner had Christian Wade and Marland Yarde not been struck by injury in the autumn.

Having finally lost patience with a player who made a blistering start to his international career, England's management instead opted for Jonny May and Jack Nowell in the Six Nations.

However, Ashton is almost certain to be recalled for the summer tour to New Zealand, particularly after the news that both Christian Wade and Jack Nowell are ruled out due to injury.

Care is excited by the rugby league convert's form and added his voice to the chorus calling for his return in an England jersey.

"Chris was disappointed after missing out on the Six Nations and he's since shown what a wonderful player and finisher he is," said Care on behalf of O2 Touch, a nationwide touch rugby programme run by England Rugby in partnership with O2.

"Scoring 11 tries in the Heineken Cup this year is not a bad effort and he is pushing to get back in the England team.

"I've played with Chris a fair few times and I know he's a massively competitive lad who wants to play for England as many times as he can.

"He dealt with the criticism he took really well. It's never easy to be turning up for England training and then going home every Tuesday.

"But he did it graciously, he did it with a smile on his face and helped out the other lads who were selected. He was the first one to congratulate Jonny and Jack.

"He's a true professional who did what you have to when you're not selected, which is to go away and try and prove people wrong.

"We have some brilliant wingers, but Chris is right up there at the moment.

"Saracens as a whole were outstanding. I thought before the match they'd win, but not by that score-line. It was an unbelievable win."

Another spanner in the works for Stuart Lancaster’s men is the absence of Premiership finalists for the first test due to the undue timing of the Twickenham showpiece – just a week before the first test in Auckland.

Head coach Stuart Lancaster has already worked out the various permutations with a Saracens and Northampton final appearing the most likely outcome.

Care looks set to be involved against the All Blacks at Eden Park alongside Harlequins team-mates Chris Robshaw, Mike Brown and Joe Marler, but the scrum-half has not given up hope that his club will reach the play-offs.

"We just have to dream that we can do it. It's out of our hands, but we'll know by Sunday when we get to our game against Exeter what's happening," he said.

"We might beat Exeter and beat Bath, but still not make the play-offs. We won't die wondering, we'll give it our best shot.

"You want to play in the semis and the final, so we'll win as many games as we can.

"And if we don't make it then I'll be available for that first Test, so it's win-win.

"We'll be missing our Premiership finalists, but it won't just be that first Test that's difficult, the second and third will be tough as well."