Max Argyle Exclusive: "It was quite nice to give something back to the club" 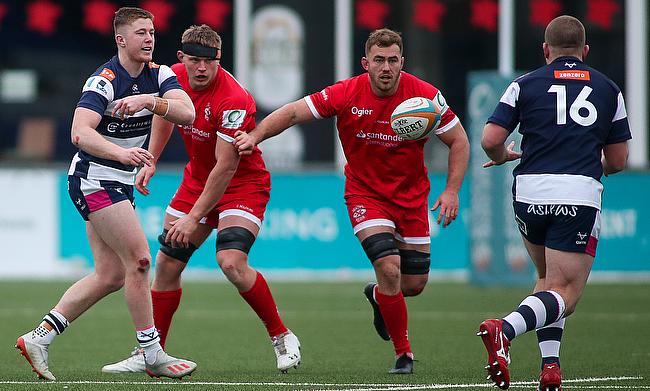 Finally, rugby came back… to The Rock.

After a long 14 months, Jersey Reds are playing on the Island once again where they’re joined by a raucous home support.

A year in the wilderness was followed by having to spend the first five rounds of this Championship season flying into the mainland, but that all changed as the grand homecoming a fortnight ago coincided with over 1,000 spectators in attendance, the first crowd at a rugby match in the British Isles since September.

With the sun beaming down, fans flooding through the gates at St Peter and a squad desperate to put on a show, visiting Nottingham were always up against it, so perhaps it was no surprise when Jersey came out the other end with a club record 55-12 win as a professional outfit.

It served as a literal shot in the arm for the locals and a glimmer of hope for the wider rugby community that some sort of normality is edging nearer.

What an atmosphere at yesterday's game! Some great shots from Rich Chapman - the full set's at https://t.co/YyEtNCwyc8 ???????? pic.twitter.com/bohKhLSOpm

In serving up nine tries and over half a century of points, it was clearly an occasion also enjoyed by the Jersey players, including flanker Max Argyle, who will be hoping for more of the same against Coventry this weekend.

“It was fantastic, Argyle said. “It was obviously really nice to be back at home with a crowd which I suppose was quite an event in a lot of ways. It was great to be able to perform well and get a good win in spite of what’s been a challenging season all round for everyone, really.

“It also basically felt really normal and it was even better to top it off with a performance and a win for everyone involved. It was good to be able to put something on for everyone who’s supported us and been involved throughout, obviously the history of Jersey, but through the pandemic and from the start of the season, we’ve had a lot of support from fans, sponsors, the local community, the government over here and everyone who works for Jersey Reds so it was quite nice to give something back on the day.”

Without overstating the obvious, the pandemic hasn’t been ideal for any of the clubs involved in the Championship, but particularly Jersey. Having conceded home advantage for the first two games they were due to host this season, they had five successive day trips over to England with no overnight stays.

They managed just the one win from that run in what proved to be a testing start to the campaign, but it was never used as an excuse internally despite all the added disruption.

“The trips are actually incredibly smooth because there’s no traffic in the airports or on the roads,” adds Argyle. “We’ve been quite fortunate we’ve got chartered flights everywhere as well so the travel couldn’t have been easier, but as everyone knows, going away can be difficult irrespective of the situation.

“Unfortunately, we didn’t perform well enough when we got there which I think we’d all admit is nothing to do with the travel. We just haven’t performed on the day. Maybe you could say the travel hasn’t been ideal, but it has been faultless and incredibly smooth.

“I know people have their personal preferences, but ultimately teams go on six-hour bus trips every week and win away from home, so I think it’s probably been overstated.

“To be fair, not that anyone has made any excuses for themselves or poor performances, but it does make a big difference having supporters back and everyone wants as many fans as possible at every game. We like to be professional and you don’t want to make excuses anywhere you go, but ultimately fans in a stadium or at a ground make a big difference.

“We haven’t been going through the motions in any way, shape or form so we’d been really dissatisfied with the results and hopefully we can kick on now into the last part of the season and make something of it. “

After navigating what is still an incredibly testing period, things look to slowly be on the up again for the Reds.

That swashbuckling victory on the grand return was followed up with another down at Ampthill, which meant Jersey secured back to back wins for the first time since November 2019.

Now a very well established Championship club having been promoted to the second tier for the 2012/13 season, Jersey regularly compete towards the upper reaches of the table, winning plenty of admirers for their exploits and unique situation.

Having spent much of his senior playing career in Yorkshire, including three seasons at Rotherham Titans, Argyle made the move across the channel back in 2016, going on to establish himself as a key member of Harvey Biljon’s squad in what has clearly been a mutually beneficial journey.

“I personally absolutely love it!” Argyle says. “I think it’s a bit like marmite for some people depending on what their personal preference is. I think the only way to truly understand it is to come over and visit to have a look around yourself, but I love it. It’s a good life.

“I don’t want to say it’s easier, but it’s smaller, the weather’s nice, there are beaches everywhere, short commute to work! I’ve met some people who I would consider really good friends here now through the club, including sponsors and supporters.

“I’d been once or twice with Rotherham and I used to come on holiday with my family years ago before that, so I was sort of familiar with the place, but you don’t really know a place until you live there, do you?

“I got asked to come over in 2016 off the back of three years playing for Rotherham. I’ve really enjoyed the rugby. I really enjoy spending time at the club. I’ve really improved and continue to do so from being here.

“I am obviously ambitious in a rugby sense still, however, I think you should make the most of what’s right in front of you. I’ve loved it personally and professionally. It’s been fantastic. My family enjoy coming over as well so that’s a bonus.”

Despite the isolated, for want of a better word, existence, the Reds reputation, infrastructure and success ensures they continually build and compete.

Year after year, Jersey are able to belie the division’s usual player turnover to put together highly impressive squads.

As per the norm, their back row has always been an incredibly competitive position with the likes of Guy Thompson, Gary Graham and Nick Haining establishing themselves during seasons spent at the Reds before going on to higher honours.

The current squad includes another excellent selection of options for the back of the scrum, including Argyle.

“Fair play to Harvey (Biljon) he recruits well,” Argyle continues. “There’s been a number of players who’ve gone to the Premiership and international level, whether that’s through signing here and moving on or coming on loan and getting a load of game time to kick on to make that level.

“I think the club, the community and the state do really support the team. Not that other places don’t, but it’s quite a unique environment over here.

“If you’re a player with aspirations and you see other players kick on from Jersey, you might think ‘I’ll have a bit of that’.

“Competition is always good for performance. We’ve always had good back rowers here. Every year I’ve been here, it’s been probably the most competitive position to get into. Basically, if you don’t play well, you’re probably not going to get picked the next week, which is fair enough and probably why so many of the back rowers here have kicked on to the next level.”

Whilst echoes of the past are heart-warmingly impressive and the present looking to be back on an upward curve, it’s the future that can now be considered again for Jersey Reds and indeed for Argyle himself.

“I think the club have shown that they are ambitious and would like to kick on as far and as high as possible,” he says. “Of course, it’s a big challenge, but it is one the club have always been keen to take on and I think we’ve always put a good account of ourselves in on that front.

“Personally, I would be the same. I am still, and always, will be very ambitious, but I would personally take every opportunity to play as well as I can and enjoy and improve for Jersey before just purely looking at what’s out there in the future because then you miss what’s right in front of your face.

“I’m ambitious as is the club, but you’ve got to look at what’s right in front of your face first and hopefully the bigger picture will take care of itself.

This is not a club, and he is not a player that will rest on their laurels. How could they with the return of that raucous home support which will be present again as the Reds host Coventry this weekend.