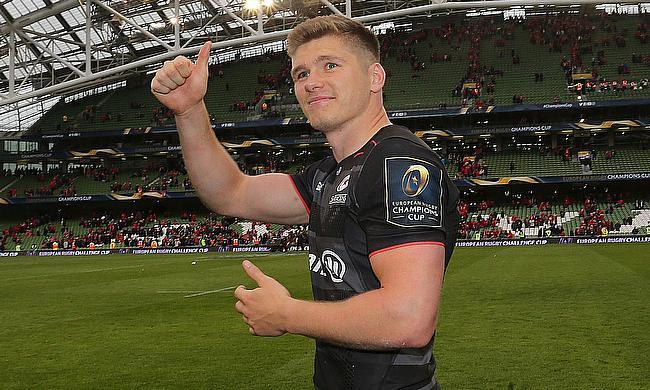 Sam Warburton: ‘You have to have some common sense and let players go’
Colossal clash between Ealing Trailfinders and Saracens could prove pivotal in promotion picture
Connacht sign Mack Hansen from Brumbies
Bristol v Exeter will be the tonic the sporting world needs after European Super League shambles

What a weekend of action. This one had it all.

Perfect conditions resulted in a glut of scoring, with 40 tries and just shy of 300 points across the five games in Round 7 of the GK IPA Championship.

There was late drama, shock results, bonus points aplenty and a huge shake-up at the top.

Coventry eventually came away from Hartpury with a handsome looking win, but it was far from plain sailing.

The first half saw huge swings of momentum, with Cov down two men and five points heading towards the interval before the visitors dominated the second period.

Coventry started the better of the two teams, Jordan Poole crashing over in the opening minutes before he turned provider at the end of the opening quarter to put Ryan Burrows away.

Their hosts came back swinging as Robbie Smith raced in to hit back for Hartpury whilst dual-registered wing Sam Aspland-Robinson found himself in the sin bin.

James Williams added a penalty for the home side to put them back within touching distance, and soon they were in the lead for the first time, two men to the good.

Cameron Jordan became the second Coventry player shown a yellow card and the sanction was hammered home when Toby Venner tapped and went to put Hartpury ahead just minutes from the break.

Still, there was time for another lead change as Tony Fenner eventually finished off an attack before converting his own score to give Coventry a slender 19-17 advantage.

The second period began in much the same vein as the first, with the trading of scores keeping the match finely balanced.

Cov secured the bonus point when Senitiki Nayolo crashed over, whilst Hartpury responded just inside the hour when Williams sent Venner over for his brace.

Then came the conclusive period which Coventry dominated with three unanswered scores to well and truly put the game to bed. Replacement back-row Sam Lewis added the finishing touches for a quickfire double in nearly as many minutes before Cameron Jordan had the final say with Cov’s seventh try.

Ampthill snatched a win with a late penalty for the second successive week to achieve another historic result for the club. Pirates have now lost successive games at the Mennaye after remaining unbeaten at home for 18 months and will now have a battle for a top-four finish given their recent slump in form.

It all started pretty well for the hosts as Will Cargill sent an early penalty through the posts before Alex Schwarz dotted down to give them an 8-0 lead in the opening quarter.

The A’s chipped away at that cushion through the boot of Louis Grimoldby, who was successful with back to back penalty attempts as halftime approached.

That still left time for Pirates to add a second, as John Stevens went over from the restart, and the testing kicking conditions meant there was a 13-6 home advantage at the break.

Grimoldby added a third penalty soon after proceedings resumed, and just minutes later, the A’s took the lead for the first time when debutant Richard Streets put the finishing touches to some great work from TRU Columnist Charlie Beckett.

Into the final quarter and Pirates began to pile on the pressure. Syd Blackmore and Joe Bercis were sent to the bin just minutes apart, in between which the home side moved back ahead as Schwarz made it a double.

Ampthill coped well whilst a man down as replacement Russell Bennett added another penalty to continue where Grimoldby had left off. As time ticked away, it was Bennett who made no mistake once again from the tee, securing a third win in four for the Mob and one of their biggest ever results on the road.

Rugby was finally back on the Channel Islands and Jersey made up for lost time to give the 1000 or so fans in attendance a feast of attacking rugby.

The tone was set early as Jersey sent Jack Macfarlane over inside the opening five minutes to the delight of their supports. Nottingham did respond through Luke Mehson’s score soon after, but that was to be the last time they were within touching distance in this contest.

Matti Williams rampaged over the whitewash for the hosts before Brendan Owen danced his way to a first-half double. Brendan Cope managed a trio of conversions to give Jersey a 26-5 interval lead, the bonus point already in the bag.

Two more great sets of ?? from yesterday's great game v @NottinghamRugby - thanks to Sue Armes & Jacquie Ranieri for their work behind the lens ???????? - full albums at https://t.co/3i5jWsg0TI pic.twitter.com/rLovzIXFDZ

They soon increased that gap when Max Green dotted down and Owen intercepted the ball to help himself to a hat-trick. Nottingham briefly responded through Luke Frost after a charge down, but that would conclude the visitors scoring.

Ollie Dawe crashed over and Jack Roberts also got in on the scoring action for Jersey to finish off a flowing move. With Nottingham continuing to play with the clock in the red, they coughed the ball up and Dan Barnes pounced to add further gloss to the scoreline.

Doncaster responded in style to last week’s home defeat to secure just their second bonus-point win of the season. Richmond took over an hour to get on the board, and with the game in the closing stages, any hopes of a positive result were long out of reach.

Howard Packman opened the scoring out wide after the Knights had turned down a shot at goal in favour of the corner, and things got worse for Richmond when Oli Evans was sent to the naughty step as the aforementioned Packman added his second.

Richmond were repelled once more before Donny scored a third for a commanding half-time lead. Jake Parker became the second, but not the last, home player sent to the bin and the Knights capitalised as Guido Volpi went over. Sam Olver added a second conversion and it was19-0 to the visitors at oranges.

It didn’t take long for that winning margin to be increased and the bonus point was secured when Will Holling rumbled over at the back of a driving maul.

Back to a full complement for a matter of minutes, Richmond fell foul of the yellow card twice more in quick succession. First Jack Allcock and then Dan Kelly were given a 10-minute breather to leave their side two players light.

Somewhat surprisingly, Richmond were next to score as Max Trimble found a way to the line to finally get the hosts on the board. Jimmy Litchfield became the fifth Richmond player into the bin and some moments later, Jack Davies crashed over for the visitors.

Callum Watson showed all of the family traits to score a fine consolation from his own half, but Doncaster still had time for another as Jerry Sexton went over with the final play and Billy McBryde added the extras for a 40-12 margin.

What a statement from Saracens.

After easing through their opening six games with a victory on each occasion, Ealing found themselves on the receiving end this time out.

Comfortably beaten in the end and without so much as a bonus point for their troubles, this represented the star quality and big game mantra that Saracens possess.

Sarries quickly worked their way into a 10-0 lead inside as many minutes. Owen Farrell slotted an early penalty, before Alex Lewington notched yet another try off the back of a brilliant team move.

Ealing began to work their way into the contest as a pair of Craig Willis penalties sandwiched another from Farrell. Vincent Koch then crashed over for a second converted Sarries try to stretch their lead once more.

Catch the full highlights below ??#StrongerTogether ????

A further period of Ealing pressure did bear fruit as the interval approached. They were awarded a penalty try when a maul was brought down illegally and Jackson Wray received a yellow card off the back of that action.

There was still time for Farrell to kick another penalty meaning the hosts had a 23-13 advantage with another 40 minutes still to play.

To open up the second period, Sarries' metronomic skipper nudged over another two penalties. From there, the former Premiership and European champions killed the game off. Koch barrelled over again and Aled Davies added to last week’s brace by finishing off a wonderful team effort for the bonus-point score.

A frantic finish saw a depleted Ealing follow up a sin-binning for James Cordy Redden with a consolation try from Shane Buckley, but a second yellow for the visitors against Lewis Thiede added to their woes.

Nick Tompkins put the cherry on the top of the Saracens victory as he scored with the final play to seal a huge win.