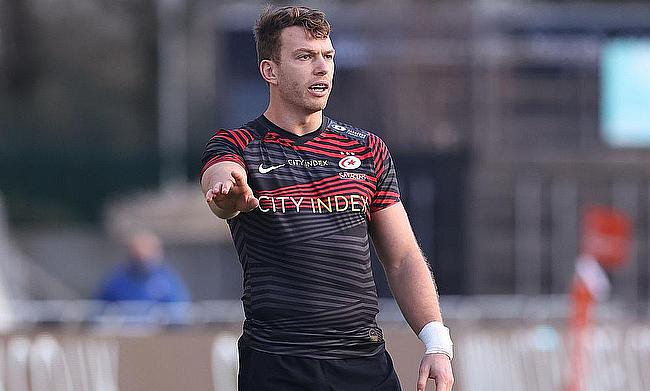 Alex Lewington was on the scoresheet against his former club Nottingham
©Matt Impey/Wired Photography
Another round ticked off and so too the second block of the season.

Four bonus-point wins and not a single losing bonus point in a weekend which saw some familiar winning margins from the usual suspects.

Now comes another fallow week before the sprint finish truly gets underway. Before that, catch up on all the goings-on from Round 8…

Jersey backed up last week’s fine performance with a bonus-point win against an Ampthill side who had come into this one with some sound recent form of their own.

The Reds were quickest off the mark, grabbing an early advantage through Tom Williams’ unconverted try inside the opening 10 minutes.

?? Our selection from R8 of @Champrugby.

The lead then changed hands twice in the second quarter as Ampthill got on the board after working room for Will Foster to score before Jersey hit straight back when Scott van Breda was sent over.

Dan Barnes added a third for the Islanders before the break, Brendan Cope’s conversion giving them a 19-7 advantage at the interval.

Ampthill worked their way back into the game and eventually got some joy when Will Brown profited from a kick to score, but any hopes of a turnaround were extinguished when Cope kicked over a penalty before Barnes helped himself to a second to secure the bonus point in the final play of the match.

The first occasion this fixture has thrown up an away win since Coventry won promotion back to the Championship in 2018.

Pirates bounced back well from last weekend’s disappointing defeat to take the spoils against a Cov side who still sit right on their tails in the table having played a game fewer.

The visitors were first on the board when some early pressure allowed Arwel Robson to slot a penalty over, but an in-form Coventry - who’d won three on the spin - came roaring back as James Harper rounded off an excellent team move.

In what was a see-saw affair throughout, Pirates reclaimed the lead soon after, finding space for Rory Parata to slice through for a converted score.

They added to that advantage when Robson sent over another penalty after making a dangerous looking break.

That proved to be the last score of the half, despite the final 15 minutes seeing Antonio Kiri Kiri sent to the bin for Pirates and Cov having a Ryan Burrows effort ruled out for not tapping the ball on a penalty.  A 13-7 Cornish lead at the break.

In a nod to the opening period, the second started in much the same vein. Robson added another penalty before Coventry soon responded with another try, this time Sam Aspland-Robinson applying the finishing touches.

Clearly tired of knocking over penalties, Robson added a converted try to his ever-growing tally to give his side some breathing room at 23-12.

Tommy Wyatt became the second Pirate to be yellow carded as the final 10 minutes approached and his indiscretion was quickly punished as Cov worked a try for Andy Peters, which Tony Fenner converted to make it a four-point game.

There was to be a final score and it went the way of the Pirates as Shae Tucker stayed in support to score the settler, Will Cargill this time adding the extras.

Neither side could find a bonus point as time ebbed away, leaving it at 30-19 to the Pirates.

Hell hath no fury like a promotion chaser scorned.

Ealing showed no hangover from last weekend’s first defeat against Saracens as they picked up from where they’d left off previously in another local derby.

Scoring at regular intervals throughout, it took just minutes for Ealing to work a first and it was Charlie Walker who raced over on his long-awaited debut.

Will Davis was the next to dot down as Ealing continued to add to the scoreboard despite Richmond slowly working their way into the match.

The hosts continually repelled the Richmond maul, soaking up any pressure exerted on them before adding a further three tries as half-time approached.

First, Craig Hampson was sent through at the end of a scything break, and then skipper Rayn Smid added yet another try to his collection by cruising over before the excellent Max Bodilly crossed against a tiring defence for a 33-0 Ealing lead.

Richmond did get themselves on the board soon into the second period as Callum Watson put the finishing touch on a flowing breakaway.

That was to be the only joy for the visitors, and normal service was soon resumed as Ealing continued to rack up the scores.

Three successive prop tries saw Lewis Thiede crash over before his replacement Kyle Whyte helped himself to a double.

Richmond then threw an intercept deep into Ealing territory which Hampson profited from to run the distance for his second, a feat which Bodilly matched by securing a brace of his own. Shane Buckley was left to have the final say, capping off the performance with his side’s 11th try of the afternoon.

A first nilling of the season as merciless Saracens continued their all-out assault on promotion against Nottingham, who have suffered immensely on the pitch over the last fortnight.

Andy Christie opened Saracens’ account, rumbling over from close range with Owen Farrell adding the extra two on what turned out to be a perfect day from the tee for the England captain.

Both teams saw chances go begging as Saracens struggled to add a second before Nottingham old boy Alex Lewington extended his purple patch, cruising over to double his side’s advantage.

Things got better for the visitors just before the break as Dom Morris added a third after Nottingham had seen Ben Betts sin-binned, meaning a 21-0 Sarries lead as they headed for the sheds. 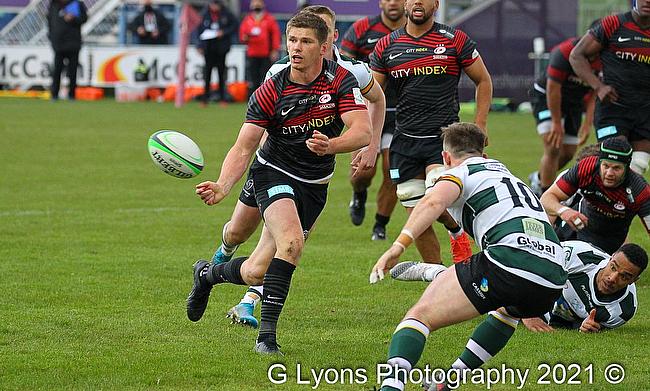 Owen Farrell further put forward his case for British and Irish Lions selection
©Gareth Lyons
The Men in Black cranked it up a notch after the break, forcing a penalty try from a maul along with a second Nottingham yellow for Luke Frost before Lewington danced his way over for a double.

Sarries were well oiled by now, Elliot Daly cut through a hole before feeding Tom Whiteley to scamper over.

The Wolfpack then showed their defensive prowess to keep their line from being breached, withstanding some heavy pressure before adding further gloss to the scoreline.

Replacement prop Eroni Mawi bumped his way over the line, and Harry Sloan took them past the 50-point mark as he crashed over in the final stages for a resounding Sarries triumph.

Sunday served up arguably the game of the weekend as Doncaster battled their way to a bonus-point victory against a hugely competitive Bedford who were unlucky not to come away with anything from this contest.

The Blues came flying out of the blocks to rattle their hosts and surge into a 12-0 lead.

Connor Joyce was sent to the sin-bin for the Knights, allowing Bedford a man advantage which they duly capitalised on as Oli Robinson drove over.

He then turned provider setting Josh Gillespie away for their side’s second, all whilst still a man to the good.

Doncaster had work to do to keep themselves within play-off contention and indeed this particular contest.

The hosts did get the ball rolling as Billy McBryde raced over to cut the deficit, but Bedford soon responded through Ollie Newman as half-time approached.

With the clock nearing the red, Donny conjured up another score to make hopes of a second-half comeback more manageable, forcing a string of penalties before evergreen Matt Challinor went over to leave his side 19-12 down at the break.

The Doncaster pressure continued into the second period. Denied early having been camped on the opposition line, they got back within a couple of points as Will Holling crashed over and Sam Olver’s penalty hit the upright.

Having led since the early stages, Bedford then coughed up the lead, unable to stem the flow of penalties against them. Newman was sent to the naughty step for a hit on Olver, who dusted himself off to nudge through the resulting penalty from the tee.

It was all Doncaster in the second period, the momentum proving decisive as McBryde’s late second wrapped up the result and the bonus-point for his side whilst Bedford were left scratching their heads as to how they were unable to capitalise on their flying start.