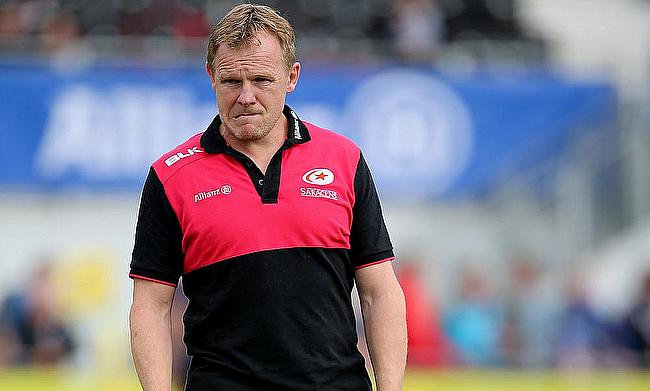 This week, Saracens Director of Rugby McCall re-signed with the club for at least a further four years
©PA

Saracens power past Doncaster Knights and Ampthill pull off remarkable fightback
Matt Challinor Exclusive: 'We can be a match for anybody on our day'
Test of title credentials as Doncaster Knights take on Saracens
Ealing dominance continues and England pair shine for Saracens

What a mega round of action coming up.

No Friday night lights, but a quadruple of games on Saturday followed on Sunday by one of the most eagerly awaited Championship clashes in the league’s history.

Forget talk of any European Super League, this is where you want to be investing your attention and energy, so purchase yourself a live stream to some of the match-ups and see what the fuss is about.

Here’s what Round 7 has in store:

Our action gets underway with two familiar foes reigniting their rivalry.

They spent three seasons battling it out in National One before Hartpury were promoted as champions in 2016/17. It was a feat which Coventry matched the following year to reach the second tier, where they’ve faced off ever since.

Pury had the better of life in National One, winning five in a row against Cov after dropping the first game, but the Championship has provided a far more even battleground. The three meetings between the sides have gone the way of the hosts by a single score on each occasion.

It’s been a rollercoaster fortnight for Hartpury. Firstly, they snatched that win against Nottingham with the clock in the red before last week’s epic at Ampthill, which ended in late defeat. This now provides an opportunity to regain some momentum before they enjoy two weeks off.

Cov have quietly gone about their business to position themselves in fifth with three wins and 15 points from five games so far. Their losses have come against high-flying Ealing and Doncaster so a top-four place is certainly within reach and a win here is crucial for that ambition to remain alive.

Expect a close one.

In a complete contrast to familiarity, these sides meet for just the third time ever having only been introduced to one another last season.

Pirates won convincingly home and away in 2019/20, a trick which they could do with repeating if they want to remain in the promotion hunt. Their long-running unbeaten home record was finally surrendered in their last match at the Mennaye against Ealing.

The A’s will have been buoyed after overcoming a lofty deficit to stun Hartpury last week. It was a game where they looked down and out on more than one occasion, so it will be interesting to see how much that saga has taken out of them.

It’s one of just two games this weekend where both sides come into it off the back of a win, and another victory here would do wonders for either team’s respective seasons.

Pirates could steal a march on whoever takes the fall in Sunday’s clash, whilst Ampthill could begin a move away from the midtable logjam with an eye on matching last year’s fifth-place finish.

Rugby is finally back on the Island and in fact, so are fans!

The visit of Nottingham will be Jersey’s first home game since last February and the first time fans have been at a rugby match in the British Isles since September.

It should all make for a celebratory occasion, with the Reds having spent the first five games of the season on the road experiencing the empty stadiums which have been a depressing image throughout the pandemic.

Friendly formalities between the sides will be reserved for the full-time whistle because this is a ‘basement battle’ pitting the league’s current bottom two together. A decent result would provide some welcome relief for the potential victors after both have suffered difficult starts to the season.

A sole win for Jersey sandwiches a quartet of losses, whilst Nottingham have been unsuccessful in each of their five games up to now, though there have been some close calls as of late.

The last time either side was successful on the other’s patch was back in the 2016/17 campaign when each won the away leg, meaning you have to turn the clock back to September 2016 for the last time Nottingham won in Jersey, courtesy of a converted try with the last kick of the game to edge it 22-21.

Drama of that order would certainly give those in attendance their money’s worth.

The fourth and final game of Saturday’s bonanza sees Richmond welcome Doncaster as two sides with contrasting fortunes look to bounce back from defeats.

Richmond have managed just a solitary win up to now and sit ninth, whilst on the flip side, Donny suffered their first loss of the campaign at home to Saracens last week but clung on to second spot in the division.

Perhaps Richmond’s biggest concern so far will be their lack of tries. They have mustered up just six in five outings and it is comfortably the least in the division with the two sides beneath them on the next fewest - Jersey 10 and Nottingham 11.

Donny were by no means disgraced in defeat last week, but it did prove somewhat of a humbling after a near perfect start. They remain in the playoff picture but can scarcely afford any more slips up in the run-in.

It’s been a couple of years since they last faced off with Richmond, who spent last season in National One, and Donny won both games between the pair in 2018/19.

This will go a long way to settling the final fortunes of these two, with remaining fixtures fast running out.

Ladies and Gentleman, the one you’ve all been waiting for.

It might be presumptuous to label this a dress rehearsal for the playoff final, and the other contenders certainly shouldn’t be written off, but this one has been hotly anticipated ever since Saracens were confirmed as being relegated to the Championship.

Aside from being a very local derby, these two have been in scintillating form of late so this one has all the makings of a classic.

Ealing have been near flawless this season. They have secured six bonus-point wins from as many games whilst also preventing any of their opponents from escaping with so much as a consolation bonus point of their own.

Excitement levels through the roof for this one ??#StrongerTogether ????

The Trailfinders haven’t lost in competition since December 2019 when they were toppled by Newcastle Falcons and could put one foot in the final if they are successful on Sunday.

Saracens have responded in kind to that chastening opening day defeat down in Cornwall, following up with a quartet of commanding bonus point wins whilst welcoming back a succession of their big guns.

These two share the best attacks and defences in the division this campaign. Ealing have scored a staggering 50 tries up to now whilst allowing just 10 against and Sarries have managed 31 scores and conceded just seven.

Let’s put it simply, this colossal clash on Sunday will be epic.

The Blues have played some lovely stuff in parts this season, which was reflected with a third Championship Try of the Week win, without always getting the results to reflect their ambition.

It all came together with that big victory against Richmond last week to move up to sixth and they’ll be hoping for more when they return with a trip to Doncaster next Sunday.

It’s all to play for.