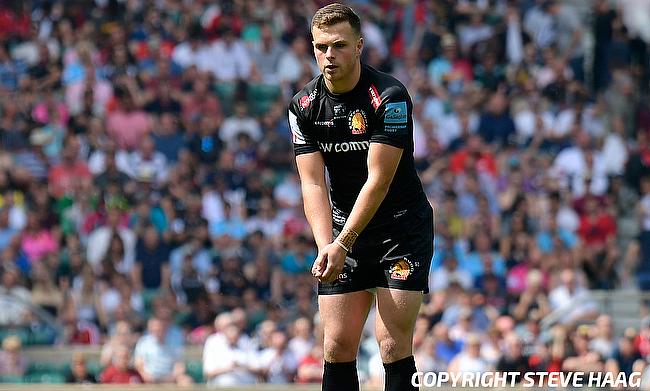 Joe Simmonds kicked the decisive penalty goal in the closing stage as Exeter Chiefs edged out Newcastle Falcons with a one-point margin in the latest round of Gallagher Premiership at Kingston Park.

This is ninth win for Exeter in 16 games as they move to the fifth place in the table while Newcastle are at 11th position.

Rain and strong winds made it increasingly tough for teams to get the initial breakthrough which eventually came in the 23rd minute when Will Haydon-Wood intercepted a pass from Sam Maunder with the fly-half covering a distance of 70m to crossover for the opening try.

Haydon-Wood also kicked the conversion as the Falcons raced to a 7-0 lead but their momentum was dented as they were down to 14 players with Callum Chick red card after his shoulder made contact with Josh Hodge's head.

Exeter finally made use of the numerical advantage with the break approaching as Patrick Schickerling dotted down at the back of a line out maul and Simmonds landed the conversion as the scores were levelled 7-7 at the end of the opening half.

The visitors were the quickest to get off the block in the second half as Jack Innard crashed over but this time Simmonds missed the extras as the scoreline became 7-12.

Despite being down by a player, the home side made a strong comeback as George McGuigan crossed over after good work from Mathias Orlando and George Wacokecoke and Haydon-Wood's conversion meant Newcastle had a slender two point lead leading into the final quarter.

Newcastle managed to keep the Chiefs down and maintained their lead until the 76th minute when Exeter won a scrum penalty and Simmonds kicked the three-pointer to perfection to steer Exeter to a 15-14 win.

Newcastle Falcons will be hosting Bath Rugby next in the 17th round at Kingston Park on 26th February while Exeter Chiefs will be taking on Northampton Saints next at cinch Stadium at Franklin's Gardens on 27th February.