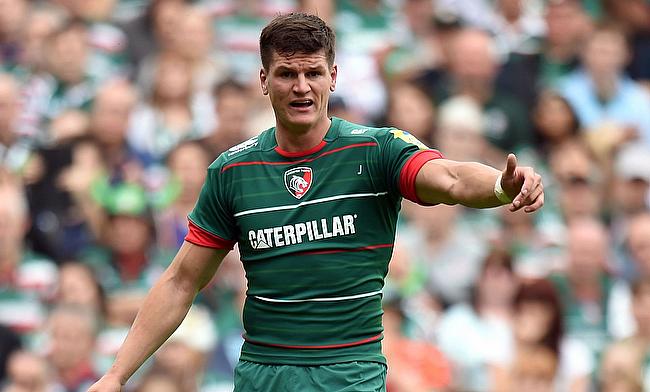 Freddie Burns was part of the winning Leicester Tigers side
©PA

The win is Leicester's 14th in 16 games as they consolidated their position at the top while Bath's struggle continued as they are languishing at the bottom of the table after managing just two wins from 14 matches.

Leicester started the proceedings early in the 6th minute as Jasper Wiese dived from close range at the back of an attacking line out and Freddie Burns kicked the conversion to make it 0-7. Bath immediately responded in the 8th minute as Will Muir touched down after collecting a chip from Ben Spencer.

Orlando Bailey's conversion went wide as Leicester had a slender two-point lead at the end of the opening half.

The visitors doubled their tally in the 12th minute as Dan Kelly put Guy Porter to breach the defence of Bath and eventually Richard Wigglesworth touched down that Burns followed with the conversion making it 5-14.

The end of the opening quarter saw Bath lost Muir to yellow card for a tackle in the air but despite being down by a player, the home side dominated the remainder of the opening half as Max Ojomoh collected a pass from Bailey to dot down in the 28th minute and Josh Bayliss followed the suit as he sped past Leicester defenders to dive over the line.

Bailey also kicked a penalty and a conversion as Stuart Hooper's men went on to the break with a 20-14 lead.

Both the teams were desperate for a breakthrough which eventually came in the 53rd minute as Burns threw a dummy and used the space on the right to score and also kicked the conversion to make it 20-21.

The end of the third quarter saw Bryce Hegarty extend the home side's lead to four points while Bath came close to a try-line but was denied by Leicester's defence as they maintained their impressive form this season.