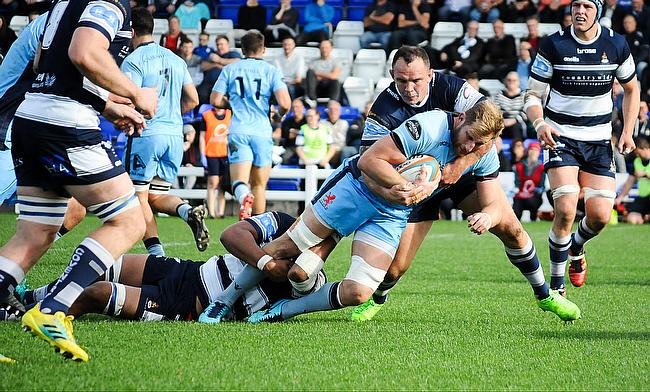 Louis Grimoldby Exclusive: “The generosity of our community means we can take our place in the Championship"
Exclusive: Doncaster Knights Joe Ford on returning to play and having a strong Championship
Championship competition set to kick-off from 6th March
Exclusive: Elliot Chilvers - It was nice to feel valued as an individual

If you know of the Championship and of London Scottish, then you most certainly know of Mark Bright.

The evergreen New Zealander joined the Exiles a decade ago, cementing himself as a firm fan favourite in that time. Racking up 169 competitive appearances and a phenomenal 91 tries for the side probably speaks for itself.

Before that, he spent five years turning out for Redruth and Tasman, relaying across hemispheres and playing year-round between 2006 and 2011.

Now 42 years of age, the No.8 has been a Championship mainstay over the last decade, with a stint at Ealing sandwiched in-between eight seasons at Scottish.

This coming campaign will be the first that Bright and Scottish haven’t been a part of since he made the move to the capital, with the club feeling unable to compete. RFU funding cuts were a large contributor to the decision, already forcing the Exiles to scale back into a semi-professional model following the announcement last March.

Gutted i won't get to play @Champrugby this season but after getting no grant club had no other choice.

It should have been a year to celebrate firsts and lasts for the club, but it has turned out to be quite the opposite. Forwards coach Stevie Scott was set to step up as head coach, whilst Scottish were bidding farewell to the Richmond Athletic Ground, their home since 1894.

“We’re furloughed at the moment, but we don’t really know how long that’s lasting,” Bright said. “I think it’s up until April, but we’re not sure about May yet. Obviously, then pulling out of the Championship hasn’t really helped any of the players.

“I just think with the grant not coming in and the option just being a loan, financially, the club just felt they couldn’t do it, which is probably a smart decision. It’s a bit of a shame because we would’ve rather played the season out and had one final fling at the RAG before we moved onto pastures new.

“I thought there would have been more clubs potentially pull out, but obviously, they just wanted to get on with it. I don’t know where they’ll get the revenue from, especially with no crowds, so it’ll be interesting to see what happens."

With relegation from the Championship suspended for the 2020/21 season, which is running from March until June, London Scottish and their talisman should at least be able to retake their place in the division for the following campaign.

By that time, they will be nearing 18 months on hold, and with players still to be contracted and decisions still yet to be made, it’s proving to be an incredibly tricky period for the club and its squad.

“I’m still in the process of looking for work,” Bright added. “It is pretty hard with the Covid situation. It’s just one of those things. It works out a little better with the kids all being home, so I can help out my wife with homework.

“With the funding cuts, the club were already moving to a part-time model, which is a bit of a shame, but you can see why they had to do it. It’s a big change for guys having to go out and work during the day then train at night.

“We started training at night, three nights a week. When I first moved to Scottish 10 years ago, we were part-time then, so we were training two or three hours during the day and then coming back with the part-timers training at night. I’ve done it before, so I wasn’t too fussed.”

The nature of the situation, and the Covid testing system, also means that players are unable to consider short-term contracts elsewhere. They are effectively hamstrung to sitting on the sidelines whilst the other 11 clubs return to Championship action in a few weeks’ time.

Despite being in the twilight of his career, perhaps this is being presumptuous when it comes to Bright. His desire to get out and play is still as strong as ever and those years he spent flip-flopping between Cornwall and his homeland have contributed a great deal to his prolonged playing days.

“I enjoyed it,” he said. “I would finish a season at Redruth, have a few days, jump on a plane, try and time it so I would land on a Tuesday or Thursday back home and then I’d go straight to training that night to try and stay awake. I’d then rip into it and do that season, then come back and go again.

...and he's just re-signed for another season at @LSFCOfficial ?

“I found it easier being match fit than trying to get fit during pre-season. I just enjoyed it more and it’s probably one of the reasons why I’ve been able to go on for a few more years than people thought I’d be able to, because I’ve missed about seven or eight pre-seasons which I don’t mind at all!”

Whilst his age may have risen, his performances haven’t waned. Bright is widely considered as one of the league’s greatest players during his time in the Championship, collecting accolades and plaudits aplenty along the way.

Much has changed in the rugby landscape over those years, with the Championship no exception. It’s clear that Bright has a huge affinity with London Scottish and the league, and whilst there is plenty of positives about the English second tier to highlight, there have also been numerous opportunities missed to develop it.

“I just think it’s a great competition,” he added. “You get the warmer months at the start of the year where everyone’s flying the ball about left, right and centre then as soon as winter hits, it’s literally driving mauls and scrums. You come across some pretty bloody big forward packs in the Champ!

“You have 22 games and then you’ve got the cup thrown in so you could potentially play over 30 games a year which is quite a lot of games of rugby to be playing at that sort of level.

“Maybe they [RFU] don’t see the Champ as a viable competition, though. It doesn’t get the exposure it deserves. You’d think it would get a bit more weight to it, especially with the coaches and players who come through the Championship and moved up to the Premiership and beyond.

“It’s a very hard competition the Champ and it gets harder every year, so why it doesn’t get the recognition, I don’t know.”

The apparent undervaluing of the Championship from key stakeholders means talk again turns to the potential of ringfencing. With relegation already on hold for 2020/21, there is a feeling that shutting shop on the Premiership may be inevitable over the next few years.

One of those who are pushing for a place in the Premiership are Bright’s former club, Ealing. Having developed and recruited to great success in recent years, they will be as keen as anyone to retain the dangling carrot of promotion, having finished as runners-up for the past three seasons.

“The way Ealing are going I can’t see why they can’t make it. I was there for two years and they’re an ambitious sort of club. They’re definitely aiming for the Prem. They were aiming for it when I was there a few years back.  I think if they continue the way they’re going, they’ve got a fair shot at getting there.”

His time with the Trailfinders saw him make over 50 appearances whilst captaining the club, as well as lifting the British and Irish Cup before his return to London Scottish.

With no sign of Bright slowing up just yet, there are further milestones on the horizon and plenty left to play for, meaning any consideration of retirement has been shelved, not that it had been given much thought.

Despite occasionally feeling his years, Bright is raring to go again, just like he was when stepping off a long-haul flight in time for training back in the day.

“Physically, I feel alright," he said. “It’s more after matches. It might take me a day longer to get back to normal. If I’ve played a Saturday, I might be alright by Monday. Now I still feel like I’ve been hit by a bus, but you get out and train and by Tuesday afternoon, you’ve come right. Other than that, physically, I’m probably in better nick than I was in my 20s.

“Hopefully, I can play a few 7s or 10s tournaments in the summer to try and keep fit there. I want to play a few more seasons. My eldest son will be 16 this year, so if I can play a couple more, I might be able to get a little run out with him at some point. I’m nine away from my 100th try for Scottish so hopefully I can get that in 30 odd games for 200 appearances as well!”

If somehow you didn’t know of Mark Bright before, then you do now. London Scottish will be back, and unquestionably, one of the Championship’s all-time greats will be too.