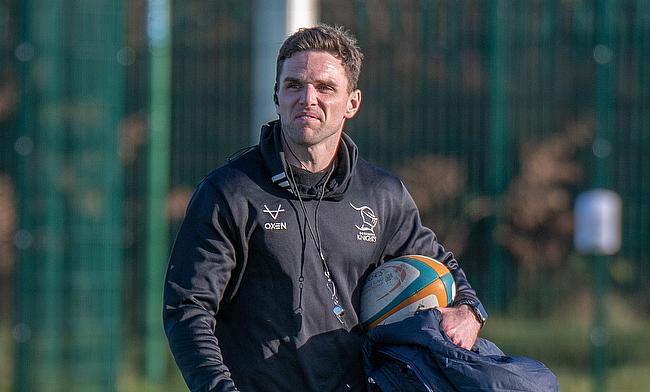 Championship competition set to kick-off from 6th March
Exclusive: George McGuigan - People can't question how hard we are going to work
London Scottish pull out of Championship season after rejecting government loan
Trying to end the frustration at Worcester Warriors

When Joe Ford was announced as Doncaster Knights’ new Backs Coach, it marked the end of his 11-year professional playing career.

Starting at Yorkshire Carnegie (now Leeds Tykes) when the club was still in the Premiership, Ford then went to Northampton.

On three more occasions, he returned to West Yorkshire between spells with Sale Sharks, Leicester Tigers and the Saints, but his final visit was the beginning of a transition into coaching.

Going to a Carnegie side in the midst of a number of financial issues as a player/coach, Ford jumped head first into professional coaching last April when he joined Doncaster Knights.

Unfortunately, the global pandemic hampered his development as a coach and due to the RFU return to play protocols, Ford found himself repeating the same coaching session several times a day at Castle Park.

However, with the fixture announcement for the 2020/21 Championship season dropping this week, the excitement for Doncaster and Ford can now begin to build.

“It is a challenge when you have got, for example, eight players in a session and you are trying to put in some play and a bit of attack when there are normally 15 on the pitch and you can’t really socially distance, so it is a challenge,” Ford said. “All I have ever known is training as a big 30-man squad. It is a lot easier to plan like that.

“But the way the lads have got a good understanding of it and when we have come as a team, we have been almost ahead of where we would have been if we had just started as a team because everyone has had a little bit more detail given to them individually.”

Doncaster’s 10-month wait for a return to play came to an end two weeks ago when the team took to the field to take on Ealing at Castle Park.

Their start couldn’t have gone much better with the on-loan Tom Bacon scampering over the whitewash, with Sam Olver adding the extras.

Whilst the Knights would eventually lose the fixture 46-26, there were plenty of positives to take for a side that a week earlier had had their opening game of the Trailfinders Challenge Cup against Saracens cancelled as a result of several positive Covid-19 cases in the Sarries camp.

Coming up against the former Premiership and European Champions this weekend, Saracens have not won a game since their return to play in January. Having lost to Ealing twice, Mark McCall’s side will hope to get back to winning ways at the StoneX Stadium when the South Yorkshire outfit comes to town.

“I know they are in the Championship now, but Saracens probably are still up there and rightly so with what they have achieved,” Ford said. “They are the biggest club in England and it is a bit unique about how this opportunity has come about for Doncaster in particular, to be playing Saracens. It really shouldn’t happen, but it has and you have got to see it as a positive.

“For the lads to come up against some of the very best players and the best-coached team in the country, it can only be a positive if they put their best foot forward. Everyone will be watching so it’s a brilliant opportunity.

“The hardest thing, I say hard, but it is not hard when you see what is going on, but the hardest thing for the coaches and players was not knowing when we were going to play. The first session back, everyone was energetic, because you would have had seven months off and you were just happy to be in.

We CANNOT wait to get going.

“But the longer it went on and you were expecting an announcement, it didn’t happen, then you get to Christmas and you’re like ‘surely it is going to be soon’. That was the hardest thing. Since we have come back in the New Year, being able to watch a game and prepare the team to play against someone is just really refreshing and something to look forward to which is what rugby is all about, isn’t it?

Ford is now part of the new coaching group that has taken the reins at Castle Park as Steve Boden settles into life as Director of Rugby, with Nathan Smith arriving from Loughborough Students to take on the role of Forwards Coach.

As Backs Coach, Ford has had the somewhat unenviable task of finding a way to breakdown a Saracens team that got to the top of the club game thanks to their defence.

Playing Sarries once when the Championship season starts in March, Ford says he feels very fortunate to be part of professional club rugby given the immense challenges in the game due to both RFU funding cuts and the effects that Covid-19 has had.

“If you look at the country now, the way the game is, there is probably 16, 17 teams in the whole of England who are lucky enough to be full-time,” Ford said. “I have been blown away by the facilities and the setup. I was probably a bit, I suppose the word is ignorant, about how well run the club is.

“If I have played in Yorkshire, it was always with Leeds, who were seen as the number one club. But from day one, you come in and the facilities are as good as any club I have been at. They have got it all on one site; a 4G pitch, loads of indoor facilities, a gym that has got everything it needs.

??? @_JoeyFord was pleased with the energy and enthusiasm on show against Ealing at the weekend and is hoping to build on the performance against Sarries on February 13th. https://t.co/jBrCm6yA8l

“I was blown away with how many full-time staff they have operating, just around the facility and that was the attraction and then the longer I have been here, it has got even better really.”

Playing plenty of rugby in the Championship during his career, Ford has nothing but respect for the competition. He helped Yorkshire to sixth and fourth-place finishes in 2011/12 and 2012/13 before the side reached the play-off final in 2016/17.

Over the years, Ford has seen many players go on to progress from the Championship and having spent time in the division as well as the top-flight, the 30-year-old believes the second-tier needs to thrive.

“I just know whether there is relegation or not, I do believe this country needs a strong Championship," Ford said. "I know Bodes has had countless phone calls off Premiership clubs these past couple of weeks who are desperate to get their lads coming through game time in a competitive game.

“Whether they ringfence it for a couple of years just to keep everyone financially secure, if that is the way forward, then fair enough, but they have to strengthen the Championship for me and keep it as professional as you can so you can then give these up-and-coming players, like Tom Bacon playing at the weekend from Wasps, a chance.

“I think there is many more like him who have been sat around, training for the last eight months. You have got to play as a kid and the best way to do that is playing adult rugby in a game that matters, which for me is the Championship.”