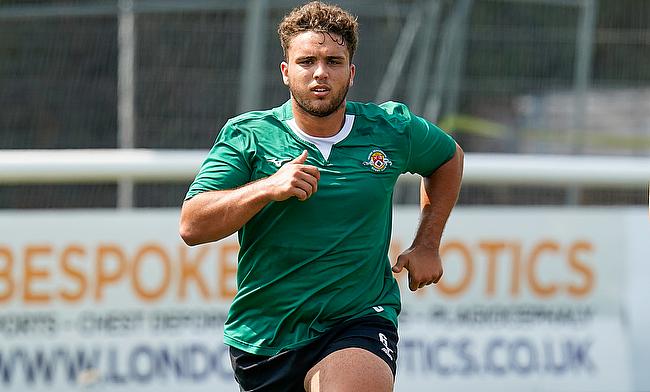 Three weeks on from beating Saracens 27-26, Ealing Trailfinders will be making the 11-mile journey to the StoneX Stadium to try and repeat that feat on Saturday.

Ealing currently sit top of the Trailfinders Challenge Cup table, thanks to that win over Sarries and their victory on the road at Doncaster last weekend. Travelling to Castle Park, Ben Ward's side actually went behind early on before rallying to eventually win the tie 46-26.

One player making his Ealing debut was loosehead prop Elliot Chilvers. The 20-year-old put pen to paper last week and he joined Declan Raubenheimer in signing professional terms at Trailfinders Sports Club. Both players originally joined the club as part of the scholarship programme with Brunel University, London.

Starting his Marketing and Marketing Managing degree in 2019, Chilvers played 14 games for Team Brunel last season as they gained promotion. Having also progressed to the Trailfinders Rugby Academy, he says he was delighted to sign on with the club that gave him an opportunity after finishing school.

“It was one of those things where I had been working hard throughout the whole of pre-season and I was really happy to get rewarded for that and Wardy (Director of Rugby, Ben Ward) made it clear that he has got big plans that he is keen for me to be a part of,” Chilvers said.

“So, I was very happy to be signing with the club that gave me a shot after leaving school. It has been really good.”

At U18’s level, Chilvers was regularly involved with Northampton Saints, but after not receiving an offer to be part of the Senior Academy, looked elsewhere to further his rugby career.

Finding the scholarship programme ran by Ealing Trailfinders and Brunel University, it offered the young prop an opportunity to play at the highest level possible, as well as gain a degree that will help him transition into working life once his playing days are over.

Named as the Coaches Player of the Season in the Academy last season, Chilvers has been regularly involved with the first team since his arrival in West London from Ipswich two summers ago, making the transition to full-time rugby all the easier.

“I was integrated pre the first lockdown and the pandemic,” Chilvers said. “We would come in each week and boys would get integrated and in and you would train and be involved.

“I remember my first week here, coming straight out of school, I was involved for the first week and managed to be travelling reserve for one of the preseason games last year and that was a really good experience and opportunity.

“It was a weekly thing where they would try and integrate you and then it has become full-time now.”

When travelling the country to find the correct degree and rugby programme to immerse himself in, Ealing quickly stood out ahead of the pack for a very simple reason.

“So, it was really nice to feel valued as an individual that they wanted to develop. That was really valuable for me and something that I really enjoyed.”

In recent weeks, Ealing have made a number of high-profile announcements that will hopefully help with the long-term success of the club. Their partnership with Brunel University and Henley College have been strengthened, with the rugby scholarships programme extended to include women, whilst the College also launching a Girls Elite Rugby Programme.

Even this week, Trailfinders announced the construction of the new Centre of Excellence at Brunel University, which will be a state of the art gym to be used by Trailfinders Rugby Academy players, which will also have a new 3G playing surface next to is and is being funded by the Mike Gooley Trailfinders Charity.

Chilvers is very much part of the first wave of players to make the step up from the scholarship programmes to the Ealing first team, as the club’s 20 year journey to try and reach the top-flight continues.

“To be part of that and to try and drive that (the club forwards), it will be a massive part of my career if I can help Ealing get in the Premiership and do what I can to be part of that will be something very special and it is something that kind of drives me, so I am on the same wavelength as what Ealing have got here,” Chilvers said.

Chilvers will not play a part in tomorrow’s Trailfinders Challenge Cup, with George Davis taking the 20-year-old place on the bench. Elsewhere, Craig Hampson and Craig Willis combine at half-back.

Recent South African import Bobby de Wee carries on his run in the second-row, whilst Kyle Whyte is the only change in the starting front-row, with Will Davis and Alun Walker maintaining their places.