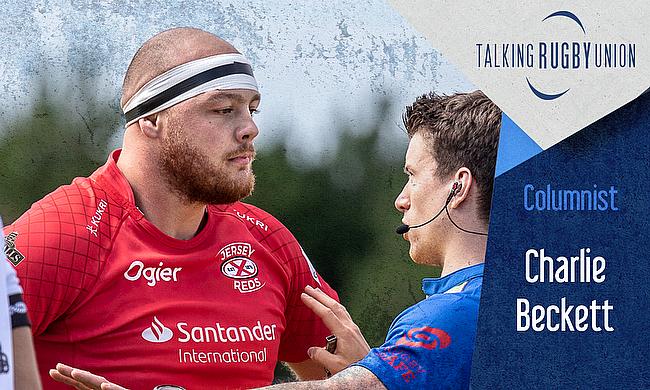 Charlie Beckett is in his third season in the Championship
©TRU

The Second Division
Championship clubs slam RFU over their decision to slash funding
Charlie Beckett Column: We could find ourselves in a very strong position

After today's announcement that the Championship would received reduced funding from the RFU next season, Charlie Beckett has penned his thoughts on events in the Championship.

I was going to do all that, but then today the RFU dropped their Championship bombshell and my plan completely changed. I’m afraid that now, this article will have a far more somber tone.

Before I continue though I have to make it absolutely 100% clear that these are my own personal views on the matter and not those of Jersey Reds Rugby Club.

For those of you who are unaware, today the RFU announced that they would be cutting the funding to Championship clubs by 40% meaning they would be providing each club in the league with £280,000 per season, roughly £200,000 less than this season and the previous three. Now while in the Premiership, individual players can earn up to and more than £280,000 a year, taking this money from each Championship club’s budget will, I fear, prove catastrophic.

Undoubtedly these cuts will affect every club in the league, and while some of the wealthier clubs such as Ealing and Coventry should be able to survive and comfortably run as a full time professional outfit, it is the poorer clubs in the league, who rely immensely on the RFU funding that I am worried for. A number of Championship clubs will now be forced to go to a semi pro and part time basis and this, I feel, is incredibly detrimental for all rugby in England.

This morning the RFU announced that they would be cutting funding to the Championship by some 50%.

TRUs Joe Harvey has offered his thoughts about the announcement.https://t.co/2S9v72LjKm pic.twitter.com/cy8O76Kxuq

Without this funding I don’t see how the Championship remains a professional league and this obviously minimises the opportunities for people working in professional rugby in England. Today, many players, coaches, physios, analysts and many others are wondering if, come June, when their current contract expires, they will even have a job. These are men and women who have families to feed and mortgages to pay, without being dramatic, this news will genuinely change their lives.

Now, unless you have played for, or been directly involved with a Championship club, I think you may struggle to understand the importance and significance the league holds. I know I didn’t fully appreciate it until I signed for the Jersey Reds and played Championship rugby week in, week out.

I realise a lot of you reading this won’t have been fortunate enough to have been directly involved with any of the said clubs so let me try and convey the importance of the league, by giving you a list of some of the England internationals who ‘cut their professional teeth’ in the Championship. Dan Cole, Tom Youngs, Ellis Genge, Lewis Ludlam, Mako Vunipola, Kyle Sinckler, George Kruis, Ollie Devoto, Jonny May, Luke Cowan-Dickie, Jack Nowell, Billy Twelvetrees, Owen Farrell, Harry Williams, George Furbank, George Ford and many more all began their professional careers with either full time or loan spells at Championship clubs.

Without a competitive second tier of professional rugby for young players to play in and learn their trade, where is the next generation of England players going to come from? I understand the RFU need to make financial cuts but I can’t help but think that in this case, they are being incredibly shortsighted and cutting their nose to spite their face.

On the financial side, I struggle to understand how the RFU can justify these drastic cuts to the Championship budget while paying their international players north of £20,000 a game for playing for England. I completely appreciate the work the players put in and the sacrifices they make and I absolutely believe they should be paid, and paid well for this.

However, when the match fees of one England squad, on one matchday, costs the RFU more money than supporting an entire Championship club for an entire year, it seems something is wrong. Sadly though it now seems fairly obvious that the RFU absolutely prioritises the men’s game at Premiership level and higher. The fact that the Championship clubs have no idea as to what level of funding they will receive from the RFU after next season is also, in my opinion, shambolic. How can any club, or any player playing for any of those clubs, be expected to make any long term financial planning with such a severe lack of information?

I believe this is the RFU taking their first steps on the road to ring fencing the Premiership, something that I think is a terrible idea for English rugby. To take away promotion and relegation between the Premiership and Championship ruins a lot of interest in a lot of games in the Premiership and effectively kills the competitiveness of the Championship on field. If there is no great reward for winning the league, why would you try all that hard to do it?

While we may not perform to the same level as Premiership and international players, we in the Championship do the same job as they do. We train the same way and we put our bodies on the line every day just like they do. We take the same risks to our physical health every time we step over that white line and while I am not saying I believe we should have the same funding or receive the same pay that the top level players do, I do believe that the least we should be able to expect is the backing and support of our governing body, unfortunately it is now abundantly clear that this is not the case.

I also have to question the timing of this announcement from the RFU. They are well aware that by February the clubs are well into their recruitment for next season and have already committed to contracts for players that they may now not be able to pay.

Also, for players who have yet to sign anywhere, it is now going to be nigh on impossible to negotiate anything resembling a good wage for themselves for next season because every club, understandably, will be tightening their belts in response to the cuts. It is very late in the season to be announcing news such as this which will have such severe consequences for so many people going into next season.

I love the Championship. It is a brilliant league full of brilliant people, from the players, to the coaches to the hundreds of volunteers who allow it to run and to exist. The thought that in the next few seasons it may not be around saddens me deeply. I hope my predictions are wrong and I hope that in some form or another the Championship does continue to exist, as a professional league, but, at the moment, with these cuts, I just struggle to see how that is possible.