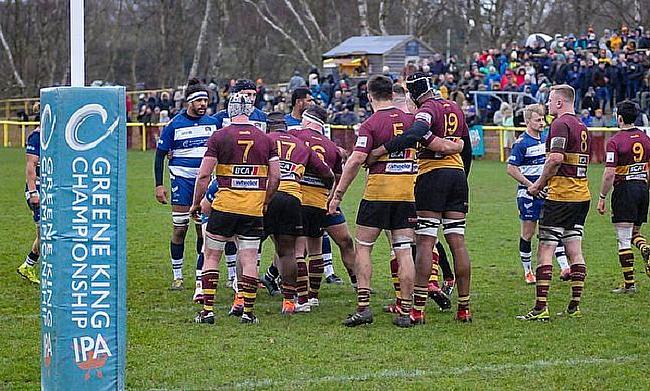 Exclusive: Doncaster Knights Joe Ford on returning to play and having a strong Championship
Book Review - From Tanqueray to the Championship: The History of Ampthill & District Rugby Club
Sam Hanks: I’d never heard of Ampthill in my life but this is a special club
Late drama sees Moseley and Cambridge survive as Ampthill clinch promotion

Being captain and backs coach of a Championship rugby club would be more than enough responsibility for most.

Combine that with being a cover teacher at Biddenham International School and Sports College, and you are looking at a remarkable roll call for 26-year-old Louis Grimoldby.

Since joining Ampthill ahead of the 2019/20 season, the fly-half has added many strings to his bow and is now playing in a semi-professional environment following a four-year stint in France.

It’s not uncommon for players at this level to work full-time jobs alongside rugby, but it is testament to their ability and commitment that they do so and still compete against fully professional clubs.

Rugby is unlikely to offer a lifelong occupation, so the ability to carve out a second career alongside the sport is admirable future-proofing.

“Most of our squad work as well as the rugby and because we train in the evening, it gives the boys the ability to have a proper job and a career outside of rugby,” Grimoldby said.

“I’m quite well self-disciplined and I still have ambitions to push on higher, so I don’t find it difficult to motivate myself to do the extra kicking and do my weights. If you want to do it, you can always find time. If anything, it makes it more enjoyable because you’re working hard and you get to go enjoy playing rugby.

“I always thought long term that I’d like to go into teaching, so this opportunity to work as a cover teacher has allowed me to dip my toes in and also, we finish at 14:30. I can go to the gym and off to training so I can get all my extras in before we start at 19:00. I probably do as much now as a semi-professional player, rugby-wise, as I did as a professional player.”

Last season was Ampthill’s first in the second tier after rising through the leagues and it was a squad which successfully blended a mix of youth and experience. The likes of former Premiership winners Soane Tonga’uhia and Dave Ward helped the club to a fifth-place finish after Covid-19 had cut the campaign short.

“I think we probably did exceed expectations, but I think we were also aware of the fact that when the season finished, we still had to play Newcastle, Ealing and Bedford at home, then we still had to travel away to Coventry, Jersey, Nottingham and Doncaster so we still had some really big fixtures left,” Grimoldby said.

“Whether we would have finished fifth at the end of that I don’t know, but I think certainly in the 14 or 15 games we did play, we exceeded expectations in the league.”

Tucked away in thick Bedfordshire woodland, the matchday experience at Dillingham Park is unlike most, providing Ampthill with five of their eight wins last season: “Where we play, we have the benefit of the walk through the trees and the woods. You arrive and it’s a little changing room. The weather often means the wind blows down through the valley so it can be quite challenging.”

It seems a far cry from some of the away days Grimoldby was afforded in France’s Pro D2, including the likes of Perpignan and Grenoble when he was playing for Massy.

After coming through at Harlequins, he took the plunge and made the move across the Channel at the tender age of 21, immersing himself in the wild world of French rugby, though not without a rocky start.

“I turned up and couldn’t speak any French, didn’t know anyone and was put in this random apartment which wasn’t quite what I expected so it was definitely a difficult start, he said. “There were moments after a week or two where I was thinking I couldn’t do it and needed to get home.

“But it figured itself out in the end. I would definitely encourage anyone to go out of their comfort zone and play abroad because you learn a lot and you see how things are done differently.”

Presided over by LNR (Ligue National de Rugby), the same body who operate Top 14, the Pro D2 is a fully professional league, acting as a genuine pathway to the top division and with a TV deal to boot.

There is much to be envious about for a floundering RFU Championship, completely disconnected from the metropolis of the Premiership, severely underfunded, underappreciated and frankly underrated.

The RFU Council has voted in favour of no relegation from the Gallagher Premiership or the Greene King IPA Championship for the 2020/21 season.

“There’s a huge support base for the French clubs, there’s investment and they’re all under one body,” Grimoldby continued. “Everything is controlled and both leagues are trying to pull in the same direction.

“There’s decent investment in the second division with TV rights and sponsorship from large companies and local business. You can see by the way clubs can go up to Top 14 and don’t necessarily come straight back down that the gap isn’t that big.

“Whereas if you look at the Championship to the Premiership, the gap is huge. Even Federale 1 into Pro D2, the gap isn’t that big because a lot of them are professional teams with budgets that are probably bigger than most in the Championship.”

Just 13 different clubs have competed in the 12 team Premiership since 2015/16, with the side being relegated bouncing straight back up on each occasion.

Compare that to the Top 14 where 17 clubs have contested the top division in that period - despite the suspension of promotion and relegation in 19/20 - and it’s even more apparent just how much of a closed shop the Premiership is.

The RFU Council have voted to scrap relegation for the 2020/21 Premiership and Championship seasons, meaning that 13 teams will contest the 2021/22 top flight, with whoever wins the Championship playoffs joining the current dozen.

What that means for following seasons is yet to be confirmed, but it would appear that a move towards ring-fencing the top league is inevitable. The full repercussions for the Championship, should that, occur remains unclear as does any perceived plan for the division.

“Having played in Pro D2 and Federale 1 and seen the way it functions there with promotion and relegation as well as Top 14, it works well but that’s because there’s been investment in the second and third divisions,” Grimoldby said.

“I am not necessarily against ring-fencing the Championship. If they ring-fence it and then invest in the Championship for 10 years until the standard improves to a level where you can get rid of it and have two leagues which are competitive, then it will probably benefit everyone in the short and long term, providing some stability to clubs.

“But if the plan is to ring-fence and then just leave the Championship to die a slow and painful death, then it doesn’t really benefit anyone other than 13 teams at the top. Your participation pyramid becomes smaller and you will lose players from the game at all ages.”

“The route to the top becomes narrower and you risk losing whole communities to different sports. We’ve got a team in the Championship which has come through the leagues because there has been promotion and relegation. The club from a community perspective has got bigger and bigger, with more kids participating, more community members and it’s thriving.

“But you take away a club’s ambition to get promoted, then you’re also potentially taking away the dreams of young kids who can see a clear pathway at their club to move through the teams and into a high-level first team.”

It will have been 357 days between Championship fixtures by the time the 2020/21 season finally gets underway on 6th March, with the schedule now announced.

Much has changed in that period. Yorkshire Carnegie were relegated to National One where they have reverted to their Leeds Tykes moniker and they have been replaced by Richmond, who make an immediate return from the third tier. You then add in Saracens who drop down from the Premiership then factor out London Scottish who will sit the season out because of financial reasons.

Only in the last couple of weeks have the final few clubs confirmed their participation in the league for the coming season. Financial constraints caused by RFU funding cuts of up to 75% and crippling losses through the pandemic left it touch and go as to whether teams would return at all.

For some clubs, including Ampthill, it took generous crowdfunding campaigns to generate the funds required to take their place, with Covid testing set to cost each club around £120,000 over the course of the season.

“Obviously COVID is a significant contributor, but even before that, they were planning to cut the funding halfway through a season when clubs have probably signed players on two-year contracts. It just shows there’s a complete lack of care for the wellbeing of the clubs financially and from a player’s perspective,” Grimoldby said.

The RFU cuts were then compounded by the fact that Championship clubs were only offered loans and not grants as part of the Winter Sports Survival Package and despite the future of some teams up in the air, it makes it more remarkable that only London Scottish will not be participating this season.

“Ampthill are probably lucky in a sense. We’re a semi-professional team with many volunteers that are the heartbeat of the club so our costs and our losses won’t be as great as some other Championship teams who are full-time professional, employing multiple staff behind the scenes.

“It’s hit the squad pretty hard, but I think we’re maybe in a better position than most to move forward because we’re already in that semi-professional environment. I think the pandemic, budget cuts and no rugby has caused a few clubs to think about what the best way to move forward is.

“I know our place was hugely under threat, and the fact we all thought the club would get a grant and then only loans have been offered has made it hugely difficult. For a club like ours, it was never a real option to take a loan and potentially put the club’s future at risk. Obviously, we were hoping to get a grant to cover the testing. It is down to the enormous generosity of our supporters and community that we can take our place in the Championship.”

?? Five tries for Sarries as they overcome Doncaster Knights at @StoneX_Official Stadium!#StrongerTogether ????

Despite all the unrest and uncertainty, Ampthill will be one of the 11 clubs taking their spot in just under a month’s time in a truncated 10-match schedule which includes a trip to Saracens.

Sarries’ fall from grace is well documented, but it now provides a huge opportunity for Championship players like Grimoldby to test themselves against the game’s elite.

He said: “It’s almost like the FA Cup really, it’s not every day a ‘small’ club like ours gets the chance to play against European Champions with top internationals and British Lions players. Whether they play or not, it’s still Saracens.

The Ampthill journey will continue and Grimoldby will be hoping to play an integral in the club’s latest chapter.