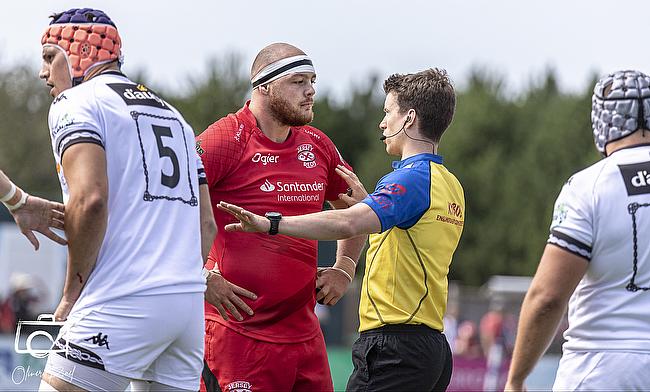 What is it like to be an S&C at a pro rugby team?
It's encouraging that we've done as well as we have - Robinson
Nottingham coach Fowkes praises 'foundations' after positive start
Jersey is the right place to try and make that step back up - Augustin Slowik

“I think we’re pretty happy with how the season has gone. Our first three games didn’t go the way we wanted, we had chances to win all three and we let them slip,” started Jersey Reds’ Charlie Beckett.

“What was important is that we got losing bonus points in those games. So when we did start winning, we climbed up the table quite quickly and went on a good run of 10 games undefeated.

“Now, we just have to kick on for the second half of the season, we’re happy with where we are at the halfway point, but that’s not where we want to be come May.”

Moving to Jersey in the summer, Beckett came to the Championship having been involved at a senior level with Premiership juggernauts Gloucester and Leicester. After being offered an academy contract at Gloucester in his final year, Beckett knew that the best thing for his career was to take a step down into the second tier.

“It became quite apparent speaking to a few coaches that I trust, my agents and my family, the best move for me was going to be the Championship,” he said. “You look at the track record that the club has of producing players that then go to Premiership clubs, especially in the forwards, is quite exciting.”

Beckett made it clear that his long-term goal is to get back into the Premiership and has already learnt a lot since becoming a regular at Jersey: “I’ve learnt a lot coming down a league, being a part of the team, not just part of the squad.

“I’ve been lucky that I’ve played in every game of the season for us. I’m very much a part of the team. Whereas, in my time at Gloucester and Leicester, between the two clubs, I played 11 first team games in four seasons.”

“If I’m honest with myself, I didn’t force the issue to go and make a chance for myself. I’ve had a look at myself in these past few months as to why I didn’t get a chance. As much as there is no doubt that I was unlucky and didn’t get chances, I have to look at myself and ask ‘why didn’t you get the chance, Charlie?’”

Beckett’s move to Jersey coincided with the start of a tackle height trial in the Championship Cup. The trial restricted players to only making tackles below the armpit line. This trial came after research found that 47% of match injuries were associated with the tackle.

“Every player I’ve spoken to is frustrated by it. Not the law as such, but the inconsistency in the way it is officiated. Every referee seemed to have a different idea about what a high tackle was. I don’t blame that on them, as I think they were struggling with that just as much as us.

“It led to quite disjointed games with a lot of penalties. This led to frustration in the players, who would then release that frustration by giving away other silly penalties, making the game more disjointed and a worse game to watch and play in.

“If there is research that backs up the tackle height law which significantly reduces the number of concussions in games, then I think it is definitely something that we’ve got to incorporate. I can’t stress this enough, I’m all for anything that is improving player safety. That’s so important, especially around concussion because you only get one brain and you have got to look after them.”

“The big thing for me is taking Yorkshire Tea bags with me, because I can’t drink any other tea. I forgot them the other week when we went to London and I was devastated.”

Isolated on Jersey, the Reds squad is a tight knit group of players, who become their own social circle. For anyone that follows Beckett on social media, you will see that he and his housemates will regularly do puzzles, something that the lock admits he takes too much credit for.

“I live with George Eastwell, Brett Herron and Will Homer and it’s George that does most of it. I reckon of the last 1000-piece puzzle, Will and Brett probably did less than 10 pieces each. I’m doing shy of 50 and George is doing the rest. He’s our main puzzler.”

Beckett then elaborated on things that the rest of the squad liked to do in their down time: “There’s also a lot of coffee getting drunk. I think if certain players left, coffee sales in Jersey would decline rapidly. A few cafés might go out of business. We play a lot of cards, there’s a cinema club, just your usual stuff. It’s just little things.”

When asked about his goals for the rest of the season Beckett’s answer was simple: “My long-term aim is to get signed by a Premiership club and go back to the Premiership. But, right now, all I’m focused on is doing the best job I can for the Jersey Reds.”