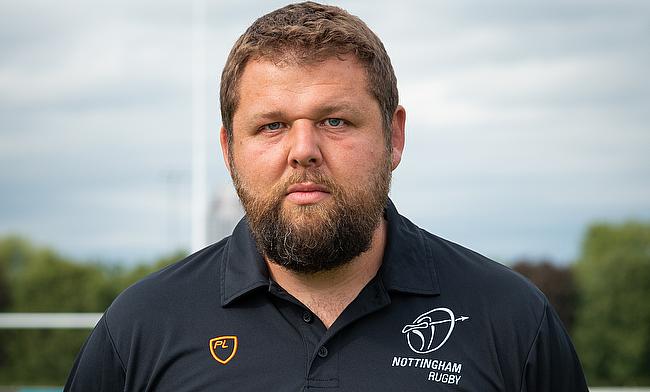 It's helped me develop as more of a team player - Farnworth
Jersey is the right place to try and make that step back up - Augustin Slowik
Newcastle Falcons continue to harness the development of university rugby
Ben Williams on life after Cardiff Met, his move to Ealing and his aims in the Championship

“I’ve been at the club since I was seven years old, down at Ireland avenue,” started Neil Fowkes.

“I went down there as a young man to learn the game of rugby and I’ve been involved ever since. I’d be playing rugby on the Sunday, but also go down and support on the Saturday.”

“You’d watch these guys running around, for example Chris Gray. He was a fantastic second row and he was named man of the series by the New Zealanders on a Lions tour. He was my first senior forwards coach at Nottingham Rugby. Having watched him and then being coached by him, that was pretty special.”

Fowkes reflects on some of his early memories with the Midlands club, but now he is charged with carrying his boyhood team in the right direction.

He succeeded Ian Costello as the head coach of Nottingham in the summer after Costello moved to Wasps to be an assistant coach. Fowkes’ involvement at Nottingham goes all the way back to 1987 when he joined as a seven-year-old.

Going on to play first team rugby for 12 years, Fowkes retired in 2011 and moved straight into the dugout as a coach. “Ian (Costello), Martin Haag and Glenn Delaney before that, all laid down some really good foundations at the club. So, basically, it’s about coming in, putting your own stamp on things and doing things your own way.

“When Ian came in, he picked up where Martin had done a really good job and put his own spin on things. Ian drove different levels in different areas that he felt was important and it’s just the same when I’ve come in. It has been such a great foundation to have, it’s just about putting my own mark on things.”

No stranger to having the top job in rugby, Fowkes led Nottingham Trent University (NTU) into BUCS Super Rugby during his time at the institution. Fowkes gives a lot of credit to NTU for helping him adjust to life as the head coach of Nottingham Rugby.

“Nottingham Trent University has given me a great grounding for being a head of rugby, director of rugby, at that level,” explained Fowkes. There are some transferable skills to bring over. A lot of stuff off the field, stuff you’re not necessarily exposed to as an assistant coach or as a forwards coach.

“I learnt about dealing with things off the field, managing players, recruitment and retention. Whilst at NTU, I learnt to develop some of those skills; dealing with partners, dealing with stakeholders, managing a full squad and a full programme.

“Obviously, it’s a different level when you step up to the Championship, but the same skillset applies, it’s been a really good apprenticeship.”

Fowkes continues to speak glowing about his time with NTU and praises how NTU’s sports performance overall has picked up, with the rugby programme being the catalyst for this.

He added: “It was essentially a brand-new programme with a different way of looking at university sport, whilst trying to maintain the ethos of what university rugby is, but also bringing a professional edge.

“Rugby Union at Trent was the forerunner or the performance programme at NTU. Across the board the university have pushed on in hockey, football, lacrosse, netball and even table tennis.”

“Nottingham Trent are looking to become a top 10 institution for sport an they’re well on that path. I like to think that rugby had a big part in doing that in the initial stages and will continue to do so, along with all those other sports.”

Having taken control at Nottingham Rugby this summer, Fowkes’ side sit fourth in the Championship table. They have also picked up impressive wins throughout the season, the most notable victory coming over Ealing Trailfinders at the Bay.

Now that the brand-new Championship Cup has begun, the competition is being used as an experiment on tackle heights. Like on previous Championship interviews, this seemed like the perfect opportunity to see what a head coach’s opinion of the laws are.

“We actually adopt a low tackle focus and anyone who analyses us will see that,” said Fowkes. “For us, it’s just about being even better at what we’re already quite good at. We think there are going to be some positive kick-on’s in the game that will help and will make the Championship an even more attractive product.

“If you look at the Championship, there are fantastic tries scored every week, there are high scoring games. We just want to embrace it and we’re really looking forward into going out and showing that.”