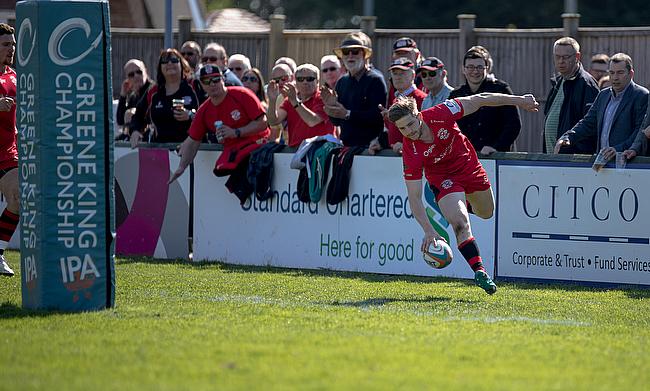 Jersey Reds’ Augustin Slowik talked to TRU about moving to the island, the new tackle law, his brother and his future hopes.

Moving to Jersey in the October of 2017 following spells at Worcester Warriors and Northern Suburbs, Slowik carried on the form that saw him become one of Bristol’s standout performers when they gained promotion in 2016.

With 19 tries in 28 games at Ashton Gate, Slowik was one of the most lethal finishers at the club. Two years later, the fullback is still a regular try scorer for Jersey in the Championship.

“I know that there’s a lot of boys that get signed from Jersey and go back to Premiership clubs,” the French-born back said honestly. “In in order to make my next move forward, I had to step down and it felt like Jersey would be the right place to try and make that step back up to my next professional club.”

Jersey has been a training ground for some Premiership regulars in recent years. The likes of Newcastle Falcons’ Gary Graham and England prop Harry Williams have both gone on to greater things since passing through the doors at the St. Peters rugby ground.

Not being connected to the mainland, Jersey have the added challenge of having to travel by plane to every away game. However, Slowik doesn’t see this as an excuse; “If we look for excuses we can use it as a get out.

“Ideally, we wouldn’t have to fly to every away game, but we have enough spare that it doesn’t affect us. It’s always nice to have a weekend off the island, so some boys actually look forward to it.”

Finishing in fifth position last season, 38 points adrift of champions Bristol, Slowik anticipates an improvement from his club this season in what many are predicting to be a close Championship season.

“All the boys know that we can finish top three,” he said. “That’s what we’re going for. It’s such a long season.”

However, Jersey have lost their first two matches of the new campaign against Coventry and Bedford Blues. Reflecting on their defeat to Cov, Slowk added: “They physically challenged and probably matched us up front for 25 minutes. It took us quite a while to break them down. Then we were sloppy in certain areas of our game, which they capitalised on.”

With two tries in the opening two games of the season, Slowik has a knack for crossing the whitewash. Not a bad characteristic for a versatile back and Slowik doesn’t shy away from his defensive responsibilities.

Now having to contend with new tackle laws in the Championship Cup, Slowik is interested to see how the new laws fare in competition: “There have been a lot of concussions in rugby, so it could be a good thing, but we’ll have to wait and see.

“If there are 25 to 30 penalties in a game for high tackles around the chest then it’s probably not going to be the best rule. We won’t really know until we play in one of those games.”

In 2015, Slowik’s younger brother, Lucas, was forced to retire aged only 19. At one point the youngest player in the professional era to play in a competitive game, Lucas was just 17 when he played his first game for Bristol.

“It’s probably one of my biggest motivating factors,” Slowik said on his brother’s retirement. “We managed to play 69 minutes, or one full game (for Bristol), together in a cup friendly.

“Obviously it (playing professional rugby) got taken away from him. Not because he wasn’t good enough, but because of injury. It was made even more important for me to try and do well because I want to make my brother as proud as I can.”

Asked about his future, Slowik was honest: “I want Jersey to do as well as possible and if Jersey do well then hopefully come the end of the season, I’d love to try and move to France.

“I want to move forward and if the right move is to go to the Premiership or a Top 14 or Pro D2 team in Franc, then all I can do is play well every week and we’ll see what comes towards the end of the season.”

Jersey Reds’ next game is away to London Scottish on the 22nd of September.