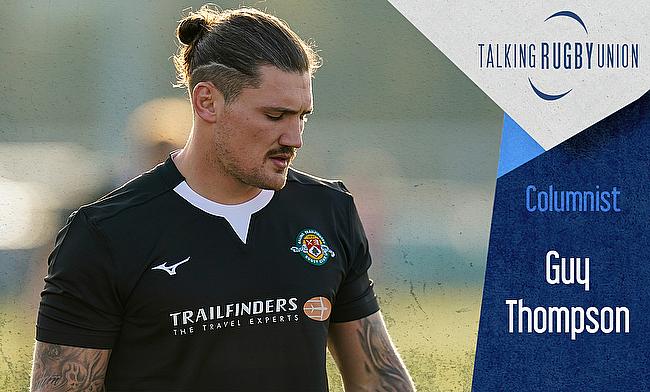 In his latest column for Talking Rugby Union, Ealing Trailfinders’ Guy Thompson reflects on a successful pre-season for the club and looks ahead to the start of the Championship campaign.

Before we played Newcastle back in November, I hadn’t played a game of rugby for 365 days or something silly like that! Home and away against the Falcons, it was really good to test where we were as a squad. That gave us a really good indicator that what we were doing in the off-season was right. We were disappointed with how we played away from home, but it was two games back-to-back, a six-day turnaround and a long journey so we had lots of positives to take from it.

Going into the tournament [Trailfinders Cup], many people from the outside said it would probably be silly doing this tournament, it wasn’t worth it and that Saracens would walk it. I think we used this tournament to really show people what we are going to be about this year.

We are obviously ecstatic about winning the tournament. We play rugby to win silverware. Let’s be honest, it wasn’t the strongest Saracens team the first time we played them, but it was pretty much their strongest team the second time - bar the internationals - so it was a great opportunity to test ourselves. We know they will be a different team when they have those internationals, but we can only beat what is in front of us and so far, we are on the right track.

We have no excuses

The pre-season schedule has been massive for us. There was a huge influx of new players at Ealing. You can train and train as much as you like, but you don’t build cohesion and don’t build those bonds until you play some games.

Credit to Ben Ward and the coaching and medical staff, they have handled this lockdown superbly. We have had the opportunity to consistently train and consistently push ourselves in training, but they have given us games and it hasn’t just been one or two. We have had nine games building into the Championship and the staff have kept the boys motivated and hungry.

Building into this league, we want to hit the ground running. It is only 12 games if you win it. That is half a season. You haven’t got time to feel your way into a season. You haven’t got time to eek your way in and catch up at the end. We have also given ourselves the opportunity that going into the season, we are not going to be caught cold and I think Ealing have done a fantastic job of getting us ready for this weekend when we play Nottingham.

We have also taken away the opportunity to have the excuse of ‘well we haven’t played.’ As far as we are concerned at Ealing and as far as I’m concerned as a player, there is no excuse for us not starting well. We have had something which has felt like a 30-week pre-season, but we have got into some unbelievable shape and we have managed to enjoy each other’s company.

While a lot of the world has been in lockdown, we have been able to continue training. Ealing have paid for our testing to make sure as players, we are in the best position to be able to carry this on and the only way we can pay the club and repaid the faith they have shown in us is to start this season well.

Saracens will go up another couple of levels, but how many levels can we go up as a squad?

Who thought we could have played Sarries before the league started?

I am not on about winning even though it is great, but we were able to test ourselves against what we think will be the benchmark for this season. Well, we have blown that out the water and we know they are going to go up another couple of levels, but how many levels can we go up as a squad? How many levels can we push ourselves to improve every single week in the squad?  I do believe we haven’t scratched the surface yet.

From the outside, many people got carried away with those victories against Saracens and a lot of people started hyping them up. We understand that wasn’t the strongest Saracens side we can face, but it didn’t matter. For us, it was about testing ourselves and we overcame that test. We are going to keep our feet on the ground, we are going to work incredibly hard and we know next time we play Saracens, we are going to have to be another couple of levels up.

There is no point winning those two games in the Trailfinders Cup if it means we then lose in the league because this club's ambition is that we want to be a Premiership side.  All we are doing at the moment is putting ourselves in the best possible position to make that happen.

How about a 14-team Premiership?!

I put that tweet out there for a bit of fun and I got some cracking responses! People did ask me this a couple of years ago whether I believed in ring-fencing the Premiership. I said no because look at the excitement we had in the Leicester/Newcastle game with two massive teams fighting to stay up.

I still don’t believe ring-fencing is the option, but what I do believe is a 14-team league is the way forward. The reason I think this is because at the moment, there are 12 sides in the Premiership with one side always going up or down.

Let’s be honest, Ealing have finished second the last three years. Given the opportunity and the money they would get if they got relegated, they could reinvest and really give it a go in this 14-team league. Not only would it spread the England international players out amongst the league, but it is also going to create more squad numbers and more playing opportunities for more English and more British guys. If there are 14 teams in the league, keep the salary cap as it is, but start bleeding through the young guys.

14 team prem? Genuinely think this is the time for real change! https://t.co/pLmQBzpOn8

I also don’t believe 13 teams in the Premiership next year is fair. If you have a bye-week the first week of the season, it is like you have just had an extra week pre-season. If you have a bye-week seven or eight games in, you can go really hard for six or seven games and then you can give your whole squad a week off. I don’t understand how the fairness falls into this?

There is obviously a lot more questions than answers at the moment for a lot of people and to everybody who messaged me saying Ealing have to do something to go up, I never mentioned Ealing. All I said was a 14-team league; why not explore the option?

You all know as well as I do, there will be reasons behind things and at the moment they are not clear, but we will see as the season goes on.

With all of this, we are also not underestimating any other team in this league. I understand there has been a lot of media hype from the outside mentioning Saracens and us, but I know it is a cliché, but we are only looking at one game at a time. That is a blessing in itself only having 10 games.

You can’t get too far ahead of yourself. It is 10 games and it is a 10 game shootout. We have to respect every single opposition we come up against because you don’t get a second chance. We just have to make sure that every single weekend we turn up, we are the best we can possibly be and put a statement out. If we don’t turn up, we will lose and that could be our whole season derailed so we have to focus on ourselves if we want to reach our target.