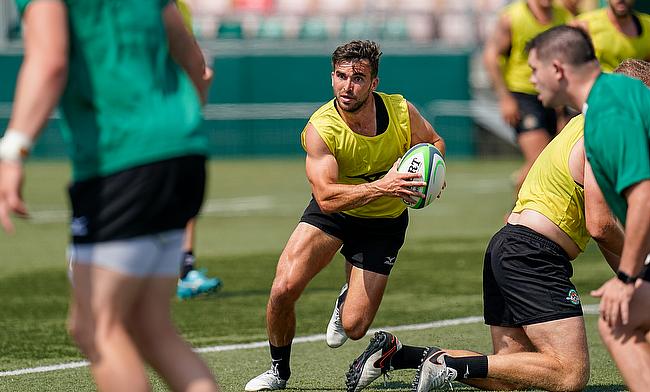 Following the cancellation of European competition for the next two weekends, the Trailfinders Challenge Cup will be the only form of rugby taking place in England.

The tournament, which will be across six weekends, will include Ealing Trailfinders, recently relegated Saracens and Doncaster Knights. It will also act as a pre-season for the three teams as they prepare for the Championship campaign scheduled to start in March.

Unlike many Championship sides, Ealing have been able to experience pre-season fixtures already. Playing Newcastle Falcons on two occasions and then Bristol twice as well, the Trailfinders Challenge Cup, which has been organised by club owner Mike Gooley, is an opportunity for the team to build up for another run at promotion for the Premiership.

“When we had the Newcastle games, they were pretty big for us,” Ealing Trailfinders scrum-half Craig Hampson told TRU. “It gives you a focus of what you are actually looking to do, rather than just training to get better. The Bristol ones, the teams, changed slightly, but it was still a good focus for the whole squad.

“We went away for Christmas, hoping to be back for some Championship stuff. Obviously, that wasn’t going to happen, so to have these games to focus on is really good. We are doing the same things we normally do, but it is nice to have that different focus because we have got a game.

“It has been really good that Ealing have been the driving force behind this competition, and it is awesome that we have got this focus. There is no other rugby on. That doesn’t really change anything for us, but it will be nice to have other people watching.”

Joining Trailfinders in 2019 from Wasps, Hampson is also the Head Coach of the Ealing Trailfinders Elite Player Pathway (EPP) U18 side, which has established partnerships with The Henley College and Brunel University.

In the recent games against Newcastle and Bristol, several of the Academy players have been handed opportunities with the first team and in the past few days, 19-year-old fly-half Declan Raubenheimer has signed a fully professional deal to play for the first team.

Having originally joined the Scholarship Programme at Brunel University, the South African is now the first member of the Trailfinders Rugby Academy to sign professional terms. On reflection, it is a landmark day for the club and the pathway which is being established in West London to ensure the club's long-term success.

“They have just announced that Declan Raubenheimer has been the first guy to come through the Brunel programme to get a first-team contract,” Hampson said. “He has been going really, really well in first-team training.

“He is really authoritative, which you don’t often see from the young guys, so I think he has been a star coming through and there are definitely some boys behind him who are going to be coming through as well, so it is nice to see them getting their opportunities.”

In recent weeks, Trailfinders have announced that their partnership with Brunel University, with the rugby scholarship programme, is now being extended to include women. Having only been available to male players since its establishment in 2018, Ealing now hope to build a “world-class hub for female rugby players”.

The Henley College are also launching a Girls Elite Rugby Programme in order to fulfil a long-term aim of running a programme for women alongside the men. Due to his heavy involvement with the U18 EPP, Hampson believes that the recent growth is due to how effectively the Academy is run.

“For that pathway to be in place, now every year there will be boys coming through and they can handpick the best ones from there,” Hampson said. “It’s a great talent pathway. Glen Townson was running the coaching this year and he has done so well because they are all running the same shape as us. Everything is the same, so when they slot in, there is no new learning for them.

“They don’t feel out of their depth, they know what the calls are, and we do the same with the U18’s. When they move into the Brunel pathway, it is all the same calling structure, shape and pattern, so it is really easy to transition through. They can focus on their rugby rather than having to worry about all the new calls every time they move up a level.”

You can now purchase the stream for the Trailfinders Challenge Cup opener against Saracens on Saturday afternoon!

When the Championship season does finally roll around in early March, Ealing will be placed in Conference B of the restructured 2020/21 competition. Playing Bedford, Richmond, Doncaster, Coventry and Nottingham in the group stage, each league winner will take part in a two-leg playoff final to decide who will be promoted to the Premiership.

When the first Championship games of the season kick-off, it will be nearly 12 months since most teams will have played a game at all. In the summer, Hampson’s former Wasps teammate Guy Thompson joined the club along with Levi Davis, Angus Kernohan, Will Davis and Lewis Thiede. All arriving in West London, their experience in the Premiership could help Ben Ward’s team gain promotion to the top-flight.

The Trailfinders Challenge Cup is very much a start of that journey and Hampson says competition within the squad is helping ahead of the pre-season that could put Ealing on the road to success.

“We had a really good training session the other day where everyone was just trying to get stuck into each other and fighting for their places, and that’s one of the other good things about having a strong squad,” Hampson said. “The competition for the starting shirt each week is really strong, and it is not a set 15 that is going to start each game.

“There is a lot of boys who are on the same level and fighting for their shirt every week in training, which makes the standard of training each week really high, so I think we are really looking forward to it. We just want to go out there and show what we have been doing in this long pre-season and hopefully get some wins.”